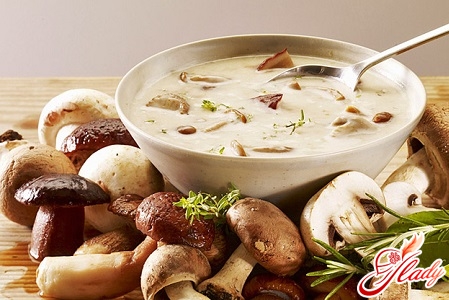 Mushroom soup a few people can leave indifferent. It has an amazing aroma, a unique rich taste. In addition, the mushroom soup is nutritious and useful. He is indispensable in fasting, as well as in the diet of vegetarians, because of their nutritional value, mushrooms can compete with meat and are a full-fledged source of protein. At the same time, fat is practically absent in them, which makes them suitable for dietary nutrition, in particular, for vascular diseases. In addition, the mushrooms contain lecithin, which cleans vessels of harmful cholesterol. They contain antioxidants, a lot of potassium, zinc, copper, as well as vitamins A, B, D, PP. You should know that there are more nutrients in the cap, whereas in the stem there are relatively few vitamins and microelements. Recipes of mushroom soups can be found in almost all cuisines of the world, and they are presented in a wide variety. This is due, above all, to a large number of species of edible fungi. To make a delicious soup with mushrooms, it is necessary to understand that different mushrooms in the soup manifest themselves in different ways. The most aromatic soup is obtained from white mushrooms, boletus, podberezovikov and rozhikov. Less nutritious, but no less delicious mushroom soup can be cooked from champignons and cherries. They are grown artificially, do not accumulate environmentally harmful substances and are widely used for cooking different dishes, including soups. Mushroom soup can be prepared from fresh, dry, frozen or salted mushrooms. To make soup fresh and dried mushrooms must be sorted. At the same time, freshly polluted and wormy fruits are removed from fresh mushrooms, insects infected with larvae, moldy and decayed from dried ones. Fresh mushrooms are cut off the bonnet (except champignons), clean the legs, while removing the lower part contaminated with earth. Then carefully and gently wash with cool water. To prevent the champignons from darkening, they are put in cold, acidified water. Before brewing, large specimens can be cut into smaller pieces. Dried mushrooms should be pre-soaked in a small amount of cold water for several hours, and then cook. 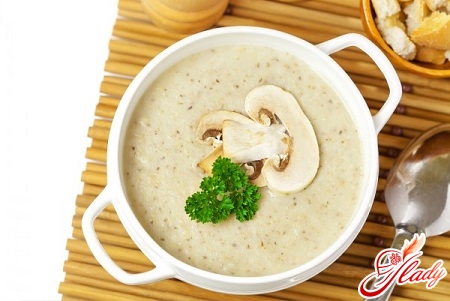 Mushroom soup is prepared, as a rule, on broth,resulting from cooking. There are recipes, where the basis is taken vegetable broth or meat broth. As additional ingredients can be used potatoes, carrots, onions, zucchini, noodles and various groats: pearl barley, buckwheat, rice. Very tasty soups are obtained with the addition of shrimp, cheese and cream. The best spices, which advise you to season the soup, are dill, parsley, onion, garlic. How to cook mushroom soup correctly to preserve the flavor of mushrooms? Do not add a lot of salt and bright spices, and to preserve the taste is not recommended to prepare a dish on high heat. Mushroom soups, depending on the consistency, are divided into the following types: classic soup, cream soup and cream soup. Recipes of each type are distinguished by cooking technology. The first are prepared simply: all the ingredients are boiled in a certain order. To make the right soup puree, all components must first be boiled, then using a blender, grind and mix with the broth. Cream soup with mushrooms is prepared by the same technology as soup puree, only with the addition of cream or butter. Here are the most popular recipes for simple and delicious soups with mushrooms.

Soup with fresh mushrooms and potatoes

This is a recipe for a simple classic soup with mushrooms. To prepare the following ingredients:

To make mushroom soup, you needPre-prepared mushrooms cut into pieces of medium size and fry in oil. Carrots, parsley and onions finely chopped and separately passerated. Put the mushrooms in a saucepan, pour 2 liters of hot water and cook for 30 minutes over medium heat. Then put the potatoes, diced, and toasted vegetables. Add salt, add pepper, bay leaf and cook for another 15-20 minutes. In the soup add sour cream to taste, sprinkle with chopped greens. Make this dish more satisfying if you just add noodles or some of the cereals - buckwheat, rice, pearl. You can diversify the recipe with other vegetables, which will make soup even more delicious.

Soup with dried mushrooms and vegetables

To prepare a mushroom soup with this recipe, you will need the following products: 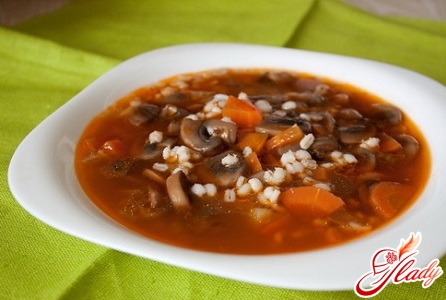 The dish on this recipe is tasty and satisfying. It is prepared very simply and quickly. Ingredients that are necessary to prepare mushroom soup with ears:

Pre-soaked mushrooms cook untilsoftness. Broth the broth, rinse the mushrooms. Bulb and carrots finely chopped, put together in a small saucepan, add 50 g of oil, pour water (1 glass) and simmer on low heat under the lid until the liquid completely evaporates and the carrot does not become soft. Put the vegetables in the broth, add salt and boil it for 5 minutes. The second onion finely chopped and fried on the remaining oil to light yellow color, there to add finely chopped mushrooms, salt, pepper and fry along with onions. Top up a little broth so that the stuffing is juicy. Make a dough, knead it well, roll it thin, cut it into squares with a knife. Put on each square a little mushroom stuffing, connect the two opposite corners of the dough so that the shape of the ear turns out, and protect the edges. 15 minutes before serving soup boil the ears, putting them in a hot broth. Finished ears will float upward. Soup can be served with sour cream.

Mushroom soup prepared according to this recipe, notwill leave indifferent the most demanding gourmet. It has a delicate flavor, has a wonderful aroma and is easy to prepare. You will need the following products:

Prepared mushrooms are cut and fried invegetable oil until the appearance of a golden crust. Cut the potatoes into cubes and cook until done. Onions, carrots and garlic are peeled and fried until softened in oil. Then grind with a blender. Pour the potato broth into a separate bowl, mash potatoes. Mix together the crushed vegetables and mashed potatoes, add 2 cups of broth from the potatoes and bring over medium heat to a boil. To fall asleep grated fused cheese and cook, stirring, till its full dissolution. Finished mushroom soup salt, pepper and let stand under the lid for 5-10 minutes. Sprinkle with herbs before serving. 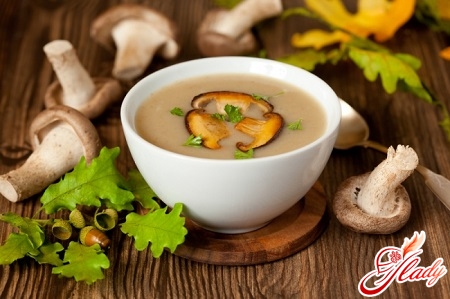 Such a dish is not difficult to cook at all, all products are available, and as a result you get a mushroom soup that everyone likes: both adults and children. The following ingredients will be needed:

Mushrooms must be defrosted beforehand. Carrots, potatoes, onions, garlic, parsley root and celery root should be peeled, washed and dried. Then the vegetables should be chopped: cut the onions into rings, carrots, parsley root and celery root - straw. Cut the potatoes into small pieces, chop the garlic. Fry on onion oil with onions until golden color, then add thawed mushrooms to it and simmer for 15 minutes until the moisture completely evaporates. Boil in 2 liters of water until cooked roots, carrots and potatoes. Then add onions and mushrooms, pearl barley and green peas. Immediately pour garlic, pepper, bay leaf and crushed green dill. Cook the mushroom soup for 20 minutes, stirring occasionally. For a few minutes until completely ready, add salt, cover and let stand for a while. Spread on plates and season with sour cream.

Soup with sauerkraut and mushrooms

This is a traditional Russian recipe. Mushroom soup is rich and nutritious. For cooking, you will need the following products:

Mushrooms, pre-soaked, carefullywash, pour cold water, add the onion and cook the mushrooms until cooked. Onions, carrots, parsley finely chopped, fried in oil, add sauerkraut, previously washed in cold water and well wrung out. Add a few spoons of mushroom broth, put the bay leaf, pepper, salt and put the cabbage out until soft. When the cabbage is ready, pour the rest of the broth into it. Fry the flour in 1 tbsp. spoon of sunflower oil, dilute the mushroom broth, season with these cabbage soup, add chopped mushrooms to bring to a boil. Serve with sour cream and chopped herbs.

Very unusual mushroom soup with a piquant taste and aroma. Ingredients for cooking this recipe:

Cut the mushrooms into small pieces, chop the onion finely. Cut the meat lightly fry in butter, add onion, mushrooms, tomato paste and simmer for 2-3 minutes. Then put everything in a saucepan with boiling water (1 liter). Peeled potatoes cut into small cubes and add to the soup. Salt, pepper, add bay leaf and cook under the lid until done. Ready mushroom soup pour on plates, season with sour cream and finely chopped celery.

Soup with vermicelli and champignons

Mushrooms rinse, cut into 4 parts and cook in 2 lwater for 40 minutes over medium heat. Onion and carrots peeled, finely chopped and fried in vegetable oil. Mushrooms get from the broth, finely chopped and lightly fried along with carrots and onions. In the boiling broth put first vegetables and mushrooms, after 5 minutes vermicelli is filled. Mushroom soup is cooked for 2 more minutes, then it is necessary to let it brew. After half an hour, pour soup on plates, season with sour cream and greens. A good complement will be crackers from white bread, fried in vegetable oil.