Peas as a food product known to mankinda long time ago. It was used for food in ancient China, in India, in Tibet and in ancient Rome. In the 19th century, German soldiers were daily fed with pea sausage, and the recipe for pea soup with ham was long known to the French and Spanish. For a long time our great-grandmothers in Russia knew perfectly well how to cook pea soup properly! From the book "Domostroy", which was written in the 16th century, we learn that in Russia pies with peas, pea noodles and pea soup were the most common dishes. Here is the recipe for an ancient soup of the 19th century in the southern regions of Russia.

Most often this simple pea soup people cooked during the fast. Ingredients:

To cook this pea soup, you need 3a glass of peas soak for about 4 hours. Put a spoonful of spoon (that is, a spoon with holes) in the rondel (the so-called ceramic pot for cooking), pour the peas with water. Put half a tablespoon of oil (if the post is something lean, sunflower, and if not - then creamy), a slice of stale bread, close the lid, let it boil over a large fire, then rearrange for a smaller one, as best as possible to boil the peas without salt, stirring with hoof (a special spoon with a long handle that was cut from a single piece of wood). Hot peas to pass through a sieve. Dilute vegetable broth, brewed from roots, fried 1 parsley and 1 onion in oil (half a tablespoon); adding flour (half a tablespoon), fry again, add peas, salt to taste and allow to boil. Pea soup, or kuleshik, serve to potaptsam (potaptsy - a dish like toasts, toasted or simply dried bread., Potaptsy dried to season them with peas or beans soup, borsch, etc.). 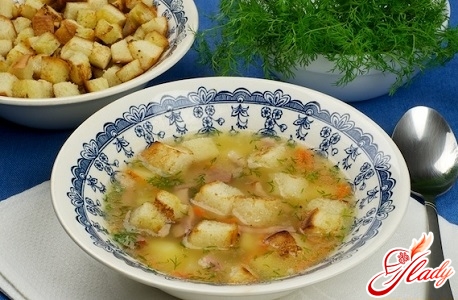 Recipes of pea soup of the Soviet period

A classic recipe for a delicious soup from the time of Stalin. Here is how it was customary at that time to serve a festive dinner: first they served a snack, which was located in different places on the table, then soup, after - a fish dish, a bird, a roast. At the end, dessert was served - fruit, cake. So this pea soup of IV. Stalin in any Soviet family could cook for the New Year or birthday. Pea soup with ham or smoked pork brisket Ingredients:

To properly prepare this recipe, at firstneed to soak the peas at night; cook broth from ham or smoked pork belly, then cook peas in it for 1.5 hours. Roots and onions are washed under running water, cut, salvaged, adding cow butter, put into broth 20 minutes before meals. Salt add to taste. This delicious pea soup is served with croutons cooked from dried white bread. 3 recipes of pea soup, which served in the Kremlin in the days of NS Khrushchev and Leonid Brezhnev

A simple man in the street knows for sure thatthe main kitchen of Russia is the Great Kremlin Palace. During the Soviet era, all the dishes that were prepared here were under great secrecy. Cooks, before getting a job in the Kremlin, had to undergo a multi-month check. And the secret of the Kremlin meals is that for them only the highest quality products were used, and with impeccable mastery of performance, the taste of the dishes turned out to be excellent. Perhaps, these 3 Kremlin dishes will become your family meals. Pea soup with smoked ham Ingredients:

To make this pea soup, at firstyou need to throw the tomato into boiling water for 1 minute, peel it off, thinly chop it. Chopped green onions and tomatoes, canned green peas in oil. After the broth has boiled, add pepper, salted vegetables, potatoes, cook for 3 minutes. Salt to taste. Cut the smoked ham into small regular shaped pieces, put in the soup and cook until cooked. Ready pea soup to serve on the table in a portioned dish, decorated with finely torn by hand dill (or parsley). Pea soup with pork Ingredients:

We begin to prepare this pea soup with the fact thatmy pork and place it in a pot of water. After the broth boils, salt and cook for 1.5 hours. Cut the cooked meat into pieces. Leave peas in the water for 3 hours. When the soup boils, add the peas, cook for 1 hour. Grate the carrots on a large grater, cut the onions into half rings. In a frying pan with preheated lean oil, put them out and fry until creamy. To make the pea soup tasty, add bay leaf and salted vegetables to the peas, add salt, pepper, cook for 10 minutes. Prepared soup pour into plates, put a piece of pork into each and decorate with parsley, dill (finely chopped). Delicious pea soup with pork brisket (smoked) Ingredients:

This pea soup differs from others in thatpeas, without soaking, pour water and cook the aldente (until half cooked). Peas are better to take yellow, peas should not be whole, but halves. To properly cook this pea soup, grate on a large grater carrots and fry in butter until browned. When the soup boils, put the brisket in the pan (cut into square pieces), peas, carrots, salt, cardamom, pepper and continue cooking for about 1.5 hours. On the table, serve soup hot, put in each dish a dessert (a dining room, a tea room - someone like it more) a spoonful of cream. And such a pea soup was brewed (and now brewed) in the Far East, in the southeast of Russia and even in Mongolia. Pea soup with tomato juice unusual for Muscovites Ingredients:

For the correct preparation of this recipe you needfinely chop the onion, fry in margarine or oil. Add cold meat broth. Green dry peas, which was soaked in water for the night, put in broth and, welding, wipe through a sieve. Add tomato juice to the soup, season with pepper, salt and cook for another 10 minutes on low heat. In each plate put a spoonful of sour cream or cream. Usual homemade pea soup Ingredients:

Cook the pork shoulder and peas, adding to the brothonions, carrots, peppers and salt. After 1.5 hours cooked onions and carrots to take out of the soup and shredded tolks, put back into the pan. There also add bay leaf, cut potatoes. In the finished pea soup add oil and greens. To this soup you can make croutons.

This is an easy dietary first dish especiallyit is good in late spring and early summer, when young potatoes and pods of green peas appear on the garden beds. Peeled and cut into small rectangles potatoes pour 2 fingers above the hot water and cook for 10-15 minutes, then add to the soup, buttered onion, green peas, milk and bring to a boil. Delicious vegetarian pea soup is ready!

2 recipe of pea soup of our days

This pea soup is the right way to start cooking withthe fact that chopped small chopped boiled-smoked sausage. Vegetables peeled, potatoes and carrots cut into small straws, onions - cubes. While the water boils, fry onions with cow's butter separately, carrots and sausages. Mix everything. In pots, put the potatoes, fried vegetables and sausage, salt and pepper to taste. Pour the hot broth and put it on the oven for 15 minutes. Serve pea soup to the table with sour cream, sprinkled with chopped herbs. Grandiose soup in pots with squid and green peas Ingredients:

This pea soup is the right way to start cooking withthe fact that the vegetables are cleaned, cut into strips and pasteurized with cow oil. Carcase the squid and cut into strips. In clay pots lay the vegetables, on top - squid, green peas, salt, pepper. Add hot water and put in the oven, heated to 180-190ºC for 20-25 minutes. Turn off the oven and leave the pots for another 10-15 minutes. Serve to the table in pots, sprinkled with herbs.

Soup with meatballs and rice with their own hands

Soup with cauliflower: a recipe for every taste