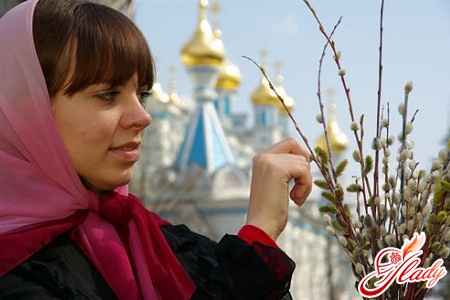 Palm Sunday is a great Christiana holiday celebrated in Russia since the 10th century. According to the Scriptures, it was on this day that Jesus went to Jerusalem, and from this began his path of suffering, which ended in a crucifixion. This holiday has acquired special importance also because it, as a matter of fact, is the last day of Lent.

history of the holiday

Already before our era at this time the Jewish peoplecelebrated the great feast of Easter, which was associated with the liberation of the God-chosen people from Egyptian slavery. That is why all believers on the eve of the future Palm Sunday flocked to Jerusalem for his celebration. And since even the oldest Jewish writings said that the King of Israel must come to this city, which will free believers from Roman oppression, many people came out to meet Jesus when he went to Jerusalem. Even those who do not believe that Jesus is the son of God went out to honor him on that day, because the tradition said that the King of Israel would enter the city on a donkey, which the future Savior did. Initially, this holiday and the week following it were called Vaiy week, which means a week of palms. Its name was given to the holiday, because the people who met Jesus in Jerusalem, laid out his way out of palm branches. However, there were no palms in ancient Russia, therefore, instead of them, as a symbol of this Christian holiday, the willow branches began to be used, because this very plant in our area after the winter cold wakes up the very first. On Palm Sunday, branches are illuminated in the temple. Traditionally, parishioners should depict a meeting of the invisible Jesus, thus paying tribute to an event that happened more than two thousand years ago. But today many believers just bring in the willow branches. Since this great Orthodox holiday falls on the last day of fasting, during its celebration it is forbidden to eat many foods. However, in honor of the Palm Sunday, some indulgences are allowed: you can eat fish and drink red wine, ideally Cahors. The holiday of Palm Sunday differs from other similar Orthodox holidays in that it does not actually have a pre-holiday and a sub-celebration. The Sabbath before the Palm Sunday is holy according to the scriptures. 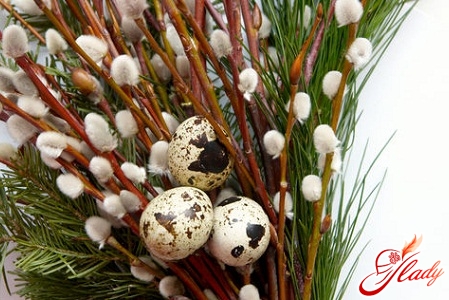 In ancient Russia in all cities with a large scalethey marked Palm Sunday: the holiday meant a big procession, in which all the city dwellers and clergymen participated. So, for example, in the capital at the head of such a procession was the Patriarch, sitting on a donkey, and the animal was led by the bridle by the king himself. In addition, in all cities so-called pampered bazaars were organized, which became a place of national festivities. Especially such bazaars were loved by children, because in addition to the pussy willow toys and sweets were sold for them. To each ligament of this plant was attached a veritable cherub, a paper angel, who was to protect the plant from evil forces until it was brought into the house. Orthodox believers usually store plants consecrated on Palm Sunday, throughout the year, believing that they are protecting the house. In addition, the branches of this plant are often taken to the cemetery or placed in the hands of the dead, to indicate that they too, like Jesus, can go through death, rise again and meet the Savior at his coming. The symbol of this feast is also attributed to healing properties. So, for example, it is believed that if a person eats nine cones, then all illnesses and illnesses will bypass it. If you put a willow in water and bathe in it a sick child, then he will quickly recover. And a willow branch, set on a window sill, will lead a thunderstorm from home. The barbs of this plant were also treated with infertility: during the Palm Sunday holiday of them baked bread for women who for a long time could not become pregnant. This bread could also be eaten by everyone else, because it was believed that it has a fortifying effect. Believers also thought that with the help of a willow, you can stop the fire if you throw it into the flames. And people with the help of the consecrated branches can get rid of their shortcomings and sins, for example, from cowardice and pride. 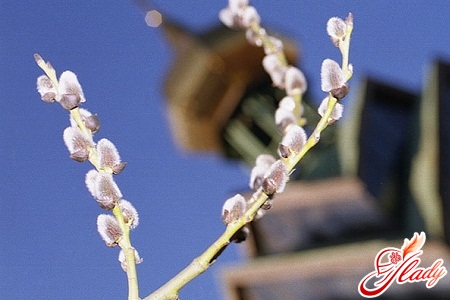 Palm Sunday in ancient times associated andwith all sorts of signs. So, for example, if this day turns out to be sunny, then in summer one can expect a large and rich harvest of wheat and vegetables. If severe frosts hit the pussy, there will be a good harvest of spring bread. What can not be done during the Palm Sunday is to drink the water collected there, where there is this plant. It was believed that devils and other evil forces often get into its thickets to keep warm, but when the willow begins to light, they all jump into the water as one. Therefore, having drunk such water, it is possible to take over diseases and ailments that are difficult to cure. The traditions of Palm Sunday are closely related to domestic animals and agricultural plantings. If you lightly beat an animal with a consecrated willow, then it will be of much use and no disease will stick to it. After returning from the church very often the owners did not immediately go into the house, and first planted several branches of willow in the city, which were supposed to help get a rich harvest. If there was a storm on the crops, a branch of the consecrated plant was also thrown at her side, which was supposed to drive him away. And to save the crops themselves, several branches were planted in the field. And such a custom still exists not only in Russia and Ukraine, but also in Belgium and Austria. Verba helps to recognize the evil forces, for example, witches and sorcerers, and does not allow them to enter the house where it is stored. And especially resourceful Christians even use this plant in order to find treasures. The Palm Sunday holiday does not enjoy such respect: it is celebrated only by believers and people who honor traditions. However, despite this, willow branches can be found in almost every home. Do you believe in the magic properties of this plant or not only you, but in many recipes of folk medicine, this plant is also often used to make various infusions and ointments. It is used as an anti-inflammatory and astringent, for the treatment of varicose veins, etc.

What to give a man who has everything?

Romantic gift to your beloved: we will try to surprise and please!

What to give to parents for a silver wedding: with love for mom and dad

Gifts for teens: how to please a grown up child