In modern life with its furious rhythm of timefor food, not to mention its preparation, is sorely lacking. Today, most people come home late enough, when the first thing you want to do is change your clothes and have supper. And here comes the dilemma associated with which dish to give preference. Of course, they are tormented by such questions mostly girls, because they are more concerned about their figure than the representatives of the strong half. Nutritionists say that the most useful option for a light snack at night is an omelette with milk. As experts say, a few hours before sleep, you should take protein foods - cottage cheese, eggs, fish, chicken fillet - which is well absorbed and does not stay on the body in the form of extra pounds. To make an omelette is more than an easy task, especially if there is an original and fast recipe at hand. We will teach you to cook an incredibly appetizing and nutritious dish in just fifteen minutes, so now you do not have to go to bed hungry.

Cheese Omelette with shrimps and spices

Since we are talking about dietary meals, the firstlet's take a look at the recipe, which is useful for every girl who follows her figure. To bring the weight back to normal, it is not necessary to exhaust yourself with diets and starve, the most important thing is to normalize the diet and use the right foods. So, fast carbohydrates in the form of oatmeal and other cereals, such proteins as fish, meat and eggs, it is recommended to eat for breakfast. Do not make big breaks between meals, have a snack with yogurt, kefir or vegetables. And for dinner it is better to cook a light, delicate omelet. It can be baked in the oven or fried in oil in a frying pan. The first option is more useful and less caloric. Which recipe to choose? You decide. Ingredients:

Cooking method: Let's try to make an appetizing omelet in the oven. So, in order not to waste precious minutes, turn on the oven and heat it up to 220 degrees. In the meantime, prepare the rest of the products: rinse and dry the greens, then chop it in thin strips or just break it with your hands. Peel the lemon from the peel and squeeze out the juice from it - it will take about two tablespoons. With shrimp, remove the skin and rinse thoroughly under the faucet, pour into a colander and allow to drain. Then divide the marine inhabitants into two equal parts, one of them cut into small pieces, and the other - leave it just like that. Milk should not be icy, so remove it from the refrigerator beforehand. Then combine with the eggs, for the sharpness, add chili, a couple of pinch of salt and favorite seasonings. You can make a mix of several spices - suited dried rosemary, marjoram and basil. Each housewife has her own recipe, thanks to which her dishes turn out to be fragrant and exquisite. Thoroughly whisk the resulting mixture, at the very end, enter freshly squeezed nectar. As for Parmesan, it should be grated on a fine grater. After that, combine the cheese, as well as whole and cut prawns with the above products. If desired, you can pour a few pinch of lemon zest. Stir well the egg mixture and pour it into the sautéed preheated olive oil. As soon as the omelette is sufficiently seized and covered with a crust from the bottom, turn off the hotplate and move the dishes into the oven. In the oven, the dish is baked for another seven to eight minutes. After cooling, cut it into portions, decorate with parsley and boldly start the meal. With a "sea" omelet, vegetable salads and cherry tomatoes are ideally combined. By the way, if you want you can slightly change the recipe, for example, in this way: shrimp, cut into slices, mix with the egg-milk mixture and bake in the oven. And the remaining whole seafood fry in a frying pan with butter. For flavor add seasonings, serve on a plate with an omelette. Bon Appetit! The following recipe is useful to everyone. Working women, who simply do not have time for culinary creativity, can use it to prepare a quick and satisfying dish for their beloved. Than to suffer from the stove, inventing original dishes, it's better to bake an omelet in the oven in 20 minutes, and devote the rest of the time to a loved one or spend it with benefit for yourself. This recipe will also appeal to men who have not yet met their life companion. Cut the vegetables, fry the sausages and beat the eggs, you will get an appetizing supper and will not remain hungry. Ingredients:

Cooking method: You can do an omelette in two ways. The first is more expensive in time, but the result is stunning. Separate yolks from proteins, having spread them into different dishes, whip each ingredient separately. After pour both mixtures into a deep bowl, add warm milk here, put a few grams of seasonings and salt to your taste. Thoroughly mix the products with whisk or mixer for four to seven minutes. Thanks to such a simple procedure, the omelet will come out very lush, tender and beautiful. It can also be prepared in another way: the following method is more popular. Just put milk together in one bowl, whole eggs and whisk. When you master the egg mixture, take care of the rest of the products. First cut the bacon into small cubes and fry it in a heated frying pan with a thick bottom. Fire should be minimal, in such conditions, fat is better heated. It is recommended not to cook the fat for more than five minutes. After the specified time, lay out to him sausages, cut into thin slices. Some use a common onion, but if possible take a sweet violet. He will give the dish a piquancy and an unusual taste. Peel the vegetable from the husk and chop it in thin half rings. Similarly, do with pepper, just first remove the core from it. Cut the tomatoes into small pieces of medium size. Now send the products in the frying pan to the meat ingredients, slightly increase the flame and continue cooking. After three minutes, when the vegetables become soft and the juice is released, fill them with the egg mixture. Cover the dishes with a lid and stew the omelet for a while. Before serving, cool it and sprinkle with finely chopped greens. The recipe will help make an appetizing dish and save precious time.

A useful omelet with green asparagus

All dishes are unique and good in their own way. So, citruses give the omelet fruit freshness, milk helps to make a more magnificent and attractive-looking product. Scrambled eggs on the water are not so beautiful, but less caloric. By the way, it's better to bake it in the oven. In the autumn-summer period, rich in tomatoes, zucchini, eggplant, you can make a dish with vegetables. There are a lot of options, so you just have to choose your own. Now let's look at another recipe - despite its simplicity, the omelet turns out to be tender and insanely appetizing. Ingredients:

Cooking method: Omelettes can be made both in the oven and in a frying pan, here each mistress acts at her own discretion. Let's start cooking: first, thoroughly washed asparagus, dry with a paper towel or ordinary napkins. Cut off from below about two centimeters, peel the stems from the top peel. Now bring the water to a boil, lightly salt the liquid and put the above ingredient into it - cook the vegetable for about five minutes. Then discard the asparagus and let it drain. You need to prepare a mixture for the future omelet: beat the eggs together with milk, a small amount of salt and spices until the air state. Chop up fresh fresh herbs as little as possible, and chop the cheese with strips. If you decide to bake the dish in the oven, heat it up to 200 degrees, then grease the inner walls of the heat-resistant dishes with olive oil, lay the asparagus on the bottom and pour everything with the egg mixture. Send the product to the oven, and when the omelet grasps and is almost ready, sprinkle it with Parmesan, greens and hold in a hot oven for a few more minutes. Directly before serving, sprinkle the dish with freshly squeezed juice. 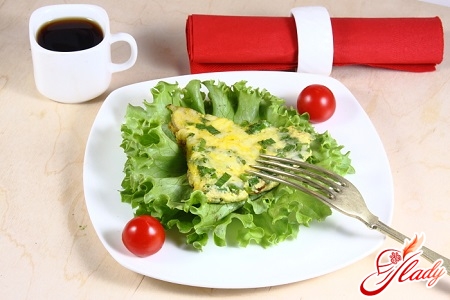 We already somehow mentioned the existence of a ratheran unusual dish - fried eggs with avocado. Surely not everyone has tried such a dish. The original combination of fruits with cheese and onions gives rise to a truly unforgettable taste, which can be enjoyed forever. Want to try? Then take the following recipe for a note, especially since it is very simple and does not require special skill from the cook. Ingredients:

Cooking method: First of all, cut the avocado into not too large cubes, then put them into the melted butter in the frying pan. Fry until the fruit is soft and light brownish-golden in color. Do not forget to pepper it, and also salt to your taste. You can add a pinch of fragrant dried spices. To cook the sauce for an omelette is not too difficult: chop the cleared bulb with thin half rings, then briefly put out in a sauté pan with fatty sour cream. Season with gravy spices and mix well. While it cools down, make scrambled eggs: for this in a different bowl, whisk the yolks and whites into a magnificent mixture, then combine it with milk and salt. Pour everything into a frying pan and cook a thin omelet. While it's still hot, put the pieces of avocado on top, sprinkle the dish with grated cheese and roll it into a roll. Before serving, cut it into servings and put it on the table with a delicious sour cream sauce. As you can see, from ordinary eggs you can make an original omelet. The imagination of modern cooks knows no bounds, the results of their creativity and practice are presented on this site. Learn the recipes and experiment with us!

Casserole potato with minced meat and mushrooms: reveal the secrets of home cooking

Casserole potato with minced meat in the multivariate: fast food