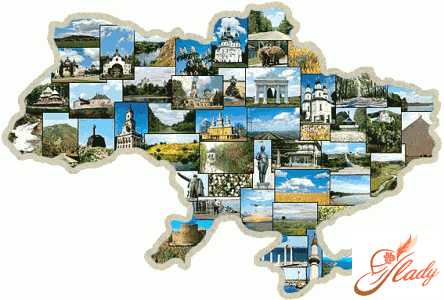 Soon the holiday season will begin and not everyone will be able toafford a trip to a foreign resort. But do not despair, you can have a great rest and in the territory of Ukraine, where there are many interesting places.

keep the traces of severalcultural and historical eras. For example, in the Zaporozhye region from the primitive communal system there were ancient stone sculptures, unique remains of dwellings from bones, which child would refuse to look at such a dwelling? From the Sarmatians and the Scythians, many fortifications and barrows have been preserved, and in the Crimea one can visit the ruins of Greek settlements. Ancient Russian architectural monuments were preserved in Kiev and Chernigov.

Kiev is considered one of the most beautiful cities in the world. A lot of architectural monuments - St. Sophia Cathedral, the remains of the Golden Gate, the Church of Our Savior on Berestove where in 1157 the founder of Moscow, Yuri Dolgoruky, the Kiev-Pechersk Lavra, the always lively main street - Khreshchatyk, the ancient quarters of the city, ancient museums and theaters, will leave an indelible impression among tourists.

On the territory of Ukraine Lviv is one of the most beautifulcities. It is remembered for tourists by a lot of cathedrals, ancient buildings, fortress towers. The streets of a small town of Uzhhorod will leave a lot of vivid impressions. The ancient town of Chernivtsi is picturesque and cozy. In the city of Lutsk, which was founded by Prince Vladimir, there is the castle of Lubart XIV century, as well as many churches.

The picturesque southern city of Odessa is located on theshore of the Black Sea. In the center of the city there are characteristic buildings in the style of classicism. In the suburbs are resorts with mineral waters, lake and limestone mud. A special pleasure you will get by visiting the famous Odessa market.

Crimea is a natural and cultural areaUkraine, the world famous resort area. This includes Yalta, the village of Gurzuf, Alushta, Livadia, Sudak, Planerskoe, Koreiz, Foros and Mukhalatka. In Crimea, the best Ukrainian port wine and wine are produced. In Yalta there is the Museum of the Institute of Vine and Wine-Making "Magarach", which was founded in 1828. You can ride a cable car to Darsan Mountain, this is the Ai-Petri Massif. Be sure to visit Massandrovsky and Alupkinsky palace-museums, the suburbs of Gurzuf, Gaspra, Simeiz, Frunzenskoye. For fans of mountain skiing in the south-western part of the country there are mountains of the Carpathians. In the north-east of Ukraine the cities of Dnepropetrovsk, Kharkiv and Poltava are interesting. In Dnepropetrovsk, founded in 1776, there are such architectural monuments as the Transfiguration Cathedral (XIX century), the Potemkin Palace (XVIII century). the city of Kharkov arose at the confluence of three rivers, as a defensive point from the raids of the Crimean Tatars. It is famous for the Uspensky and Pokrovsky cathedrals (XVII-XIX centuries), the great Catherine Palace (XVIII century). The oldest city of Poltava is known for the fact that under it Peter I defeated the troops of the Swedes, and in honor of this the "Column of Glory" was erected.

Where to go in the winter shopping tour

Sights of Paris: what to visit in the capital of France?

Where to go to have a rest in winter, so that even in summer there was something to remember?