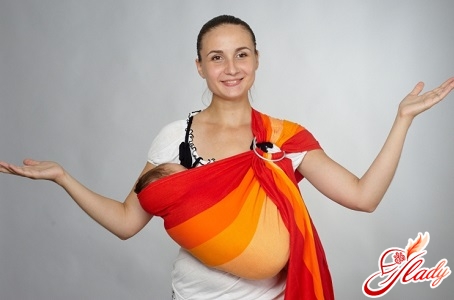 What they do not come up with to care for the baby! Diaper recycling, changing table, walkers, vibrokresla - this is only a small part of all that is presented in the modern market of goods and services for moms and toddlers. At the same time, there is a return to the sources in the parental environment - the so-called "natural parenting". In the framework of this paradigm, many mothers prefer not to use the nipple and diapers, prolonged breastfeeding and, of course, slings. What is a sling? This is a very ancient device, invented yet by our ancestors for wearing babies. Today it has become very popular and almost replaced bulky and inconvenient strollers, in which not so long ago parents have driven their kids, and even kangaroo backpacks. And it has a reason, because slings are incredibly convenient to use, much cheaper than strollers (you can even make them yourself), and the possibilities before your mother open simply incredible! Baby-slings are a bandage of straps, the length of which can be adjusted. In such a patch holder you can carry children from birth by two years. If the baby is always in a fixed position in the baby carrier, then in the sling it can sit, and be half-lying, and even lie down. In a word, babies in baby-slings take a perfect natural position, similar to their position in the hands of their parents. Thus, they develop well without any harm to their spine.

Advantages of using a sling

One of the main advantages of baby-sling -the possibility of changing the position of the child without removing the straps. After all, our kids during wakefulness are very mobile and do not like to wait while parents fasten buttons and tighten straps, as is the case with backpack-kangaroos. In the baby's sling, you can safely breastfeed, he can sleep there, play and learn the world, being completely safe. Slings quickly and easily put on and take off and do not constrain movements. Physicians hold the opinion that such a sling is the best option for the child's holder. Some of the types of such modern holders cause in children excessive stress of the lower back, which eventually leads to the pathology of the development of the spine. Slings practically exclude such situations. They well support the child's neck when he is not yet able to hold the head, and allow the kids to sit at a later age, cross-legged in Turkish. Thus, in slings, the child can be in a position that ensures a uniform load on his spinal column. In the holders of another type (for example, a backpack-kangaroo) the child's legs hang down, and the baby's still spinal column is subjected to a heavy load. Slings are not only a worthy replacement for a baby carriage, but also a way to ease the chores around the house at a time when the child is still very young and requires special attention. At the same time, it is a wonderful way to keep close contact between mother and baby during transitional existence. Just think: the child grows nine months, being one with the mother's body. And after birth, which in itself is a stressful event for the baby, he either lies in a crib or in a stroller, occasionally contacting his mother during feeding. Sling also helps to solve this problem, ensuring the proximity and continuation of the symbiotic relationship. 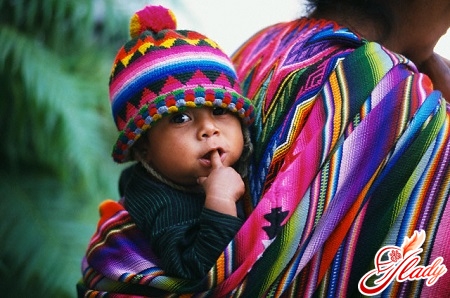 If you decide to purchase and mastersling, then you will have a surprise. Types of slings, of which there are many, cause the young mother to be confused (especially considering how many other things need to be chosen for the child). Therefore, before buying it is worth to familiarize yourself with their basic characteristics and choose the one that most suits your needs.

You can buy the most suitable baby sling,having addressed in online shop of слингов in which the wide assortment of such miracle-holders is presented. However, this is not the only option. At present, this product has become so popular that various types of slings are sold almost everywhere: in stores for moms and toddlers, in children's clubs, and sometimes even in the most ordinary outlets. So get it and enjoy the joys of motherhood! We advise you to read:

Games for children for the holiday - choose correctly

How to name a child?

How to choose a bicycle for a child

How to choose children's clothes and what to look for