Words of the classic "The lonely sail becomes white ..." firstcome to mind at the sight of this masterpiece of modern architecture. The previous words were said by us without the slightest bit of sarcasm. This hotel is really listed in the book "100 Wonders of Modern Architecture" and in fact deserves all the epithets awarded by idle idlers and people who at least one night have found shelter within its walls. If you still do not know what kind of building we are talking about, we will tell you - this is the Parus Hotel in Dubai. Burj Al Arab is the dream of every modern Assol. True, to see this white sail, standing on the shore of a nearby pond, is unreal. He will have to go to the United Arab Emirates, on the coast of the Persian Gulf. But it's worth it. Even if you do not find family happiness with one of the local Grays in the burnus, then you will rest by the highest rank.

With a truly Arabian scope

The propensity of UAE residents to grandiose projects,luxurious life and wide gestures is known all over the world. And the Hotel Parus is a living confirmation of this. But in this case this inclination is brought to the absolute. What does not detract from the merits of the hotel in the eyes of tourists and guests of Dubai. Hotel Parus is a truly amazing structure, rightfully bearing the title of architectural miracle of our days. The visionary Sheikh Mohammed, who was trying to turn Dubai into the best place for exclusive rest, ordered a hotel project to the British architect Tom Wright. He owns the idea to build a hotel in the form of a sail of traditional Arab dhow boats. In the past, the coastal waters of the bay were strewn with these boats. If we talk about the scope and try to enclose it in numbers (so it's easier and more understandable for perception), it turns out that in order to build the most luxurious hotel, we had to build a bulk artificial island in three hundred meters from the coast. Sail can not stand in the middle of the city! But then more than twenty thousand square meters of real Carrara marble were brought to the building site of the century. But this enormous expenses did not stop there. The thing is that the construction used not reinforced concrete blocks, but high-tech building cloth with Teflon coating. What for? And how else could you achieve a snow-white color of the "walls" of the hotel? Do not forget about the harmful effects of sand in the desert, the scorching sun and the salt spray of the ocean. So far-sighted Arabs decided not to waste time on trifles and used the best materials that can only be bought for money. Here it is worth adding eight thousand square meters of gold leaf, valuable tree species, designer furniture in the rooms and impeccable service. And you will understand that such a hotel can not be cheap and that each of the seven diamond stars denoting the level of comfort is here in its place. Best rest without leaving the hotel

At the time of its inception in nineteen hundredninety-ninth year, the hotel Parus was considered the highest hotel in the world. Now this title is worn by the Tower of the Rose, but here the most expensive in the world Hotel Parus remains to this day. The night in the most "simple" room overlooking the bay will cost about three thousand dollars. And this does not diminish the number of people who want to stop here. And how else, because the hotel is a small resort state within the state. You can spend the whole vacation without leaving the hotel and at the same time not denying yourself anything. If you urgently wanted to go to the beach - the list of services includes sending guests to the special elite beaches of Dubai. But if you are willing to be content with the pool, then the need to go out of itself. This isolation serves as a good bait for Hollywood stars, tired of paparazzi attention. 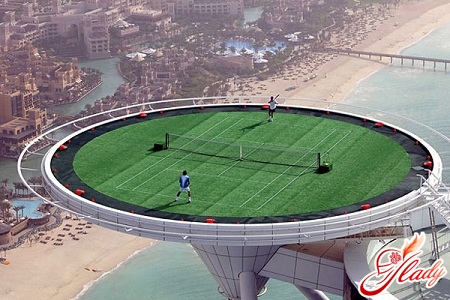 From the aquarium to the helipad

In order to enhance the sense of unreality,while in the hotel, you can go down to the Al Mahar restaurant. It is built around a huge plexiglass aquarium. Hundreds of species of exotic fish swim by, while you are delighted with fine dishes of French, Italian and Arabian cuisine. Absolutely reliable feeling that the restaurant is under the ocean water! If you gravitate to the heavenly expanses, you - upstairs on a panoramic elevator to the restaurant "Al-Muntaha", which is located at an altitude of two hundred meters above the surface of the earth. In addition to the fine cuisine, as a pleasant addition you get a stunning view of the Persian Gulf. By the way, this restaurant is chosen by celebrities from all corners of the world, because you can get to the hotel, remaining unnoticed for onlookers. Directly on the roof of the Hotel Sail is a helipad. But even if you do not have free three thousand dollars for a "simple" two-story room in the Hotel Parus, and admire this miracle from the inside very much want to - do not worry. Of course, it's just not possible to get to the hotel, but understanding and enterprising Arabs provided everything. There are special tea tours to the hotel. For miserable in comparison with the living price you can drink tea in one of the hotel cafe. And spend a couple of hours in luxury, worthy of this eastern princess.

Where to go to have a rest in winter, so that even in summer there was something to remember?

Barcelona: sights and history of the city