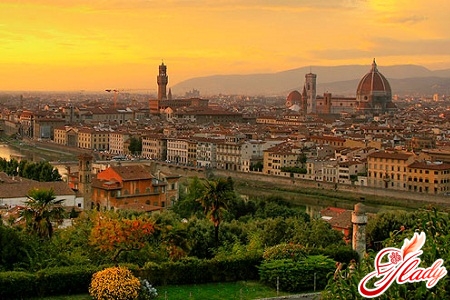 Florence and the Renaissance. These two names are closely related to each other - they are practically inseparable. Here, every corner is fraught with secrets of the Renaissance, there is still a spirit of victory - victory over the Middle Ages! This city was created by great people, those who inspired the world to new discoveries, who created immortal works of art, who showed people a world of beauty! In this city lived, built and died Alberti and Machiavelli, Michelangelo and Galileo. Here was born Dante Alighieri - the founder of the Italian language and Italian poetry, and many places in Florence are associated with this great man! Now we are not at all surprised that the famous French writer Stendhal, upon his arrival in Florence, experienced a "cultural shock". And after it many more tourists experienced and experience this shock, trying to know the splendor of Florence - the city of the Renaissance. Over the centuries, Florence has not lost its face. The city simply fascinates with its churches, palaces and quiet medieval streets.

Where to start - Uffizi Gallery

However paradoxical this may sound, thisThe majestic city is by no means large in size. Give valuable time to Florence's attractions, and they will not remain in debt, revealing to you the secrets of a new birth of the world! The Uffizi Gallery is the brightest and most memorable landmark of Florence. The gallery combined two buildings: the Mint, where once coins were minted and the church of San Piero-Scieragio, in which Boccaccio and Dante once performed. Here you can admire the originals of Leonardo da Vinci and Rubens, Caravaggio and Titian, Perugio and Giotto. Only in the Uffizi Gallery you can see the work of Michelangelo - "The Holy Family", as well as the famous works of Raphael, Fabiano, and Botticelli. Such a cluster of the best works of art you will not find anywhere else! 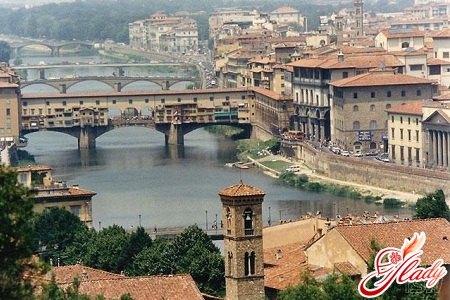 Palazzo Medici Riccardi is a palace builtfamous architect Michelozzo di Bartolomeo in the distant 1444 year. In his model years later, many palaces of Italy were erected, the structures of this form symbolized the early development of the Renaissance. Both the building and the courtyard are a regular tetrahedron, in the depths of the courtyard grow scented lemon trees. The first floor of the palace was conceived as a symbol of the invincibility of the Medici - it was faced with a rough stone. On this floor there were rooms for servants and a kitchen. The two upper floors served for the royal family, their facade looks a bit softer, it is made of smooth slabs. Unfortunately, the palace is not completely open to tourists, at the moment it is occupied by the city government. Another of the magnificent palaces of Florence - Palazzo Pitti, has a long and interesting history. Its owners have changed many times, and the building has been rebuilt several times. There are several museums in the palazzo. Gallery Palatine, which stores the works of Titian and Raphael, Rubens and Velasquez; Gallery of Modern Art - here are paintings of later Italian artists; Museum of Silver, Suit Museum, and Karet Museum - these places will tell you about the life of different eras, show old ornaments, as well as carriages and carriages of the XIX century.

The spiritual world of Florence

The most notable building of the city is theFlorence Cathedral. Its dome towers above the houses and parks - you can not pass by this amazing holy place! In the XIII century, the best masters took part in the erection of the cathedral, and the octagonal dome, pierced by a spire, brought the cathedral world fame. The highest point of the cathedral is at an altitude of more than ninety meters, and the great Michelangelo himself created a car on which a ball topped the dome. The cathedral is huge, its dimensions are amazing! Today it is the fourth largest in the world. In addition to its size, the Duomo Santa Maria del Fiori is famous for works of art stored in it - "Lamentation of Christ" by Michelangelo and "Mary Magdalene" by Donatello. You definitely need to see these Florence attractions, and after viewing climb to the observation deck on the top of the Duomo - from here you have a wonderful view of the whole city! Continuing a walk through the spiritual places of Florence can not be ignored by the Cathedral of the Holy Cross. Like all the sights of the city, a Gothic-style church, it keeps its secrets within itself. Chapels of the temple, decorated with frescoes of Italian masters, attract tourists from all over the world, and not only they - great people rest here: Galileo, Dante, Michelangelo. Machiavelli, and other famous Florentine inhabitants. One of the oldest places in Florence - the Basilica of San Lorenzo, the church was consecrated back in 393. Its current appearance the building of the temple received much later, and acquired some Roman features. The church protects the peace of the great dukes of Tuscany - representatives of the Medici family. The marble tomb is decorated in baroque style, and two sarcophagi are decorated with statues, embodied by the famous Italian sculptor Takka. 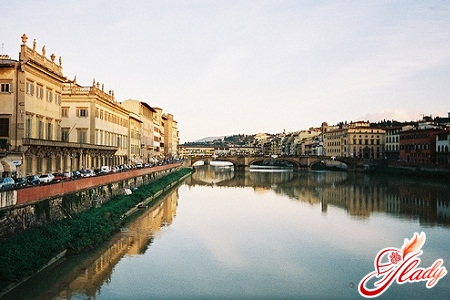 If you travel with children, take them tofabulous world of the country "Fabialandia". Here they can visit the wizard's castle, wander through the mysterious labyrinth, see Lake of Dreams and a gold mine, and a large but good-natured caterpillar will carry them through a fantastic cave of ants to the froggy sea. A lot of positive emotions will be provided to your kids. In addition, you can identify the child for the whole day, and while he is enjoying his fairy tale, you enjoy your own, taking a walk through the most interesting city of Italy.

Walking around the city ...

Be sure to visit the Piazza della Signoria - hereare the most iconic attractions of Florence. Palazzo Vecchio is a palace so similar to the fortress, the Neptune fountain, built in the 16th century, copies of the famous sculptures by Michelangelo and Giambologna, whose priceless originals can be seen in the museums of the city - all of this will be remembered for ever. Walking around Florence is not just an inspection of its sights. Here everyone will find something special for himself. Visiting all its palaces, churches, galleries, you will feel the warmth spreading in your soul, as the realization of beauty penetrates you to the very fingertips, because the people who lived and died in this city left their imprint on all the streets and houses, in all gardens and parks. And if you take a good look, you will see that they are still here, they have left an indelible mark on the whole of Florence. Great people are a great city ... A city that has seen a lot during its entire existence, the birth of a new culture and the change of religions, decay and war, the change of powers, and finally, an incredible rise in popularity that will never fade away. It is impossible to see all the sights of Florence in one day, you need to come here for a long time, and pay special attention to every house, every corner of the city. Only then can you find out what Florence is - Renaissance sights of which will exist forever! We advise you to read:

Sights of Cuba: a trip to a wonderful country

What of the things to take to rest?