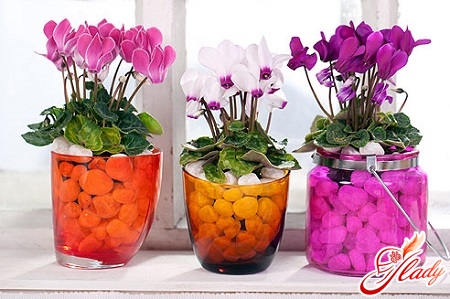 Cyclamen - compact, dark green rooma flower with leaves in the form of hearts and small flowers on low stems resembling a flock of light-winged white-pink or lilac-red carefree butterflies. This house plant has long won an army of fans among the florists. The genus cyclamens has more than 60 species and belongs to the family of primrose. It is a perennial flower with tuberous roots, growing mainly in the countries of Asia Minor, in the central and southern parts of Europe, in the Caucasus and in the Crimea. Sometimes a cyclamen is called a mallard or an alpine violet.

Cultivation of cyclamen as a decorativehouseplant has been going on for a long time. And now you can admire many of its varieties: large, medium and dwarfish. Cyclamen flowers have a pleasant smell, sometimes there is no smell. At home, mostly cultivated Cyclamen Persian and Cyclamen European. The first blooms in the winter, and the second - in the summer. Having at home both kinds, it is possible to enjoy cyclamen almost all year round. For a long flowering period - up to two months, observe the basic requirements for caring for this beautiful plant. 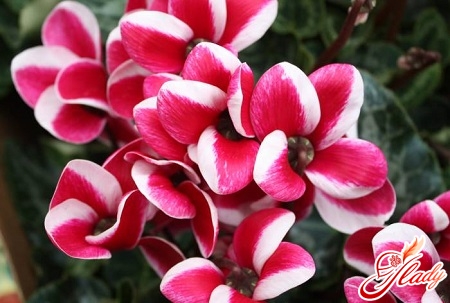 If care of indoor cyclamens in the homeconditions are not provided properly, the flower begins to ache. Lack of moisture or excess of warm dry air, especially in winter, leads to a reduction in the period of flowering cyclamen, yellowing and twisting of leaves. It is necessary to fight these shortcomings correctly: place the flower on constantly wet moss or peat, regularly moisten the air around the plant with a spray gun. Do not overdo it with moisture, since such care for the cyclamen is no less harmful than its absence. If you notice that the flowers of the cyclamen fade, and the leaves are twisted, treat the plant with a soap-tobacco solution - it is possible that it is affected by a shield aphid, a scabbard. Get rid of another pest - tick can only be mechanically, removing the affected flowers and leaves. The most difficult is the transfer of cyclamen to the underground tubers of larvae of the elephant beetle. At a time when his adults gnaw flowers and leaves, the larvae eat roots. Attack on all fronts can only be stopped with the help of complex measures. It is necessary to change the soil and treat the flower and tubers with insecticides.

How to care for Cyclamen

Buying a houseplant,ask the seller how to care for the cyclamen, or read the special literature. Water the cyclamen abundantly, but carefully - the water should not fall on the core of the rhizome, nor on the base of the leaves, only in the ground. Even better, if you just immerse the pot in water or put it on wet moss. Spray the air around the flower, do not forget to add mineral fertilizers from time to time, water with soft standing water - and your cyclamen will long please the eye with a magnificent color. At the beginning of the autumn season cyclamen will need a transplant. Make a mixture at home from equal parts of turf, leafy earth and peat, add half the proportion of sand. Properly clean the roots of the old soil, remove the damaged, rotten or dried up shoots of the rhizome. The depth of planting should not be more than the middle of the tuber. Covered from above with moss, the top will give rise to new young leaves. If transplanting cyclamen is not possible for some reason, try at least to update the top layer of the soil. Transplanted flower leave on the north window sill, before fully fertilizing it with fertilizers. If everything was done correctly, by the end of the autumn cyclamen will blossom. 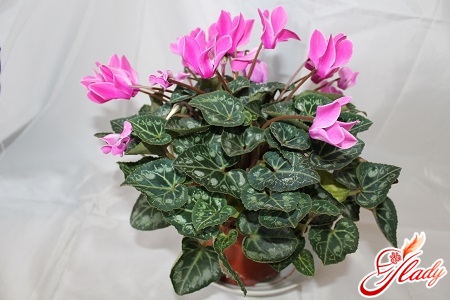 Cyclamen reproduces both tubers andseeds. To obtain seeds, it is necessary to make artificial pollination and wait for the maturation of the capsule with the seeds. But do not miss the moment when the small seeds fall into the soil themselves, and collect them in advance. Thus, the Persian cyclamen breeds most often. Sow the seeds begin around July or August - just after harvest. They are placed in peat pots with well-moistened soil, and create a greenhouse effect - cover with a film. Humidity should be moderate, and the air temperature should be about +17 degrees Celsius. When the first leaves appear on the shoots, the plants are transplanted, completely covering the tubers with soil. After a couple of months, the transplant procedure should be repeated, leaving the top of the tubers above the ground, carefully covered with moss. Such a young cyclamen will not begin to blossom before a year and a half or two years later. Cultivation of cyclamens from seeds requires a lot of patience and serious attitude. To breed cyclamens with tubers is less troublesome. Basically, the daughter tubers of the European cyclamen are used for this. The procedure involves the separation of old tubers into several parts, and their seating on different pots with an earth mixture. The humidity of the soil in the pot should be moderate, do not allow the earth coma to dry out or to over-moisten it. Reproduction of the cyclamen in this way allows you to see flowers much earlier than in the first version. Cultivation of cyclamen is an exciting process, allowing you to surround yourself with spring beauty throughout the year.

Ampelnye plants: for the garden, for the house, for the street

Ficus Benjamin sheds leaves: what to do with such a problem