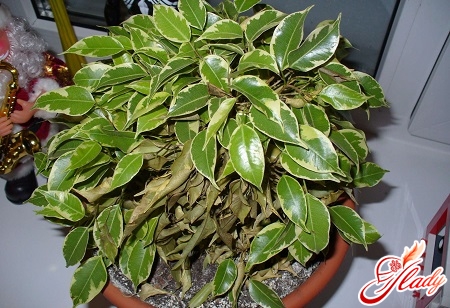 According to the ancient teachings of Feng Shui, ficus isa plant that helps create an atmosphere for energetic and effective work, mindfulness and concentration. In addition, the ficus clears the air, making it more fresh, and allows you to create a cozy atmosphere in the room. Today there are many varieties of figs: figs, figs, fig trees, Melanie ficus and many others that are grown on garden plots and in apartments. However, we will discuss a problem that often hinders the growth of one of the most popular types of house plants - the fig tree of Benjamin, and find out why Benjamin Ficus sheds leaves and how to fight it.

General information about the plant

The birthplace of the ficus of Benjamin - Australia, the Philippines,India and China. Here, on the open ground, the ficuses of this subspecies can reach a height of twenty meters. At home, this plant grows to three meters. Ficus Benjamin - a tree or shrub with a bark of a grayish hue, branches of it - drooping, and the leaves - a little oblong. The color of foliage can be different: variegated, monochromatic, and also fringed. The leaves also differ in their shape. They are straight and wavy, and in some species leaves are naturally twisted. The fruit of the Benjamin ficus is not edible. 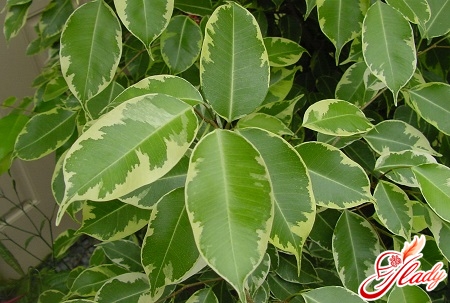 Despite the fact that the ficus can not be called the mostdemanding plant, some problems can still manifest themselves in the process of its growth. And, of course, the first of these is the fall of leaves. Why is this happening? If you observe that the leaves are gradually crushed, begin to turn yellow and fall off, then this indicates a strong lack of nutrients in the soil composition. In this situation, it is recommended to transplant to a better nutrient soil. Sometimes the foliage loses color, small light spots appear on it, and the edges turn yellow. This indicates an abundance in watering. To normalize the condition of the plant, it is important to give the soil time for complete drying. Only after the earth is dry, the plant needs to be watered again. If you do not comply with this rule, the root system may become corrupted. Another problem is shriveled and dried leaves. Such external manifestations indicate the drying of the soil layer and excessively dry air. Perhaps, the ficus suffered from sunburn, which provoked direct sunlight. What to do in this case? Simply pritenite plant or find a more suitable place for it. If the leaves are young, they get the right amount of necessary substances, but they quickly fly around, then the problem can be caused by anything. For example, a lack of light or a sudden change in climatic conditions, it is known that the ficuses of any species react very painfully to any movement. For them, elementary changes of place within the room are undesirable, not to mention the change of cities or countries. What if the ficus loses only the lower leaves? In general, such a phenomenon is rather a norm, and not a problem, in particular, in the case of growing a plant in a room. At the same time, the trunk should not be completely denuded. Falling of the bottom foliage should be uniform. Full denudation of the trunk can trigger untimely transplantation or soil in which there is not enough vitamins. And one more problem - brown spots. As a rule, they appear on the tips of the foliage, after which the leaves fall off. Usually this is due to excessively high temperature and dry air in the room. Also, stains can occur in case of improper feeding - you do not need to abuse fertilizers. 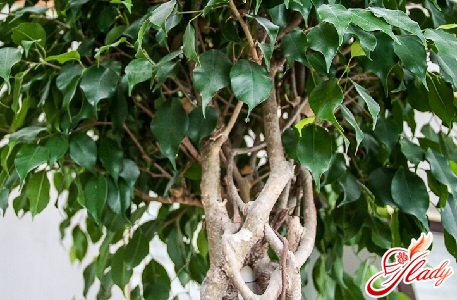 General rules for caring for the ficus of Benjamin

Among all varieties of Ficus Benjaminis distinguished by its heightened sensitivity, it can be called touchy. As soon as you bring the pot with the plant home, choose the optimal place for it. Decide with him once and for all. You do not need to constantly change and rotate it, move it, or, even worse, transport it. Try not to have drafts, dampness, darkness in the location of the tree - the leaves of the ficus can not stand it. To Benjamin Ficus grew quickly and well, provide him with a temperature of twenty-five degrees in the summer. In winter, it must be lowered to sixteen. Remember that the temperature minimum, which can be transferred to this plant, is ten degrees, no less, so try, even in emergency cases, not to violate such boundaries. The room is recommended to be ventilated regularly, however it should be done carefully, so that the ficus does not spill. Importance of moisture is important. To maintain the ficus of Benjamin, you need to provide a figure of 70%, well, or at least at least 50%. In summer and in winter, when the air in the room is strongly overdone, do not forget to spray, and once a month arrange a kind of "shower" for the plant. This should be done so that the plant does not lack water and moisture. Shower done simply. Transfer the ficus to the bathroom, covering the ground with a special film. Now water the plant using warm water. After the washing is complete, leave the ficus in the bathroom to dry it. Remember: if the ficus suddenly subcools, its foliage will fade and fall off. And to avoid the appearance of white salt spots on the leaves, use soft standing water. It is equally important to follow the rules of watering. Use for this purpose, stand-by or boiled water, as mentioned above. It is desirable to boil it, and then cool to room temperature. Many experts advise heating water up to fifty degrees. You can add a little fertilizer to it. To prevent the ficus from discarding the leaves, optimize the watering - no need to draw up a special schedule. Simply periodically feel the soil layer and, when you see that it is dried, boldly watered. It is recommended to pour liquid in two or three ways - it should completely cover the entire top layer. Thirty minutes after watering, the excess liquid drains into the drip tray through the drainage holes - drain this water. Your main task is to prevent drying out or excess moisture in the soil layer. There are also some lighting rules, because the brightness and color of the leaves depend on it. This is especially true of variegated varieties. The place where the ficus is located should be well illuminated, while ensuring that direct rays to the plant do not fall. If we talk about monotonously colored varieties, they are resistant to shading, but the variegated ficus will not bear even a small shadow, because of it, they often discolor and fall leaves. In winter, it is worthwhile to provide the ficus with an additional source of lighting, for which you can use special lamps. Now about transplantation: when is it better to conduct it and how to do it correctly? Ficus should be transplanted every two years, after the plant reaches the age of four. How to understand that it's time to change? The signal will serve as an earth-bound earth braided by roots. It is important to make a transplant correctly. First of all, the plant must be poured and extracted from the pot. That layer of earth, which is located on top, is removed by shaking off the roots, then placed in a larger pot on the drainage layer, sprinkled with earth. After this, you need to fill up the earth with each side. If you can not transplant the ficus because of its size, then just a couple of times a year just change the soil top layer. Answering the question why some of the ficus leaves fall and turn yellow, we can not fail to mention the correct substrate and fertilizer, because of these two factors, very much depends. Acquire a special substrate for the Benjamin ficus. Give preference to the soil of loose structure - this will allow the plant to become more firmly entrenched. After the root system gets stronger, you can transplant the ficus into the soil, more dense in its texture. When choosing a feeding, be guided by the substrate chosen in advance, as well as the age of the ficus. Usually, fertilizer and fertilizer are introduced in the warm spring-summer period. This should be done every few weeks, while alternating organic chemistry with mineral fertilizers and substances. In the cold, winter period, you do not need to fertilize the plant - let the ficus rest from the chemistry. However, if you create the most comfortable conditions for your plant: correct lighting, the desired temperature regime and humidity, then fertilizers can be added to the soil, however, no more than once in two months. In this case, the feeding should have a weak concentration. Yes, sometimes ficus sheds leaves, turns yellow, crumbles - gives its owners an excuse for frustration. Any plant can be compared to a baby, which requires careful care, and ficus is no exception. Providing this tree with the proper conditions for existence, taking care of it and daily grooming, you will grow a delightful oriental plant that will decorate your house and make it even more cozy than before.

How to care for violets in winter?

Climbing plants for the garden

Lawn care in spring, after winter

How to grow pepper seedlings?