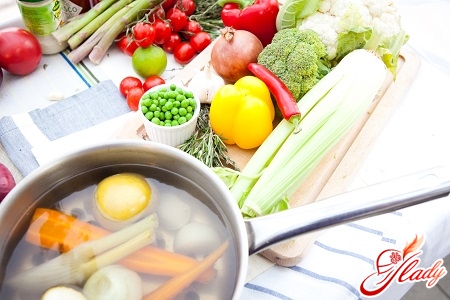 Every time, thinking about what to cookfor lunch, we are sorting out a huge number of recipes for all kinds of dishes. And if you or someone else from your family has problems with digestion, most recipes are either discarded or altered at the discretion of the hostess. The most common dinner dish in our country is soup. We also ate it in kindergartens, it is cooked in an extended group at school, and there is no way to avoid eating at home, in the menu of which one or another type of soup is necessarily in the first place. Among them, we can distinguish such varieties as meat soup, vegetable soup, mushroom, fish, seafood and even fruit. This classification is given in accordance with the main component included in the recipe of the dish. However, it is rather difficult to classify them, since it is very problematic to single out the main component. In order for the soup to be right and tasty, it is necessary to observe the main rules when preparing it, namely, that the liquid in it should not be more than 50% of the total mass of the prepared dish. Although much depends on your requirements, tastes and the possibilities of the stomach. 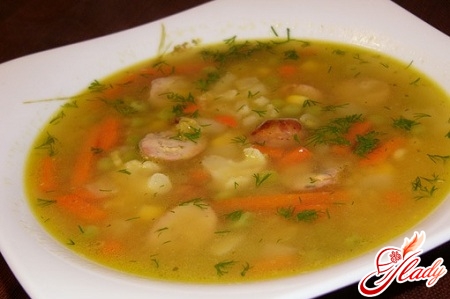 Without vegetable soups, neither in our, nor in anyanother country can not do without, if only because several times a year, Orthodox Christians, fasting, refuse to eat meat. Another factor that influences the spread of vegetable soups in Russia is that there is still a greater degree of agricultural activity among the population. It is because of this that Russian citizens prefer a recipe that requires cooking their own grown foods. Well, the question about vegetarianism also contributes to the development of this category of soups. But, nevertheless, do not forget that vegetable soup can be cooked on meat broth and even with the addition of meat, and the main component of this dish will still be a vegetable, which will need to be cooked in meat broth. Thus, soups, the main element of which are such traditional vegetables for the central part of Russia as potatoes, cabbage, carrots and onions, are an excellent basis for soup with beef or pork. For bean plants a successful combination will be a fat or smoked meat. Well, for soups that contain greens (from sorrel, nettle), you need dietary broths with rabbit meat, poultry. As additional ingredients in the soup recipe includes cereals, pasta, crackers, eggs, dumplings and much more. Cream, all kinds of sauces, cheeses, sour cream, olive oil are used for soup filling. Do not overlook the factor, such as decorating a dish, which is rarely included in the recipe. For this purpose, twigs of greenery, figured tomatoes, lemon slices, halves of olives or chopped nuts and seeds are used. As accompanying products, pies, toasts, toasts are often prepared. So, in the world there are more than 200 varieties of vegetable soups. And this is only officially registered data. If you add to them every recipe that the landlady uses, then a very large list will be obtained. 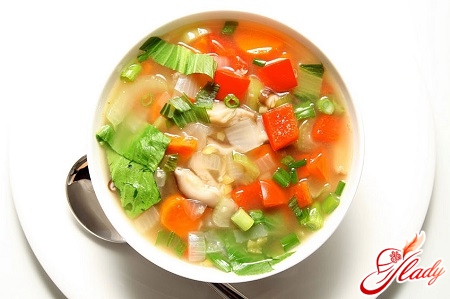 In order to prepare such a soup, it is necessary,first of all, broth. It can be cooked both on the vegetables themselves and on any other products. As for any dish, it is necessary to use only fresh products that must be thoroughly washed and cleaned. Since all vegetables have different composition and, accordingly, react differently to heat treatment, then when cooking them, you need to consider the timing of preparation of each vegetable. Otherwise, it may turn out that potatoes are not cooked, and cabbage, on the contrary, will be digested. Despite the fact that soup can have the same name, it can be brewed in different countries in different ways.

The main varieties of vegetable soups

The main component used incooking of a dish, you can distinguish not only the variety of soups, but also their subspecies. They depend on what kind of flavor characteristics are the determining ones. Borsch - vegetable soup with beetroot flavor Many can resist this definition of borsch, however borsch is a category of vegetable soups. After all, the main, determining the taste here is a vegetable, like beets. History of origin and etymology of borscht Several factors influenced the name of this dish. The most basic is what it consists of. According to some sources, in the old days the main component of this dish was cow-bream. At the same time, it is not necessary to confuse the cow-bearer with the hogweed Sosnovsky, from which burns appear. This cowworm, whose leaves were used for food, was added to soups, which were called borsch. According to other data, the word "beaver" was formerly called beets, but in no etymological dictionary there is no data about it. But in some Slavic dialects are the common names of beets - Buryak. About the origin of borscht no data is available. But according to some sources, this dish appeared on the territory of Kievan Rus. That is why in the given region it has received the greatest distribution and a variety. In Russian documents, borsch has been mentioned since the 16th century, and according to some sources it was borscht which was the most favorite dish of Catherine II, Alexander II. Technology of borscht cooking This soup is a rather complex multicomponent dish. When preparing it, you should be very attentive to all its stages. Correctly cooked vegetable soup - very tasty, beautiful and satisfying. The main component of this soup is beet. It is she who is able to give the dish a special color, taste and aroma. With beet, in general, and associated difficulties in the preparation of borscht. Before you put the beet in the soup, it must be properly cooked. To begin with, it should be washed and cut into small pieces (some rub it on a large grater). The shredded vegetable is stewed in a frying pan, with the addition of oil, you should add acid to it (it can be vinegar or citric acid, lemon juice), which will prevent beet discoloration during cooking. Separately fry all other vegetables - onions, carrots, greens. Almost at the very end, tomato paste or fresh tomatoes, cut into small slices, are added to them, which should be cooked for no longer than 5 minutes. This is a kind of dressing soup. It remains an open question about what kind of broth to use for such a "beautiful" dish. First and foremost nutritionists and culinary experts advise to focus on their own taste. So, you can use as a vegetable broth, in which, before frying, you need to boil carrots, onions and other vegetables. In this case, it is necessary to observe the basic rule - in order to make the soup the most rich, you need as much vegetables as no plant can compare to the satiety effect with meat. In different regions, meanwhile, not only ordinary water is used as a broth, but also kvass with the addition of meat. And even sour-milk products can be added to vegetable soup. 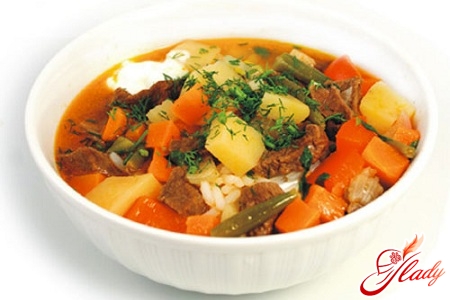 Rassolnik as the main dish of Russian cuisinenor strange, but the recipe for pickle is unique. This consists, first of all, in the simplicity of its preparation, in the absence of the need to attract a large number of ingredients, and also that it has several varieties depending on the "target" audience of the dish. The main element of the rassolnik in any of its forms is still the salted cucumber. And, depending on the additional products, the rassolnik can be traditional and vegetarian. The first option involves a rassolnik with meat, which is usually used as the so-called "offal", for example, pork, beef or chicken liver. Add to it you can and meat, and many other vegetables, and cereals, and seasonings, and even greens. While the recipe for pickle includes salted cucumbers, it should not be too sharp and too salty. So, during the preparation of soup, it is better not to add salt at all, and already during the meal, each to his own taste will salt him or add some more spices. Recipe and technology of pickling cooking Cooking such a vegetable soup, as rassolnik, is not very difficult. To get a delicious lunch, the following ingredients should be added to its composition:

In order to cook this vegetable soup,you must first get busy with the preparation of broth. To do this, boil 2-2.5 liters of water in a saucepan, peel the pickled cucumbers from the skin and drop it into boiling water. This will be the basis for the rassolnik broth. After you wash all the vegetables and greens, you need to cut them and cook. The first thing we do is to take greens and onions. We shred them with straws and fry them in oil. So, we have on the stove is a large pan and frying pan. We need another small saucepan (or bucket). We pour out half a glass of broth and put salted cucumber in it. Frozen water is reduced to a minimum and, closing the pan with a lid, leave it to languish until the cucumbers are softened. At the same time, while broth is being boiled, cucumbers are fried and onions are fried, we cut potatoes with small cubes, shred cabbage. Passivated vegetables can be turned off immediately, once they have a pleasant golden color. First, the potato is added to the broth, a little later than the cabbage. Cook them for about 15-20 minutes, attach to them fried vegetables and flavored cucumbers. Approximately 5 minutes before the end of cooking, we add salt, pepper and any other spices to the soup. 1 minute before the end of cooking in the pickle you need to pour the cucumber brine. So, the delicious soup is ready. In addition to this recipe, there are other varieties of it. For example, you can prepare rassolnik with mushrooms, with millet, oatmeal or other cereals. This option is traditional, vegetarian. Another way to prepare rassolnik is a recipe with the content of meat in it. So, for example, the recipe of the Leningrad rassolnik is based on a meat broth. In this case, the meat that we will cook should be boneless. We remove it after it is welded. In advance it is necessary to boil the rump, it will take about half an hour. All vegetables are used and prepared in the same way as in the traditional version, but in the beginning, croup is laid in the broth, and half an hour later you can start vegetables (in the same order - potatoes, cabbage, fried onions and greens). This delicious rassolnik is served with meat, which can be put directly into a bowl of soup, or it can be placed on a dish from which it will be easy for everyone to get it and add it to the soup.

Soup for every day: cooking recipes

How to cook lagman