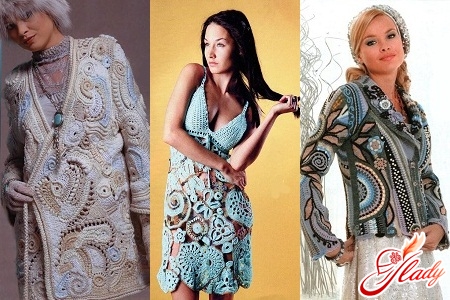 The truth of that all ingenious is simple, yettime has found its confirmation in the work of the Australian designer, artist and needlewoman Prudence Mapstone. She took Prudence and invented a new knitting technique - freform. Frimorm is a new word in needlework. This is not just designer delights, it is absolute freedom, the absence of any rules and restrictions, as well as unpredictability and exclusivity. The technique of freforms is one of the most unusual types of knitting, based on the principles of irregular knitting and the technology of making Irish lace. From English "Freeform" is translated as a free form. Cloth associated in this technique is more like painting than handmade knitwear. Thanks to the uniqueness and uniqueness of the freeforms literally conquered the needlewomen of the whole world. And thanks to the Internet, its popularity is getting higher every day. What is the secret of such popularity?

Despite the absence of rules, the freedom to choose materials and methods of knitting the technique of freeforms still has some distinctive features.

Taking into account the peculiarities of the canvas made intechnique of freeforms, it is mainly used for making bags, ornaments, coats, cardigans, waistcoats and other products made of heavy and heavy knitwear.

Frieform - knitting technique by the principle of mosaic. A whole picture is collected from the fragmented fragments. Therefore, you need to start knitting with one of the small elements. First, a circle, a flower, a shell or some spiral is loosened. Then other elements or a small cloth (smooth, openwork, relief) are added to it. These elements must be distinguished by both color and texture. For contrasting elements, the suturing of the "stepping step" is used. This creates a separate scramble. Finished scramblers are laid out in a pattern, fastened with pins and connected with each other using a hook or sewn with a needle (from the inside). If the result is a void between the scramblers, they are closed with additional small motives. When decoupling scramblers, it is important to make sure that they are flat and even on the underside. That is, the canvas should not shrink and bubble. 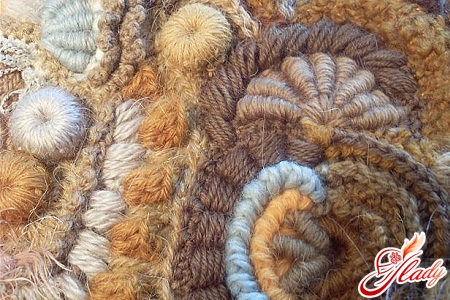 For giving the canvas a relief and textureThe most commonly used twisted or postal column. This is the main element of the freeform. Such bars are crocheted in various ways. They have either a ribbon or a circle. To unfasten the pillars on the hook make from 5 to 10 turns, and then through them and through the loop from the chain stretch the working thread. In addition to twisted columns, there are other basic elements of the freeform. These are crocheted elements:

The technique of knitting freforms also impliespresence of the elements connected by spokes. This is, as a rule, more even and flat fragments of scramblers. They seem to counterbalance the excessive convexity of the canvas. But even whole scramblers can be connected solely to knitting needles. Such elements give an opportunity to see the texture of the yarn. Knitting patterns for crochet elements can easily be found in any special literature and on the Internet. For spokes scrapers, you can use any traditional patterns and patterns from multi-colored yarn. In a word, everything that your imagination is capable of. The technique of knitting freforms gives such freedom of creativity, as no other kind of knitting. Perhaps that is why freforms are winning more and more fans around the world. Each model, performed in this technique, is obtained not just beautiful, but exclusively designer. Freform is not only a special technique, it is also an art close to painting, where there are laws of harmony, but there are no restrictions. And any rules act only as an instrument for the embodiment of the author's vision of the world. We advise you to read:

How to change a man's shirt into a woman's shirt? Redoing the shirt

Candles with their own hands - unusual beauty

Stands for flowers with their own hands

Wedding Accessories for Yourself