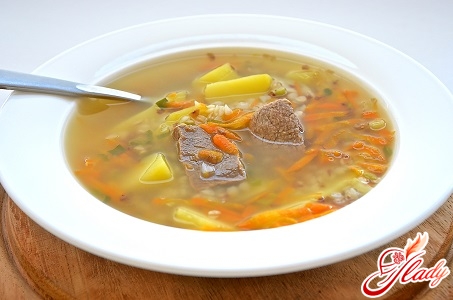 Soups in Russia are a special dish thatis on the table almost every day. Each recipes are unique and reflect the characteristics of a particular people. This is in many ways and served to the fact that by today there are more than one dozen different soups. Among them, and sweet, and fruit, and mushroom, and fish, and meat soups (from beef, from pork, from chicken). You can prepare them not only for every day, but also for some special occasion. At different times, new recipes appeared in this or that country, corresponding to climatic features, the location of the state, its flora and fauna. So, somewhere there was a fruit soup, somewhere a mutton soup, in some countries soups turned out to be easy, in others - too sharp. All this is a reflection not only of geographically justified factors, but also of the internal worldview of the inhabitants of a given territory.

Such meat as beef is not veryfat, so you can use it almost everyone. Except for people suffering from severe stomach disorders. But with all this, beef meat is very nutritious and tasty. It is suitable for a large number of dishes. From it you can cook soup, chops, cutlets, shish kebab; it can be prepared as an independent dish. But the most useful is soup. He is the record holder for the content of nutrients and vitamins. To cook soup of beef, a few bones with meat or a bit of finely chopped beef fillets are enough. As an additional product to it, almost all products that you have in the refrigerator or in the closet are suitable. These include vermicelli, tomatoes, cereals, etc. As it became clear, soup of beef can be of two kinds: on a broth from a pulp and on a broth from meat on a bone. The second option will give your dish a special flavor and will make the broth more plentiful. The most famous soup of beef is the Georgian national dish - harcho, but there are many recipes not only tasty, but also useful soups. 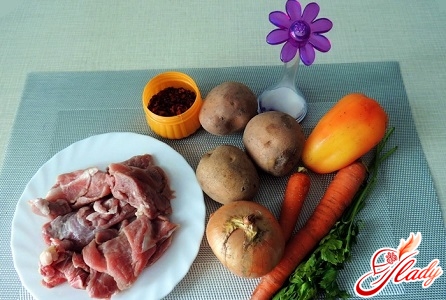 In order to make soup a favorite dish of all yourhouseholds and guests, the choice of products for it should be taken most responsibly. So, when choosing meat, try to make its color red, that is, the color scheme should not leave the gap in which all the shades of red are concentrated: from bright to dark. Admitted fatty veins in the pulp, the color of which should be pink, and the fat itself should not be wet or wet. Beef shank, brisket and brisket are great for soup harcho. So, for the preparation of Georgian soup harcho in its recipe includes the following ingredients:

First we start to cook meat and at the same timebouillon. To do this, beef should be properly cleaned of possible films, from bones (if any), rinsed several times and cut into small cubes. Sliced ​​meat once again thoroughly washed, piled in a large pot and filled with water. At this amount of meat, approximately 9-10 glasses of cold water will be needed. We light a strong fire and put the pan with meat and water on the gas stove. From time to time it is necessary to check how the meat is cooked, and to remove the formed foam. This must be done before boiling, otherwise all the foam (and this remains on the meat dirt, released under the influence of heat treatment) will remain in the broth. Meat cook until semi-ready, which will take about half an hour or a little longer. By the time the meat is ready, it is necessary to cook onions. We clean the bulbs from the peel, mine and cut into small cubes. We lower all the onions in a saucepan with boiling broth and cook for 10 minutes. We wash rice and send it to the soup. The resulting mixture is cooked for another 20 minutes and add to the soup half the greens, salt, pepper and any other seasoning (better adzhika). We reduce the fire to an average, and on the next burner we heat the frying pan. Pour it into the vegetable oil, warm it properly and dissolve the tomato paste in it. Ready to refuel add to the soup. Fire is reduced to a minimum, top in the soup minced spices, the remaining greens and finely chopped garlic. When serving soup we pour into separate plates, decorate with finely chopped parsley and dill. This recipe is one of the simplest and allows you to cook a delicious lunch in a short period of time. On the basis of this recipe, you can prepare other varieties of soup kharcho. For example, if you have time, you can make soup kharcho with walnuts, chilli and cilantro seeds. All this is pounded in one mortar and added to the soup after two hours of cooking. In this dish you can still add finely chopped tomatoes and sour lavash. 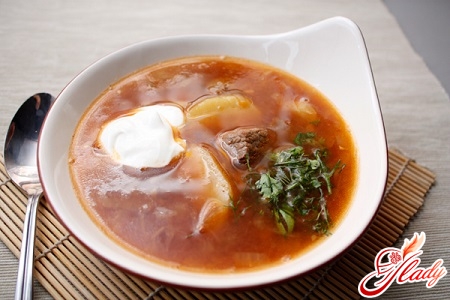 The recipe for this healthy meal requires the following ingredients:

First you need to dip the tomatoes into boiling water andremove their skin. Peeled tomatoes cut into small cubes and send them to a skillet. We clean the onion and cut it too finely. Tomatoes together with onions are put out in oil. As with the preparation of other beef soups, the broth is cooked with water and boiled meat. After it is cooked half cooked, we send the overcooked tomatoes with onions to the broth and reduce the gas to medium. Meat must be removed from the pan and cut into small pieces. After that, send it back to the broth and cook everything for 5 minutes. Eggs beat up and, stirring quickly, add to the soup so that the egg mass is dissolved and thickened in the soup. Once this happens, add the soy sauce and salt to the broth. Serve the soup hot, you can decorate it with herbs. 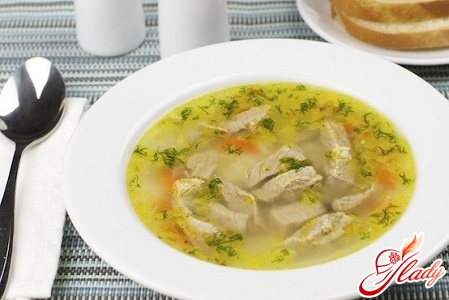 Recipe of mushroom soup with noodles and beef

So, beef can be either basic oran additional element in the preparation of soup. So, if you add it to the mushroom soup, you will get a new original dish, the recipe of which you can share with friends. It is necessary for him:

First you need to wash and boil the beef. In this case it is necessary to prepare it to the full readiness. Once it is cooked, remove it from the broth and cut into pieces, corresponding to portions. Broth filter and pour into a separate pan. Mushrooms are mine, cut and cook in clean, unsalted water. While the mushrooms are cooked, we cook homemade noodles. To do this, you need 1 egg and 70 grams of flour (for the number of products that are indicated in the recipe). The dough is kneaded very thick, then roll it into a thin layer and let it dry a little. After that, cut it into thin long strips and cook in salted water. At this time cut the onion, mine and we clean carrots, which either finely cut, or three on a large grater. Fry these vegetables in butter (cream or vegetable). All this together with the boiled mushrooms, cook in a meat broth for 15-20 minutes. Then add boiled kvass, home-made noodles and greens to it. All together brewed no more than 5 minutes. Ready dish we pour on plates, we add in each slices of meat, we fill with sour cream. For canned soup and canned mushrooms. In this case, they will not need to be cooked.

Thus, beef soups areuniversal. On their basis, you can prepare and familiar to all meat soup with vegetables, beef can also become an excellent addition to the mushroom soup. The recipe for this soup is known to everyone, but it can be varied with nuts, fresh spices and seasonings. In addition to all this, beef pulp can easily supplement any soup-mashed potatoes. To do this, you only need to boil the meat, cut it into small pieces. Soup-mashed potatoes can be made from potatoes and onions. It is enough 4-5 large potatoes and 2 onions. All this is boiled and crushed in a blender. Then to the puree we add broth, hot milk or cream. When serving in each plate, put a few pieces of beef. This will help make your soup not only tender and delicious, but also contribute to bringing in your menu of some variety.