Such a dazzling success the world has not yet seen: orphan Phalaenopsis (phalaenopsis) in just a few years skyrocketed in the hit parade of the most beloved indoor plants. Orchid room has become a desired potted flower in any house, because the variety of fantastic colors, long flowering, unpretentiousness in content raise this exotic rating among plants to unattainable heights. Breeders do not cease to amaze us with new varieties with unique colors and forms of flowers. The palette of the orchid of the room is very extensive: from the snow-white color it gradually turns into lemon yellow, amber-orange and, passing through terracotta and pink, changes its color to violet of all shades. But it is not so much the color of the plant that surprises itself, as much the lace pattern on the petals. Filigree strips create the effect of thin veins, and the flowers in speckles or with unusual dark colors look mysterious and surprisingly spectacular. Phalaenopsis is not in vain got the name of butterfly orchids. Their outlines of a variety of shapes, colors and sizes, they are like tropical moths. For a room decor, miniatures are also great. Occupying not much space, mini orchids are in no way inferior in terms of the duration of flowering and ease of care for medium-sized species.

In the home,"Butterfly orchid" is not difficult. This tropical guest is not so whimsical, and the room temperature of 20 degrees is quite suitable. The only thing that is vitally important for her is a suitable primer and good lighting. Vases with orchids are placed in a well-lit place, protected from direct sunlight. With proper care and watering regime phalaenopsis will please you with its beauty for many years. It is best to water these plants, thoroughly moistening the soil with water at room temperature once a week. In practice, this can be done by immersing a pot of plant with a pot of water. In indoor orchids roots are very sensitive, they easily rot, so the soil can not be waterlogged. Before you put the pot with the plant in its original place, you must drain excess water. To fertilize these flowers, root dressings are used, wetting the soil with a solution of the appropriate preparations. Fertilizers are added to the water to moisten the substrate every second or third watering. For fertilizing, you can use complex fertilizers, and designed specifically for orchids and epiphytes. If the air in the room is dry, it will be good for your pet to arrange a morning shower - sprinkle the plant from the sprayer. After the indoor orchid fades, she needs pruning. However, you do not need to cut all the stems to the root. They must be shortened over the second or third sleeping bud. This is a small thickening on the stem. Often new buds develop from such kidneys. Until the day when the kidneys are opened and phalaenopsis blossoms again, it can take up to three months. In the case if the flower stem withers and browns, it should be removed. Soil for indoor orchids should be breathable and hygroscopic. Usually, the soil mixture is made up of pieces of bark, claydite, charcoal and sphagnum moss alternating with the ground. By the way, the moss laid out on the ground, firstly, slows the drying out of the plant and, moreover, looks very decorative. Orchid - houseplant, but in summer it can be kept on a shady balcony. It is very important for her to choose the right flowerpot, because the orchid phalaenopsis has green roots that participate in the process of photosynthesis. To ensure this process, the flower is planted in a transparent pot - glass or plastic. This will not only have a favorable effect on the plant itself, but will also provide an opportunity to monitor the condition of the root system. Pots should have large drainage holes. Phalaenopsis refers to epiphytic plants, which do not require soil. Therefore, for their cultivation, epiphytic baskets can also be used - assembled from wooden or plastic sticks, planks or bamboo vases, where there is no soil. In such baskets the roots develop freely, beautifully braiding the walls of the basket from the inside and out. In addition, phalaenopsis can be planted on blocks filled with a substrate, "upside down". Naturally, phalaenopsises are valued forlong and spectacular flowering. The flowers of these orchids are dense, they can please you with their flowering for a month, or even two. Peduncles also live much longer. Phalaenopsis with large flowers can be observed blooming at various times of the year, because their peduncles develop gradually. They branch, and the bloom is repeated again and again on the same peduncle. An adult plant, well-groomed and strong, can produce up to three peduncles a year. Following each new leaf that appears, the next flower-bud can develop. But do not think that homemade orchids are so unpretentious that they bloom all year round. Large-flowered phalaenopsis give new peduncles seasonally. But their flowering can be controlled by changing the ambient temperature. In order for flower buds to grow, daytime temperatures for one to three weeks should not exceed 18 ° C, and night temperatures should be 12 ° C. This is easily explained by the tropical origin of plants, where the monsoon climate creates exactly such conditions. In our climate at home, large-flowered phalaenopsis and their hybrids begin to form peduncles from autumn and continue this process throughout the winter, pleasing us with flowering almost to summer. The plant is older and stronger, the more it gives flowers. These new peduncles they have longer, and accordingly, and they carry more flowers. Species from warm and humid tropical forests - "summer" phalaenopsis - behave somewhat differently. They constantly need warmer temperatures. Such plants feel great when the temperature is at least 18 ° C and above 26 ° C in the daytime. If the conditions of phalaenopsis meet all the requirements, then they develop their peduncles regardless of the season. There are species and varieties with growing peduncles. And, the more mature the plant, the more it produces flowers at the same time. If you do not cut off such peduncles in Phalaenopsis, after flowering, they will develop again and then bloom again and again. Often they are formed by air "babes".

At home, butterfly orchids propagate vegetatively. This can be done in various ways.

For phalaenopsis, the temperature regime is very important. It affects the formation of not only flowers, but also airborne children. If you raise the temperature and humidity, providing shady conditions, this will contribute to the fact that the flowers will begin to develop not flowers, and daughter plants. This fact is a characteristic feature of all phalaenopsis, but is especially evident in some species, such as Phalaenopsis Shilleriana. If these plants do not plant children, then from time to time they grow very spectacular specimens with cascades of flowering branches. 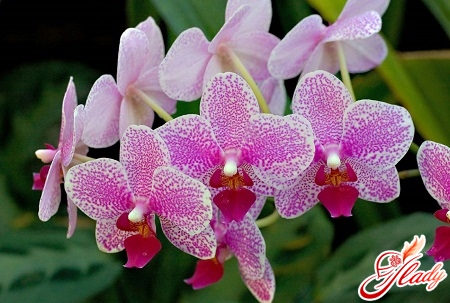 Immediately it is necessary to say about mythical hybrids"Mix". Many inexperienced growers accept for a special hybrid trade mark "mix" in lots of flower online stores. In fact, plants, in the names of which the "mix" is indicated, do not assume the possibility of their choice by variety or color. Of course, the sellers promise that they will try to take into account your wishes, but this does not mean that in the order you will receive the same thing that was seen in the picture. So Phalaenopsis mix is ​​not a cultivar, not a hybrid, and not even a mixed set of orchids, but just a trade mark. Varieties of Phalaenopsis can be hybrid or species. In household collections, there are often such species as Phalaenopsis amabilis, Phalaenopsis Stuartiana and phalaenopsis Schilleriana. These are medium-sized species. But there are species of orchids from the category of "mini", for example, Phalaenopsis rosea (Phalaenopsis rosea), as well as very large - Phalaenopsis giant (Phalenopsis gigantean). In addition to species phalaenopsis, there are hybrid varieties obtained as a result of intergeneric and interspecific breeding. Among them, first of all, standard hybrids are distinguished. Previously, phalenopsis with high stems and large pure white or pink flowers were more appreciated. To create such hybrids used natural species with large flowers. That's how the traditional stereotype arose that phalaenopsis is a flower of porcelain-white, delicate pink or light purple color with wide petals of regular rounded shape. Over time, varieties with very large flowers, reaching fourteen centimeters in diameter, were bred. Although they made a great impression, they lost their grace and charm inherent in this orchid. Gradually, brightly colored and variegated natural species were involved in the hybridization. Thanks to this, hybrids of phalaenopsis acquired more and more diverse colors, ranging from bright crimson-red and purple to complex shades of beige, peach, golden and yellow-green color. At one time, phalaenopsis with a striped and mottled pattern on petals became popular. In the seventies of last year, the French experimented with the Phalaenopsis Stuartianum (Phalaenopsis Stuartianum) and received flowers of a new color, which they later began to call "French crab". Light white and pink flowers of such hybrids are dotted with small specks of a darker color, which gives them a very elegant appearance. On some phalaenopsis, the pattern of veins resembles the membrane of the wings of dragonflies or butterflies. Especially beautiful are those flowers on which veins have a contrasting color. Long flower stalks of these varieties are tied to sticks to make them look more elegant. Then they bend, like a swan neck or resemble a bend of the heart halves. If you tie a pair of these peduncles symmetrically, then a beautiful blooming heart is formed. Some time later, new trends appeared in the selection of these hybrids. Phalaenopsis is becoming more and more popular as potted plants, and their general appearance is beginning to attach great importance. They become compact, neat, the beauty of the leafy rosette, the peduncles, the variety of the coloring of flowers is given great attention. Appear mini and micro-phalaenopsis, hybrids of multiflora. Among the charming hybrids, it is especially worth noting Phalaenopsis Mini Marc "Maria Teresa" (Phalaenopsis Mini Mark "Maria Teresa"). Here is a short list of the most popular varieties of this houseplant:

Today, the fashion trendsetter among phalaenopsisbecame Taiwan, where these plants are grown on an industrial scale. Taiwanese varieties with relief mottled or pure petals produced a real revolution in the selection of phalaenopsis. Among the hybrids of Taiwan, Novelli-phalaenopsis are distinguished - clones of hybrids selected according to a number of characteristics. Thanks to the enthusiasm of breeders, the number of species of these indoor plants is constantly growing, and how many of them will appear in the near future can only be assumed. And today we are presented with unlimited possibilities for decorating our own house with the help of magnificent orchids. You can choose and standard medium-sized species, and mini orchids, and large-flowered specimens. After all, an orchid is not only a house plant of an elite class. This is a real living miracle! We advise you to read:

Diseases of indoor roses and care for them

Mulching and types of mulch