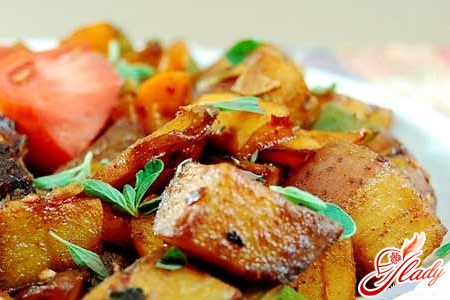 Potatoes for the inhabitants of Russia - the second bread. No family can do without this wonderful vegetable. An uncountable number of dishes can be made from potatoes, and they will all be delicious and mouth-watering. We gladly add it to soups, we cook mashed potatoes, cutlets, casseroles, vareniki, bake croissants, pies. Yes, it is impossible to enumerate everything! But the most favorite was, is and probably will remain fried potatoes. His armor and crispy crust can not leave anyone indifferent. But it's not all that it's so appetizing. In addition, there are a lot of recipes for this simple, but very tasty and hearty dish. Therefore, consider the question of how to fry potatoes correctly, so that it is ruddy, but at the same time retained all the nutrients.

Before frying, potato tubers are necessarythoroughly wash and peel. If the potatoes are young, then it is better to rinse well and use a knife to scrape off the thin upper film that touched the ground. You can cut potatoes in different ways: brusochkami, large straws or discs. Their size depends on how to cook a potato is intended by a person who wants to cook it. It should be noted that the larger the cut, the longer it is fried. And if, in addition, it will be quite a lot, then the potato can turn out without an appetizing crust, soft and crumbly. Frying pan for this business is better to take heavy: cast iron or with a thick bottom.

On what oil to fry?

An important factor is the oil on whichpotatoes are fried. For this purpose, vegetable oil, and sometimes margarine, is often used. But most deliciously this dish is obtained when a mixture of butter and vegetable oil is used for its preparation. Special gourmets take mustard instead of vegetable oil, because they are sure that only it can give the dish a stronger flavor, taste and color. Some fans of fried potatoes love to cook it on lard. To potatoes have a piquant taste, you can flavor the oil on which it will be roasted. For this, during its warm-up, a little nutmeg, or cayenne pepper, or a few slices of the usual crushed garlic, are added to it, which after roasting must be removed.

Now consider the main question: How correctly to fry potatoes? Before proceeding to this action, it is desirable to cut potatoes cut into potatoes and wash them in water, freeing them of excess starch. After this, drain the water, and dry the potatoes with a paper towel, removing all the moisture. Next, a dried potato is laid out in a frying pan with well-heated oil. It is necessary to start frying it on high fire, occasionally turning it over so it does not burn. When the lobules acquire a beautiful ruddy color and are covered with crispy crust, the fire can be reduced, and the frying pan can be covered with a lid. This is to ensure that the potatoes are not dried and not fried. Do not forget to mix it occasionally. The lid for the frying pan in which the potatoes are fried must be dome-shaped. Under it there will be enough space for water vapor circulation, which contributes to uniform frying of the product. Whereas, using a flat lid can cause the potatoes to get too wet and not crunchy. It is recommended to salt fried potatoes at the end of cooking, for about five minutes before turning off the fire. This is done to taste, followed by a one-time stirring. The duration of frying is determined individually, since it depends on the amount of potatoes and the size of its cutting. To do this, take a frying pan and try it. If the degree of roasting suits, then the potato is ready for consumption. 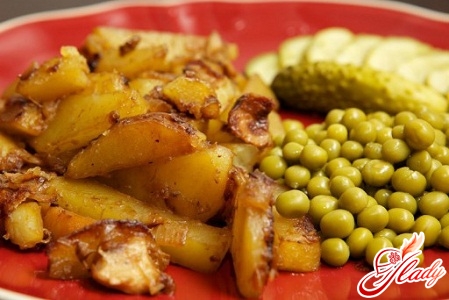 Fried potatoes with onion or bacon

Cooking potatoes can be with different fillers,for example, with onions. For this, potatoes are fried according to the classic recipe. When it is almost ready, it is moved closer to the edges of the pan, releasing a small space in the center, where the finely chopped onions are placed and fried. After that, the onions are mixed with potatoes and all are poured. Fried potatoes are a wonderful side dish, but at the same time, it can become an independent dish. To this end, many are interested in how to fry fat and potatoes, so that it is delicious and satisfying. We recommend to prepare it according to the following recipe: Ingredients:

Preparation: Take bacon. Remove the skin from it so that it does not spoil the taste of the dish afterwards, becoming stiff. Cut it into blocks with a thickness of 2 centimeters. Wash potatoes and clean. Fold it in a container, pour cold water, so it does not darken. Dry the frying pan on a large fire, and put in it slices of fat, so that it melted. Cut the potatoes into small pieces, rinse and dry with a napkin. When part of the fat is drowned, put the prepared potatoes there. Do not cover the frying pan with a lid, but give the potatoes a good frying and a crisp crust. After 20 minutes, gently stir it, reduce the heat to medium. After 5 minutes, put finely chopped onions. Then cover the frying pan and fry until ready, occasionally stirring.

How to fry potatoes with mushrooms? This is now and will be discussed. Ingredients:

Preparation: Wash potatoes, peel, cut into small pieces. Chop the mushrooms. Onion finely chopped. On vegetable oil, fry for 8 minutes, add onion and potatoes, salt. Fry for 25-20 minutes until cooked, stirring. Do not fry the frying pan. Note: any mushrooms are used to prepare this recipe. Those who do not like onions can do without it. By preparing potatoes according to these recipes, you will once again make sure that there is nothing easier and tastier than fried potatoes. Therefore, no modern kitchen can do without this vegetable, which is unpretentious in cultivation, well kept and gives people a lot of delicious joy! We advise you to read: