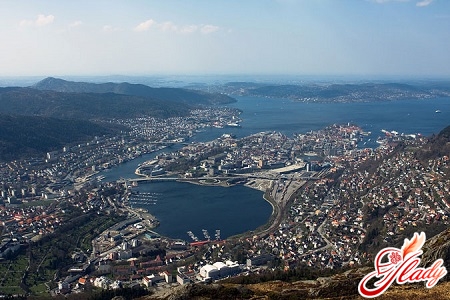 The Kingdom of Norway is located in the NorthEurope and forms the western part of the Scandinavian Peninsula. Its shoreline is completely cut by fjords - deep valleys that appeared on the site of glaciers, which were flooded with water. The longest of them - the Sognefjord - stretched for 203 kilometers into the interior of the continent; Geirangerfjord and Nerejfjord are included in the UNESCO World Heritage List. The coasts of Norway are washed by the Arctic Ocean and the Barents Sea.

Almost untouched wildlife and amazingthe cultural heritage of Norway attracts hundreds of thousands of tourists annually. The cold climate contributes to the active development of winter sports. Hiking and skiing are a great way to spend an unforgettable time in the edge of the Vikings. Historical and cultural attractions of Norway deserve special attention. National museums collect samples of art and crafts that introduce us to the distinctive culture of the northern people. The Akershus fortress in Oslo, the museum of the city of Alta, the National Gallery, the Nidaros Cathedral, the Bryggen shipyard in Bergen are sights that you just need to see after visiting Norway. 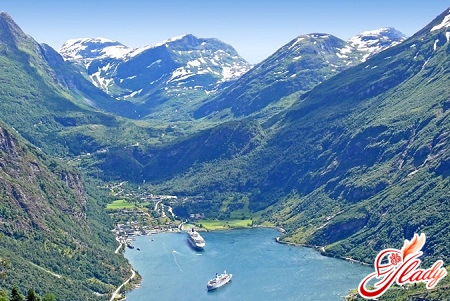 Castle in the center of Oslo

Perhaps the most famousThe sight of the city of Oslo is the fortress of Akershus - one of the national symbols of Norway. It was built more than seven centuries ago. The construction of the fortress began at the end of the 13th century to protect the capital from the invasion of the invaders. In the first half of the XVII century it was reconstructed into a castle, giving the architecture the characteristic features of the Renaissance. For most of its history the fortress of Akershus (or part of it) was used as a prison. During the Second World War, there was a German prison camp here. Currently, the fortress is still a military territory. In the eastern part of the building today is the Ministry of Defense of Norway. Nevertheless, the door for visitors is open daily until 21.00. you can visit the Norwegian Armed Forces Museum and the Norwegian Resistance Museum, which are located within the fortress. Also, one should look into the Royal Mausoleum, where the remains of many generations of the royal family are located. Overlooking the bay and a few steps from first-class hotels, the Akershus Fortress is an excellent starting point for your exploration of Norway's sights. 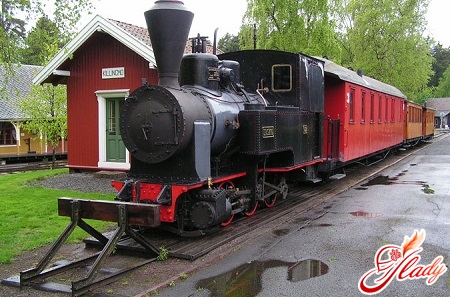 True connoisseurs of art who arrived inNorway, will undoubtedly first of all go to the National Gallery in Oslo. The history of the museum dates back to 1836. Almost two centuries the gallery has the widest collection of works by leading Norwegian artists and sculptors, which today is the national treasure of Norway. In 2003, the National Gallery in Oslo merged with two other museums, changing its name to the National Gallery of Art, Architecture and Design. However, many still prefer to use the old name, because the world's fame brought to the museum is priceless examples of fine art. The collection contains masterpieces not only of Norwegian, but also of French, Swedish and Danish artists. In the gallery you can find works by representatives of early French modernism Henri Matisse and Paul Sezan, as well as post-impressionist Vincent van Gogh. However, the most valuable attraction of the National Gallery are four versions of the world-famous painting "Scream" by the Norwegian artist Edvard Munch. Written in 1893, it was stolen in 1994, but eventually returned to the museum.

Located in the north of Norway nearPolar Circle rock paintings of the city of Alta are the most important proof of the existence of human activity within the Far North between 4200 and 500 years before our era. They illustrate in detail the life of a man of prehistoric times. The images were carved on the rocks along the fjord during the retreat of glaciers, so the figures found above are older than those that are closer to the current sea level. The difference in height is about 25 meters. For the first time the rock art of the city of Alta was discovered and studied by researchers in 1967, and in 1985 the drawings were added to the World Heritage List. In 1991 a museum was opened here, which in 1993 was awarded the title of the Best Museum of Europe. The scientists retouched the drawings with bright red paint, but otherwise the Alta landmark remained untouched. The group of petroglyphs (rock art) consists of more than 5000 drawings and carved figures of people and animals in stone. Most of them (about 3000 images) are concentrated in the open-air museum of Alta, which also includes an exhibition space with beautiful exhibits from the prehistoric era of the region. 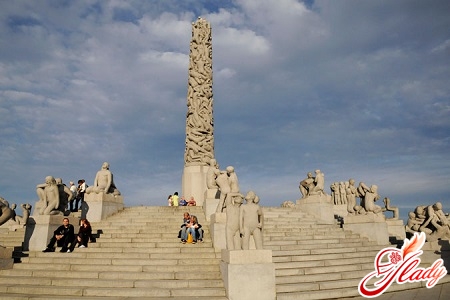 Nidaros Cathedral - an amazing combinationmedieval architectural styles. Initially, there was only a small basilica, but in the first half of the 12th century it was expanded to grandiose proportions. Today the cathedral is the largest medieval structure of Scandinavia. The nave and the choir are made in the style of early Gothic (XIII century) and very much resemble the modern cathedrals of England, in particular Westminster Abbey and the Lincoln Cathedral of the Virgin Mary. The western facade is decorated with a delightful sculptural ensemble, two towers and a gothic rose in the center. Sculptures, most of which had to be replaced at the beginning of the XX century, depict the apostles, Old Testament characters, bishops and angels. The main attraction of the cathedral is the frontal altar, dating from the beginning of the 14th century, now located in the chapel gallery. It was built in honor of St. Olaf - the Norwegian king and national hero, whose relics are in the cathedral. For a long time the church was the place of the coronation of the Norwegian monarchs (the coronation ceremony was abolished in 1908). Today, the Nidaros Cathedral serves as a Lutheran parish church. Every year it is visited by about 400 thousand tourists. 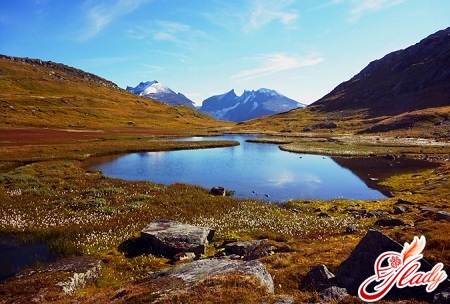 Bryggen is a colorful complex of buildings along thethe waterfront of the city of Bergen, made of wood. The harbor was built during the period of greatest influence of the Hanseatic League, an alliance of trading cities, which in the XIV century monopolized trade along the northern coast of Europe. Numerous fires (the last of which occurred in 1955) razed some of the wooden structures of the shipyard to the ground, but the bulk remained. In 1979, Bryggen was included in the World Heritage List. For many centuries, the harbor is the main attraction of Bergen, and the silhouette of its pointed roofs is perhaps the most recognizable image in all of Norway. Today, there are many different souvenir shops, cafes, restaurants and museums. Most buildings are now used as studio artists. However, it is worth remembering that the main value of the Norwegian land is its nature. Therefore, in addition to historical and cultural monuments, one should certainly visit the natural attractions of Norway.