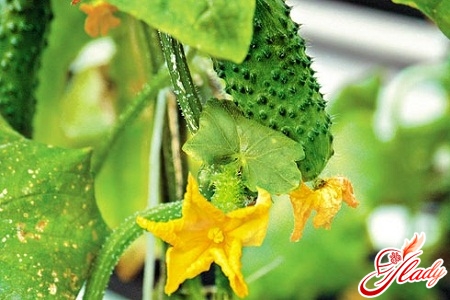 Cucumbers came to us from India - a tropicalregion, therefore they are thermophilic, hygrophilous and light-loving, especially in the early stages of development. They, of course, will grow even if there is a lack of light, heat and moisture, but then their development is very slowed down, and the harvest is greatly reduced. Therefore, if you want to get an early harvest of cucumbers, you should know how to properly grow cucumber seedlings. The root system of this vegetable culture is very vulnerable, therefore, in order not to injure it during picking, it is better to grow cucumber seedlings in peat-humus pots, paper or plastic cups, and not in seedlings. The technology of growing cucumber seedlings is the same for open ground and for greenhouses. Only the timing of planting is different. At the same time, the composition of the soil mixture is of no small importance. Cucumbers well suited mixture, which consists of turf ground, decomposed peat, manure and river sand or old sawdust in the ratio of 3: 3: 3: 1. Add three to four tablespoons of ash, one teaspoon of urea and one tablespoon of superphosphate to the bucket of the mixture, then mix it thoroughly. If there are no old sawdust, then for preparation of the mixture fresh sawdust should be preliminarily poured with boiling water two or three times in order to wash off the resinous substances. Many gardeners prefer to still make the heat treatment of the mixture by frying, steaming or peeling it with boiling water. But some experts consider these methods to be controversial, because along with pathogenic microbes, microflora, useful for plants, is also destroyed. For growing cucumber seedlings, you can also use such an excellent, but inexpensive soil: ready soil for cucumbers "Gardener" mixed with biohumus and the sawdust in a ratio of 2: 1: 2. The "Gardener" soil can be replaced with other ready soils, for example, "Ogorodnik", "Krepysh", "Special-2" or "Flora". Before sowing seeds of cucumbers should be prepared, and, before the stage of swelling, and not germination. Of course, if they germinate, they will ascend faster, but the seedlings of cucumbers are very brittle, fragile. Yes, and store the germinated seeds, if you do not have the opportunity to immediately sow, it is difficult. And with the swollen seeds there are no problems - they can be perfectly stored on the bottom shelf of the refrigerator. Seeds of cucumbers in general conceal a lot of surprises. It is known from practice that the age of cucumber seeds influences fructification. Seeds of last year's harvest yield strong, powerful whips with a lot of male, and hence fruitless flowers. The greatest harvest of cucumbers is obtained from seeds after their three-year storage. In addition, the fertility of seeds is greatly influenced by the conditions of their winter storage. Well dried out seeds, stored in the winter in a dry and warm place, give short, but very prolific whips. Seeds, however, stored in a damp and cold place, later give long whips, but with a large number of vapors. 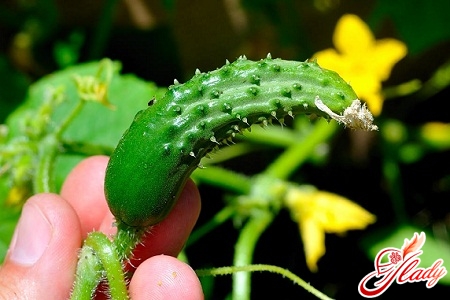 Let us return, however, to the issue of seed preparation. First they are desirable to warm 10-15 days in the sun or in a bag near the oven or battery. If the seeds are stored in a cold room, they must be warmed for at least three days at a temperature of 50 ° C. Many gardeners fill the seeds in a thermos with hot water and stand them there for up to two hours. Such heat treatment promotes increase of seed germination, acceleration of growth and development of weaves, increases the subsequent yield. Then you can start preparing the seeds, which begin with sorting. During the sorting, remove the frail and injured seeds. This is usually done in a three-percent solution of table salt, soaking seeds in it. Pop up seeds are removed, and the rest is thoroughly washed with running water. Disinfect the seeds in a traditional way - they are etched in a 1% solution of potassium permanganate or in infusions of garlic for thirty minutes. After this treatment, the seeds should also be rinsed immediately, and then dried. Now they can be used for sowing. An effective way to disinfect the seeds is to keep them in the aloe juice. To do this, trimmed aloe leaves are kept in a dark place at a temperature of 20 ° C for five to six days, and then squeezed out juice from them. The undiluted juice seeds are placed so that it covers them, and is kept in it for a day. Then the seeds are washed and dried. The next stage in the preparation of seeds is their soaking. It should begin with seed treatment with such growth stimulation preparations as immunocytophyte, epin, gum, ideal, etc. Such processing increases the viability of plants, accelerates fruiting and increases yield. No less reliable and, in this simpler way, is the treatment of seeds with the extraction of wood ash, for which one tablespoon of ash is poured with a liter of water and is insisted for 24 hours. Most gardeners seed cucumbers soaked in clean water just above room temperature. It is better to take water from the freezer. The water temperature is 26-28 ° C, soaking time is ten to twelve hours. Often, vegetable growers increase the duration of soaking until a small sprout appears in the seeds, i.e. sprouting seeds. This usually happens on the third day. But then they must be planted immediately, so that the embryo, which has moved into growth, does not perish. Swollen or crocheted cucumber seeds are often hardened, for which they keep them for three to five days in the refrigerator at a temperature of 0 ° C, on ice or on snow. Temperatures can also be quenched with variable temperatures: first they hold seeds at 0 ° C for twenty hours in a refrigerator, and then four to five hours at room temperature, repeating such cycles two or three times. Another tip: if the cucumber seeds are already poured, and the planting of seeds is postponed for some reason, they should be kept at a temperature of 3-4 ° C in the bottom of the refrigerator. 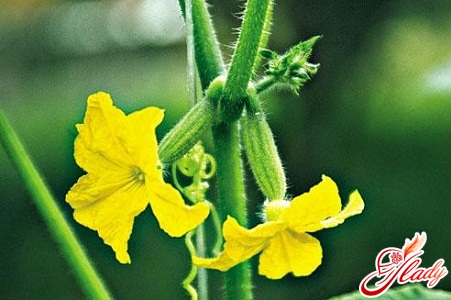 Since seedlings of cucumbers do not toleratetransplantation, the cultivation of cucumbers as seedlings is carried out, as already mentioned above, in polyethylene or paper cups and milk bags or in peat-humus pots. But the best thing for these purposes are the cylinders made from the newspaper without a bottom. To do this, fold the paper four times and, wrapping around the bottle, fasten the edges with paper clips. The cylinder is removed from the bottle and filled with soil mixture, moistening it with a not very concentrated solution of potassium permanganate, Ideal, and at worst, warm water. Prepared seeds are laid out on these peculiar glasses directly on the surface and sprinkled with a mixture not more than one and a half centimeters or are sown in grooves to a depth of one and a half to two centimeters. So that the seeds do not tighten in depth, the soil is sprinkled with warm water, and not watered. Then the containers are densely made up in boxes and placed in a warm greenhouse or on a southern window and covered with a plastic wrap. If the temperature is maintained at 25-28 ° C, the shoots will appear in three to four days. At a lower temperature, this will happen in five to six days. When there are shoots, you need to remove the film and move the seedlings to a well-lit place, and lower the temperature for two to three days to 17-19 ° C in the daytime and 13-14 ° C at night. This is to ensure that the seedling is not stretched. After this, the seedlings are raised by the temperature:

On the windowsill, unfortunately, create suchconditions is rather difficult. For example, if the cloudy weather lasts for a long time, the cucumber can stretch out considerably before the formation of real leaves. If this happens, carefully place the stem ring along the wall of the pot on the soil to the cotyledon, fill it with a loose soil mixture for 1.5-2 cm, and then water it. Within a week, this stem will take root, and the plant will become sturdy and short. Seedlings during long dull weather, even on the lightest windowsill, are best illuminated with fluorescent lamps for 10-12 hours a day. When the cotyledonous leaves unfold, the seedlings need to be watered with warm, settled water with a temperature of about 30 ° C. If the seedlings are grown in a box, then only the seedlings with dark green cotyledons and a good lobe of roots take for picking. Half an hour before the pick, they should be watered abundantly. At the optimum temperature and good lighting, a real sheet appears within a week. If seedlings were grown in cylinders from a newspaper, then they put them in a prepared well, which has the same depth as the cylinder, and then the soil is poured around the newspaper. The newspaper will quickly get wet, and the roots will germinate through it. We advise you to read:

Zamiokulkas. What do you need to know?

Varieties of tomatoes. The best tomatoes for greenhouses and soil

How to grow tomato seedlings?