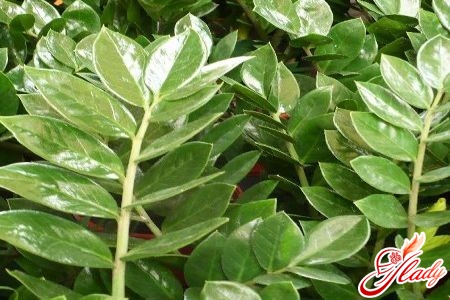 In recent years, the popularity ofan interesting indoor flower zmiokulkas, also known as dollar tree and female happiness. Note that there are other houseplants with similar folk names. For example, a money tree is called a peasant, and the name of a woman's happiness has long been firmly entrenched in a room flower with a spathiphyllum. However, the zamiokulkas stands apart from the usual and even exotic pets. He grows very slowly, looks more than noble, but does not require any specific care. This plant is closely associated with the eastern doctrine of feng shui, according to which it is able to increase the money savings of the owner. Many believe that this room flower is poisonous, someone is trying to find out whether flowers grow in general, and someone connects with this flower all kinds of signs. In a word, not a flower, but a mystery. So let's try to solve this riddle.

In the people, he is caressingly called a lock. And this exotic plant itself belongs to the family of aroids, in which there are also bushes, and lianas, and grasses. Aroids can live in water (like algae) or live in swamps, do well without soil, settling in trees, or grow in the most arid places. And although the majority of representatives of this wonderful family prefers a tropical climate, there are also species that easily tolerate subarctic winters. However, our home zamiokulkas refers to the species of drought-resistant aroids and is botanically called zamiokulkas zamielistny, which in Latin sounds like Zamioculcas zamiifolia. By the way, another name for this species is the Zanzibar precious stone. A must zamiokulkas zamielikas this name to his homeland - stony plateau of Zanzibar. Moved from Africa to our homes zamiokulkas - succulent. What we see above the surface of the soil in the flowerpot is just leaves. And the tuberous trunk of this amazing plant is almost completely hidden in the ground. So, with its exotic appearance and fleshy, dissected leaves, covered with a wax coating, zamiokulkas is required only by its natural habitat. In zamiokulkasa, as well as at all succulents, leaves and leaf petioles are considerably thickened. In nature, this is necessary for accumulation and saving of moisture. A wax coating on the leaves reduces its evaporation and protects the plant from sunburn. Flowers zmiokulkasa very original and do not look like flowers in the usual sense for us. The inflorescence of this plant consists of a large pale cob and a light green veil. Such nondescriptness of the flower is explained, again, by the natural habitat and by the established method of pollination - the pollen is transferred only by the wind and by a few creeping insects. In the botanical catalogs zamiokulkas came in the early nineteenth century under the name of kaladium zamielistny. His modern botanical name, he received only ninety years later, and grow in room conditions it began only in the late twentieth century. First zamiokulkas replenished the collections of professional florists, and then became popular among amateurs. Today, this exotic flower is experiencing a peak of popularity. It has not yet lost its appeal as a rare exotic plant, but has already become a fashionable indoor flower and decoration of any fashionable interior. 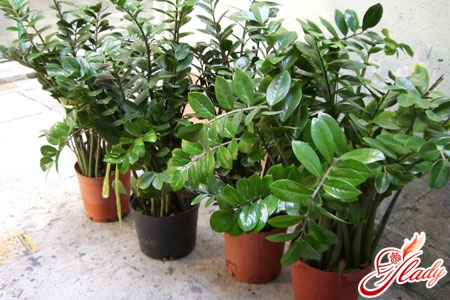 In addition to its obvious decorativeness, this flowerhas also a symbolic value. So, for example, in the people it is known as female happiness. You can, of course, argue and argue that female happiness is a completely different flower, but no. According to the rumor, zmiokulkas really can somehow magically affect women's happiness. But! First, for this it is necessary that it be presented, not bought. Secondly, the miraculous properties of this plant are awakened only during the flowering period. But to achieve from zamiokulkasa flowering is very, very difficult! But if you believe in signs, then, as soon as the zamiokulkas presented to you blossom, happiness will immediately knock on your door. Yes, not just happiness, but feminine. By the way, one of the versions of the origin of the name of female happiness is a very unusual kind of flowers themselves zamiokulkasa. The fact is that the flower of this houseplant remotely resembles the flower of the spathiphyllum, firstly, and secondly, it has an ambiguous resemblance to the main male dignity. In general, with sufficient imagination in the flower zamiokulkasa can see phallic symbolism: in fact, this impressive size of the ears causes certain associations. So decide for yourself, in jest or in serious, specially or mistakenly for this flower, this unusual name is fixed, which promises happiness to all its owners. But about the other popular name of the plant doubt should arise. But only on the condition that you believe in omens and follow the eastern teachings of feng shui. And the fact is that according to the teachings of feng shui, zamiokulkas is able to attract money to the house, as well as another mascot flower-a fat tree (money tree). Only here to awaken the financial magnetism of a fatty woman, according to the rules of feng shui, it is necessary to dig in coins with a plant, and a dollar tree is simply enough to settle in your house. According to the Feng Shui rules, all talismans must be located in the appropriate "thematic" zones. So the pot with zamiokulkasom should be placed in the Wealth sector, which is located in the south-eastern part of the house or a separate room. By the way, all the zones of influence in your house can be determined using the Bagua grid - a special feng shui tool. It is possible that the dollar tree got its name not only as a talisman of wealth in feng shui, but simply because of the appearance of its dark green round leaves. Perhaps, because this originally very expensive and rare plant could be found only in rich houses, the wealthy owners of which, of course, were overseas money. Agree that the concept of feng shui and dollars are virtually unrelated to each other. Nevertheless, this monetary mascot of feng shui was named just a dollar tree. However, we leave the solution to this question to specialists. It is enough for us that Zamiokulkas is recognized as a feng shui talisman for attracting wealth, and also became a kind of talisman for women's happiness. In a word, this flower not only looks fashionable and fashionable, but also brings its owner faith in luck, wealth and happiness to ladies who believe in signs. The flower is, although unpretentious, but evokesset of questions. For example, the question of whether a poisonous zamiokulkas or not, is of interest to almost all amateur growers, since professionals know that any representative of aroids is toxic to one degree or another. So, zmiokulkas is poisonous. But do not be scared and do not panic: it is not poisonous, and it is one of the conventionally dangerous plants. This indoor flower will not bring you noticeable harm. The whole flower is not poisonous, but only its leaves, but the greatest harm it can cause a person is an allergic reaction. Therefore, knowing about a similar characteristic of your body, work with glaucoli in gloves. It is conditionally dangerous for pets. If your bird or pussy tastes this indoor flower, it does not exclude the same allergic reaction or intestinal frustration. So just keep it out of reach of children and animals. This houseplant is very unpretentious, but it has its own characteristics. So, for example, it is drought-resistant, but likes periodic spraying and washing of leaves. In winter zmiokulkas perfectly feels in the room, and in summer it is better in the open air. The thing is that the zamiokulkas grow very slowly, in winter it is at rest, and during the vegetative period (warm season) its growth is intensified by moisture, heat and light. In winter zmiokulkas watered rarely, do not spray and in no case transplanted. All manipulations with the plant are carried out only in the spring-summer period, and in winter it should only be watered. However, in the apartments the air in the winter becomes very dry due to the heating devices. Therefore, even in such a drought-resistant plant as zmiokulkas, the tips of the leaves may begin to turn yellow. In this case, it is necessary to increase the humidity in the room, and spray the flower, trying to moisten not so much its leaves as the air around the plant. New shoots at this time of year, zamiokulkas does not give, but its leaves continue to grow, but so slowly that it is almost imperceptible. And interestingly, the old leaves grow better if the pot is small, but it gives new sprouts after transshipment to a more spacious pot, where the soil is renewed, or after dividing the bush. In general, timely transshipment of the plant always yields a good result: zmioculcas grows better and is sick less. Only after transshipment, the land must completely cover the tuber and horses of the plant. Although zamiokulkasa diseases occur infrequently, he also may become sick with improper care. For example, the excess of moisture from his black leaves, so wet the soil in the pot is absolutely impossible, and the water from the pan must necessarily be drained. The leaves turn black after the plant is too cold. In these cases, it is best to transplant the flower and completely renew the soil, since the old earth can be contaminated with putrefactive bacteria. Poorly affects the growth of zamiokulkasa and depleted soil, so fertilize the flower, too, must be any complex fertilizers. For the cultivation of zamioculcas, no special soil is required, but ordinary turf ground, or even better, soil mix, which includes sand, leaf and turf land in equal proportions. When watering a flower, it is necessary to be guided by the state of the soil in which it is. Between the next watering, the soil in the pot should dry well, since the lack of moisture of zamiokulkas is much easier to transfer than its excess. So for the successful cultivation of zamiokulkasa you only need to create close to the natural conditions - warmth, good lighting and moderate watering. Agree that it is very, very simple. Be attentive to your pet, and do not ask why the zamiokulkas is not growing. It grows, only very slowly. But he lives for a long time and does not bother special. That's why many people prefer to buy an adult plant. However, true lovers and connoisseurs slow growth does not bother. The process of growing this exotic brings no less pleasure than the breeding of many other indoor flowers. We advise you to read:

Kalanchoe Blossfeld - care of the plant

Money Tree. Care of the plant