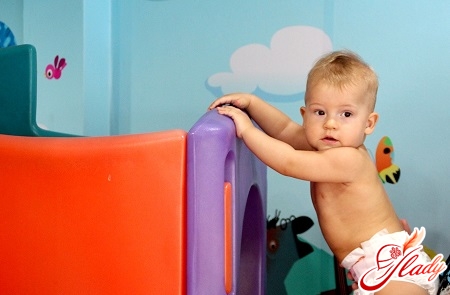 Time runs inexorably. It seems that only yesterday your baby was born, notifying everyone of this with loud crying, and today he is already sitting on his own, crawling and even trying to stand on the legs not yet strong. 9 months is an important stage in the development of the child, when he actively learns the world around him and acquires new skills. The fewer months remain until the year, the faster and more noticeably the development of children. A 9-month-old baby weighs 8.6-9 kg, and his height reaches 70-75 cm. Naturally, these figures are averaged and parents should not panic if the growth and weight of their baby is slightly different from the usual ones. But in the case when there are significant deviations from the norm, the pediatrician should send the crumb to the examination.

Karapuzu at 9 months unusualactivity. At this age the child begins to crawl quite well, and he makes a lot of effort to thoroughly study the surrounding space. The kid tries to touch everything, turn, open and taste, so parents need to hide from him all sharp and small items, household chemicals, medicines and other things that can harm his son or daughter. To ensure that your karapuz does not put his fingers into the sockets, get special stubs for them. It is especially dangerous to be a kid in the kitchen, where he is at every turn in danger, in the form of a boiling pot or kettle, which he can easily overturn. Parents need to ensure maximum safety for crumbs during their waking hours, so you can not leave it unattended. The child holds his back perfectly and sits, he can easily sit up from a prone position. 9 months is the period when the crumb makes attempts to climb, holding the hand of the mother or surrounding objects. However, it is still very difficult to stand without support. Do not force the baby to stand on the legs, if he does not aspire to this. For some actively creeping children, the desire to gain a foothold comes a month or two later than those who do not crawl. The child's speech is actively developed and enriched with new sounds. Krokha easily pronounces simple syllables and the words "na", "ma", "ba", "mom", "dad", manipulates the loudness of the voice and tries to repeat some simple words for adults. At 9 months the kid easily points with his finger at familiar objects, which are called to him by adults and performs basic requests ("give", "take", "go to the pens"). The problem with the pot for most nine-month-old children ceases to exist. Usually at this age the child signs or sounds makes it clear to adults about their physiological needs and allows you to sit yourself on a potty. But there are cases when the baby in 9 months can not "make friends" with the pot. If you have such a problem, pay attention to the pot. Maybe it's just cold or uncomfortable for crumbs. 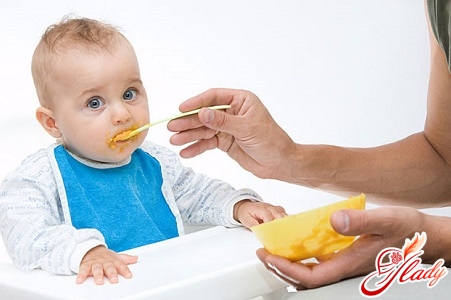 Nutrition for a nine-month-old baby

Many nine-month-old kids continuebe on breastfeeding, but their diet is already quite diverse. In addition to mother's milk, they gladly eat milk porridge, soups with meat, fruit and vegetable purees, sour-milk products. In 9 months, you should enter boiled sea fish in the baby's menu, choosing low-fat varieties (hake, pollock). Children prone to allergic reactions, fish should be given with extreme caution, starting with a tiny portion. If the baby has enough teeth to bite and chew, you can carefully offer him a bite of hard baby cookies or drying. With the help of a solid meal, the baby will massage its itching gums. However, it should be watched that the child does not bite off the biscuit a large piece, since it can choke. Nine-month-old baby should be taught to drink water from a mug. Buy him an unbreakable little cup with two handles, which he can easily hold in his hands. Most young mothers believe that their crumbs are already old enough to give him a piece of smoked sausage, fried cutlet, a spoonful of salad "Olivier" and other food from a common table. Doing this is impossible, because the children's digestive system is not able to cope with heavy and fatty foods. As a result of such feeding the baby from an early age will have problems with the liver, stomach and pancreas.

Buying a 9-month-old baby doll, givepreference for soft little animals, sound and mobile toys. Given that the modern market of children's goods is filled with low-quality products, buy your baby toys in branded stores or at least require a certificate of quality for products. In toys, which will be played by your child, there should not be sharp and poorly fixed details. Since a crumb at 9 months has a habit of pulling everything in his mouth, take care that his toys are always clean. 9 months is the age when the child begins to collect the pyramid, to push various geometric figures into the necessary holes and build towers from cubes, so get these developing games for him. They will not only be favorably displayed on improving the state of fine motor skills of crumbs, but will also positively influence its intellectual development. With the kid at this age you can play in a variety of games aimed at improving coordination of movements. Teach your child a game in "Ladushki", roll him a ball on a flat surface, invite him to show on his face a nose, mouth and eyes, give him a piece of paper, and let him tear it. 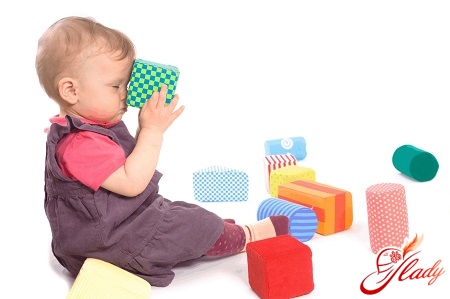 A dream in the life of a 9-month-old baby continues to playimportant role. The child should sleep at night for at least 10 hours and rest during the day 1-2 times for 1.5-2 hours. It is important that the baby goes to bed at the same time, in which case he can easily fall asleep and he will always wake up in a good mood. From the age of nine months old, one can begin to read the simplest fairy tales before going to bed, because reading perfectly develops the imagination of small children. Normal development of the baby is impossible without fresh air. Walking with my mother on the street should become a regular activity. Do not avoid walking in bad weather, because the cold helps to temper the child. Just dress your child warmly and do not worry about anything. It will be good if your crumbs at that age will have their first friends. Nothing develops the child as much as communication with other children. By the way, a walk can be turned into an exciting game: show your son or daughter flowers, leaves on a tree, a cat, a bird. Invite the baby to copy the barking of a dog or the buzz of an airplane in the sky. The child with interest will absorb new information. A child in 9 months easily distinguishes familiar people from strangers. He cautiously meets any new person in his environment and can burst into tears if the stranger approaches him too closely or takes him in his arms. Adults should remember that a sudden loud shout or scream can scare the baby, so in his presence, do not show violent emotions.

Determine the development of your child in the ninth month of life will help a simple mini-test. So, the kid does not lag behind his peers, if he:

If your child successfully fulfills most of thethe above-described actions, it means that his physical and mental development is normal. Encourage the activity of the baby, communicate with him as much as possible, read books to him and sing songs. The karapuz, surrounded by care and love, will grow healthy and make you happy with new achievements.

Exercises for the development of fine motor skills

Winter clothes for children. How to choose a winter overall for a child?