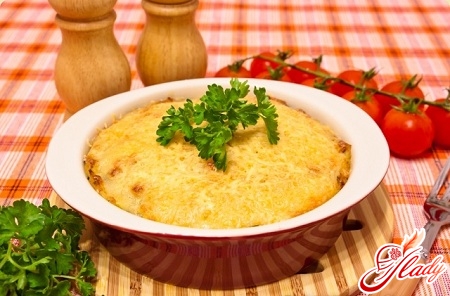 Mashed potatoes are good by themselves. Not even as a garnish, but just like that: with cucumber and tomato. True, when it is only cooked, made and served. The second day is not the same. And pounded and flavored with oil and milk potatoes are put in vareniki and pies, cheesecakes and casseroles. By the way, about casseroles. Casserole from mashed potatoes is an excellent dish for a hot breakfast, for a children's menu or a light dinner: depending on how to cook this casserole. And we will talk about possible options for its preparation.

Preparation: Mine, clean, cut and boil potatoes in slightly salted water. After this, we prepare the traditional mashed potatoes by mashing the potatoes with tolik and adding the warmed milk. Solim to taste. Or we take for the casserole the ready puree left over from the previous meal. So, cool the mashed potatoes mixed with cottage cheese, add the egg and whisk or mix thoroughly. Now put in this mixture oat flakes (Hercules), mix again and put it into a baking dish, oiled and sprinkled with flour, breadcrumbs or a manga. We put the casserole in a preheated oven and wait for it to form a golden crust. 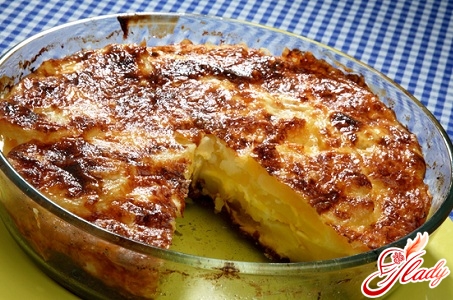 Preparation: Puree can be taken ready or boiled and beat with the addition of milk, butter and spices (to taste). To make a fish filling, pour the milk into a saucepan and let it boil, then put a pinch of salt, nutmeg and black pepper. Then add the finely chopped onion and chopped salmon fillets into a saucepan. Stew on medium heat for about three to four minutes. Now add the rice flour dissolved to the state of the slurry (you can replace the wheat flour) and continue to cook, waiting for the sauce to thicken. In the end of preparation we put sour cream and finely chopped parsley into the sauce. In the batch form for baking (coconut, pots), first lay the sauce, and on top put the mashed potatoes. Bake in the oven on medium heat until a characteristic golden crust appears. Ready casserole garnish with green peas and canned corn.

Casserole with egg and onion

Preparation: Potatoes are cleaned, washed, cut into pieces and cooked in salted water. Then the water is drained, the potatoes are dried and kneaded with tolstalk, adding to it one raw egg and half a glass of hot milk. Boil the hard-boiled eggs, and chop the onion and fry it in butter or vegetable oil. Mix the chopped eggs with onion roast. Fry the frying pan or baking dish with vegetable oil and sprinkle with breadcrumbs. Put the first layer of mashed potatoes, then mixed with onion eggs, and then again a layer of potatoes. Pour over the sour cream and sprinkle with breadcrumbs. Solim and season to taste. Bake on moderate fire for about fifteen to twenty minutes.

Preparation: Squid we defrost, clean, remove the film and remove the insides, and rinse several times in cold water. We put the pan on the fire with water, put in it half a teaspoon of salt and let the water boil. In the boiling water we lower the squid and cook for just one minute. Now let's cool the squid, cut it into small pieces and let it through the meat grinder. The head of onions finely chopped, put in a frying pan with preheated vegetable oil, add the same stuffing of squid and fry. Boil the potatoes for mashed potatoes, before washing it, peeling and cutting it. Hot potatoes are kneaded with a tolstalk and beat with butter. Now take the frying pan or baking dish, grease it with oil and sprinkle with breadcrumbs. We put it in a mashed potatoes, put the minced meat in the second layer, and lay out the remaining potatoes on top. Sprinkle with vegetable oil, sprinkle with breadcrumbs and send to the oven for about twenty minutes. The casserole can be considered ready when it is covered with a ruddy crust. 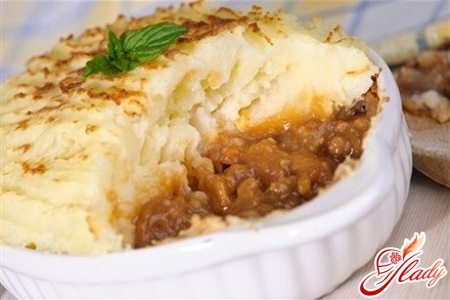 Casserole in Estonian with fish sauce

Preparation: Mine, clean and cut potatoes into pieces, after which we set it to boil in salted water. With the finished potatoes, drain the water and make mashed potatoes. Chop onion and fry in oil. When the onion gets golden color, spread the fry in the mashed potatoes. There also add warmed cream and egg yolk, salt and pepper to your taste and mix thoroughly. The form for baking is lubricated with oil, we put in it mashed potatoes, pour sour cream and put in preheated oven for twenty minutes. While the casserole is being prepared, we make the sauce. Fish fillet cut into small pieces, and finely chop the onions. Onions are fried in butter mixed with flour, and then gradually pour in hot milk. Stir, let the sauce again boil and put the pieces of fish into it. Continue to simmer for about ten minutes. In the end, add sour cream, chopped greens, salt and pepper. We serve pudding with hot sauce. Similar to the previous recipes, you can prepare a casserole with almost any additional ingredients. Very delicious will be a casserole from mashed potatoes with mushrooms, with meat, with chicken, with minced meat, with vegetables. In a word, with everything that is combined to taste with potatoes. Try it. Cook with pleasure, and a pleasant appetite for you! We advise you to read:

Tomatoes stuffed with cheese and garlic

Pork loin in the oven