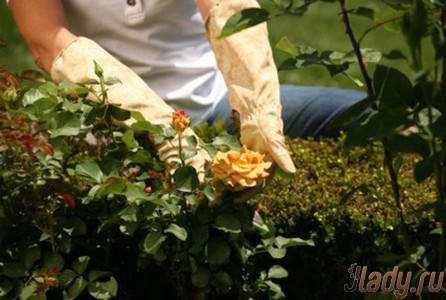 Before the beginning of industrial fruiting, the gardenis called young. His trees are in the preparatory period, which P. G. Shitt calls the period of increased growth. The more quickly the tree takes root in a new place, the better and faster it will grow in subsequent years, the sooner this preparatory stage will be passed and the plant will begin to bear fruit sooner. It is believed that the annual growths of apple trees in this period should not be less than 50 cm. The task of agrotechnics in a young garden is to create the most favorable conditions for the normal growth of trees (supply of water and nutrients, protection against diseases and pests). It is also necessary in these years to form a regular, solid, sufficiently sparse crown, able to lay and carry high yields. One should not forget, especially in the early years, about caring for garden and windbreaks, which have a great influence on the condition and growth of fruit trees in the garden.

Very serious is the issue of inter-rowcultures in young gardens. On the one hand, it is economically unprofitable to leave the row sprouts still not occupied by the roots, but on the other hand, the introduction of inter-row crops will require considerable expenditure of manual labor to process not only themselves but also the stubble strips. Practice has shown that, in most cases, in large gardens, row crops lead to an end to the processing of these bands, overgrowing the garden with weeds and settling in mice. In the absence of intercrop cultures, cross-dressing yields excellent results in such gardens. When cultivating inter-row crops, it is necessary to reduce the width of the strip occupied by them every year, taking into account the growth of roots. In no case is it allowed in the garden to sow as intercrop cultures of grain breads, corn and sunflower seeds for grain. Absolutely necessary elements of any system of soil content in a young garden should be black steam, 1 -2 sowing perennial grasses, but necessarily stratified, and in non-chernozem regions and lupines for gradual cultivation of soil in front of growing roots. In small gardens, intercropping is necessary. Here, in addition to vegetables, berry bushes (except raspberries) and especially strawberries should be included among them. It is clear that when fertilizing the garden soil in the case of intercropping, their needs must be taken into account. It must also be remembered that in the presence of interrow crops in both industrial and private gardens, the struggle against pests and diseases of the garden is very much complicated, at least when using modern poisons that are toxic to humans and warm-blooded animals and possess the property of accumulating in the body. One of the more promising intercrop cultures is potatoes, especially early varieties. With the nesting planting of this crop, it is possible to cultivate the soil in two directions, carry out the control of pests and diseases and timely autumn tillage. Even before the roots of the apple tree close, usually 5 to 6 years after the planting of the garden (at a row spacing of 8 m), the sowing of inter-row crops in the gardens is stopped, as the width of the tapes free from the roots of the apple tree tapers excessively. Usually, by this time, industrial crops of many varieties are already beginning to be harvested, and this also makes it necessary to stop the sowing of inter-row crops.

Phosphate-potash fertilizers, inthe opposite of nitrogen, are firmly absorbed by the soil, so the practice of applying fertilizer to shallow autumn plowing and digging up stubble strips and row spacing is of very little use. Only the deep introduction of these fertilizers into the zone of propagation of the main mass of roots proves to be quite effective. MN Yazvitsky's works on the former were of great industrial interest. Moscow fruit and berry experimental station (now the Scientific Research Zonal Institute of Horticulture of the Non-chernozem Zone). On the basis of his experiments, MN Yazvitsky came to the conclusion that the annual application of phosphorus-potassium fertilizers under the apple tree is not necessarily and ineffective, that the best way of introducing them will be focal, repeated every 5-7 years. Foci must be either in the form of pits (wells), located along the periphery of the crown, or in the form of grooves around the stump. Mineral phosphorus-potassium fertilizers, introduced into the grooves, increased the yield of apples almost 5-fold in his experiments. When applying the same fertilizer in a mixture with organic, their effect was even stronger-the yield increased 8-fold. MN Yazvitsky conducted experiments on poor podzolic soils of the Moscow region, where the trees are very responsive to fertilizer, so the question arises: can its conclusions be fully extended to the comparatively rich chernozem and gray forest soils of the southern half of the middle zone? The chernozem and gray forest soils are much more fertile than the soddy-podzolic soils, so the effect of deep focal fertilization on them appears to be less, but it will certainly be, since the absorbing capacity of these soils is much larger than that of podzolic soils, and the use of the applied surface phosphorus-potassium fertilizer will be even less. Thus, deep focal application of some phosphorus-potassium fertilizers or better together with organic fertilizers will be promising in the entire middle belt-both on podzols and on chernozems. In the gardens, the best hearth can serve as a ring ditch depth and width of 40 -50 cm, excavated in autumn on the periphery of the crown and filled with soil, fertilized with a mixture of phosphate-potassium fertilizers with humus or manure. In the Moscow area, MN Yazvitsky recommends the introduction of 60 kg of manure, superphosphate 1.5 kg, potassium chloride about 700 g and lime 3 kg on a young tree at the age of 8-10 years. On the chernozems, lime, of course, is not needed and will even bring harm, the norms of the other fertilizers can not be changed. In large industrial gardens, the process of introducing fertilizers and, at the same time, deep cultivation should be mechanized; For this purpose, a grape chisel-cultivator or grape universal machine VUM-60 can be used here, loosening the soil without recourse to the formation and simultaneously allowing deep fertilization. The first pass of the chisel - cultivator or VUM - 60 should be made in the autumn, for the second year after planting the garden, the second - after 5 years. Each time the cultivator or VUM-60 pass is made in both directions (along and across the rows) in such a way that it is ahead of the growing roots and in advance prepared for them a loose and fertilized soil to a depth of 40-60 cm. As phosphorus fertilizers more often in general, superphosphate is used, it is better granulated. On acidic soils, it can be replaced with phosphate flour. Of potassium fertilizers, potassium sulfate is the best, but potassium chloride, contained in potassium salts, is more often used. For 1 hectare, 10 centners of superphosphate and 2 -3 centners of potassium chloride or 3 -4 centners of potassium salt should be added at each pass. When fertilizing private gardens, it is good to replace potash fertilizers with ash ash. It is very useful for plants not only for the high digestibility of phosphorus and potassium in it, but also for a significant content of trace elements. In large gardens, it is necessary, insofar as possible, to replace at least part of the potash fertilizers with ashes. Much easier is the case with the fertilization of apple trees with nitrogen, since nitrogen fertilizers are almost not absorbed by the soil, so they are easily mobile and even with the most superficial application can be rained down to the depth of occurrence of the bulk of the feeding roots. Here lies another danger, as a result of great mobility, nitrogen fertilizers can get into deep layers of soil that are inaccessible to the roots. For this reason, nitrogen fertilizers, with sufficient moisture, first, only superficially, under cultivation or loosening and, secondly, in parts, at different times. In young orchards, where the roots do not occupy the entire width of the rows, nitrogen fertilizers are introduced only within the range of the trunks. Usually it is recommended to introduce nitrogen fertilizers (ammonium sulfate or, better, ammonium nitrate) in a young garden in two steps: in the early spring, under the first loosening of the soil, and in the period of intensive growth of shoots, ie, after flowering, at the end of May. At 1 square. m of the trickle circle give for each reception 20-25 g of ammonium nitrate or 30-35 g of ammonium sulphate. Such a fractional addition of nitrogen can really ensure its contact with the roots only under condition of irrigation or with sufficient precipitation at that time. In arid conditions, when the capillary water in the soil often rises, the superficially introduced nitrogen will not reach the roots and will not produce any effect. In this connection, under these conditions, one-time and, as early as possible, the introduction of ammonium nitrate (ammonium sulphate is more readily absorbed by the soil, and moreover on podzolic soils, in addition, enhances their acidity) is most effective. Thus, soil fertilization in a young garden is reduced to two basic methods:

Nitrogen fertilizers can be conditionally assigned tomanure. But its significance is much wider: its application to ordinary plowing (15 -20 cm) not only enriches the soil with all elements of nutrition, including microelements and even carbon dioxide, but also improves its physical properties-structure, moisture capacity, air permeability, absorbing capacity, which prevents the formation of excessively high harmful concentrations of soil solution and creates a buffer that maintains the stability of the soil reaction. Fertilizing the soil of gardens with manure at least once every 3 years is highly desirable. The rate of manure application is from 20 to 40 tons per 1 ha (from 2 to 4 kg per 1 sq. M of the near-barrel circle).

"A gift horse ..." Or how to do so to receive and give the desired.