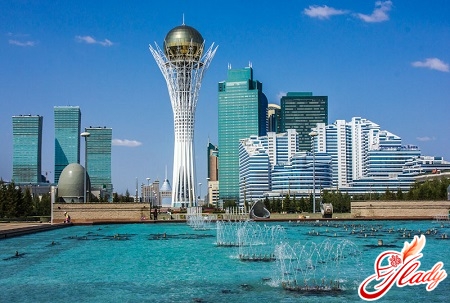 Kazakhstan is one of the post-Soviet countries,located in the north-western part of Asia. The common border of this state with Russia extends from the Caspian Sea to the Altai Republic. The entire territory of the country is the steppe. You can get to Kazakhstan by plane, by train, by bus from border areas or by private car. With the phrase "sights of Kazakhstan", Balkhash lake comes to mind (Fig. 1). The uniqueness of this reservoir is that one part of it - with fresh water, and the other - with a salty sea. The lake occupies a huge territory, in some places its depth reaches 27 m. It is known not only in the territory of the republics of the former USSR, but also in Europe, Kazakhs and tourists from other countries, in hotels and tents annually on its shores. But this is by no means the only interesting place in this great steppe country. In Kazakhstan there are unique corners of nature and man-made historical and modern monuments worthy of attention of tourists. Nature is a fine artist and sculptor, shehas created amazing places on our planet, including in Kazakhstan. In addition to Lake Balkhash, which has already been mentioned, there are other unusual reservoirs on the territory of the country. For example, Lake Issyk (2), Big Almaty (3), Borovoe. Issyk is a mountain water body located 70 km from the city of Almaty. Until 1963 it was one of the favorite places of rest for locals and guests of the state. But in 1963 a tragedy occurred on the lake: a mighty mudflow descended from the mountains, destroying a dam and killing many people. After that, the lake became much shallow, the surrounding landscape changed. Now people are still, as before, go to rest on Lake Issyk, but the tragedy has remained in the memory of the Kazakhs forever. Big Almaty is located high in the mountains at an altitude of 2.5 km above sea level. The water area of ​​the reservoir is surrounded by forests and mountains covered with snow, the color of water is saturated with turquoise. Most tourists come there to climb the mountains. The most famous peaks near the lake are the Soviet, the Ozerny, the Tourist. Borovoe is a terrain in Kazakhstan between the cities of Astana and Kokshetau, where several lakes are located: Shchuchye, Borovoye, Kotyrkol, Svetloe, Gornoe and others. Besides lakes in Kazakhstan, there are other wonderful natural monuments. These include various national parks and reserves: Aksu-Dzhabagly - the oldest national reserve, Altyn-Emel, Bayanaul, Naurzum reserve. In the natural park Altyn-Emel there is a famous singing barkhan, with the wind in dry weather, the grit produces sounds similar to the sound of the organ. The uniqueness of the Naurzum reserve is in plants that grow only on its territory. 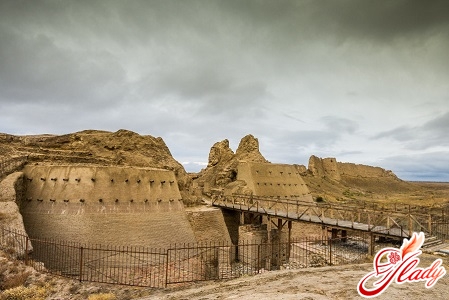 There are several monuments on the territory of the countrystories. The most famous of them are burial mounds with ancient graves, for example, Bes-Shatyr or Issyk. Antiquity lovers can also visit the city of Turkestan, founded in the 5th century, through which the Great Silk Road passed. The city retained the ancient fortress walls (4). Next to it is located and another ancient city - Sauran. The modern landmarks of the state include the Palace of Peace and Accord in the form of a pyramid (5), the Khan-Shatyr shopping and entertainment center in Astana, the capital of Kazakhstan, the Astana-Baiterek monument (6), the reduced map of the country "Atakemen" (7), etc. Kazakhstan is a modern state, rich in natural and man-made monuments, every Kazakh should be proud of them and protect them.

Malta - attractions of the resort

Crete: sights and myths of the island

By car in Europe, travel