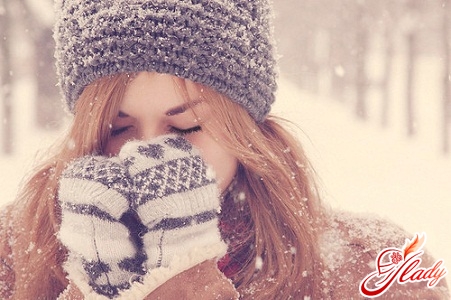 Strictly speaking, no special wisdom inknitting mittens is not. If you know how to hold knitting needles, you know what is the front, back and air loop, then you can quite easily connect the gloves. Knitting mittens with knitting needles for beginner needlewomen is the most suitable experience. And if you are already experienced enough, you can connect not just warm mittens, but quite fashionable and exclusive winter accessory. You can tie the mittens crocheted. It is possible on two spokes: cross knitting, two halves or with one seam. And you can by circular knitting on five knitting needles. Knitting mittens on five knitting needles is called grandmother knitting. This way, for a long time, knitted mittens, gloves, socks, and tracks. Let's take a closer look at this method. How to tie mittens on five spokes?

Circular knitting on five spokes is also calledtubular. Mitten is rounded and has no seams. All loops for the future gloves are evenly placed on four spokes. The fifth spoke remains free of loops. She takes turns replacing all the other knitting needles. In circular knitting edge loops are not present, and all facial loops necessarily are tied for the upper lobules (the thread is at work). Knitting is done only on the front side of the product. One loops are considered loops knitted on four spokes. For convenience, the knitting need to be numbered (mentally). On the first and second spokes knit upper mittens, and on the third and fourth - palm. When knitting patterns on five spokes, the following rules are observed:

First, select the yarn. Mittens can be knit from wool, mohair, downy yarn (at your discretion). You can make them monophonic, multicolored or melange. Determine by starting knitting the mittens with knitting needles: are the patterns or relief patterns more suitable for your mittens? They can be with jacquard pattern or with ornament, striped or openwork, with pigtails, bumps or fringe. Cuffs on mittens are usually knitted with an elastic band. For some mittens, you need from 40 to 150 grams of yarn, depending on the size and pattern. Knitting should begin with the calculation of the number of loops. Tie the pattern (about 14 loops wide and ten rows in height), slightly stretch it and measure the density of the knitting. A sample is better to bind both for the rubber band and for the main pattern. Measure the wrist circumference, the width and height of the palm. And after that, type the required number of loops (always a multiple of four!) And proceed to the process itself. Knit mitten begin with the cuff (it is knitted with an elastic band 1 to 1 or 2 to 2). 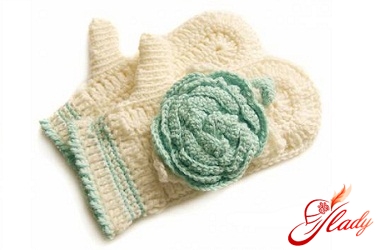 We knit the mitten from the cuff to the thumb

Loops typed on two spokes, divide byfour equal parts. Each part is tied to a single spoke. When you have all the hinges, close the circle. To do this, tie the end of the thread from the set of loops to the thread from the coil. You will have a square of four spokes with the first row tied. The spoke with which you take off the loops during the process of knitting becomes a working one (free). Continue knitting in a circle (in one direction), alternately changing the knitting needles. After you tie the cuff (about 7 cm), go to the main part of the mitten. The distance from the cuff to the beginning of the thumb is knit with the main pattern. If the pattern makes the main fabric already narrower than the cuff (look at the pattern), then add one loop on each spoke (from one loop two). After tying the mitten to the base of the thumb, leave a hole for it. For the right hand - on the third spoke, for the left - on the fourth.

We fix holes for the thumb

How to make a thumb hole onmitten? There are two ways to do this. In the first case, the hole remains open (it is more convenient to try on a mitten), in the second case it is closed. The first way. On the spoke, where there will be a place for a finger, tie the first loop. All other hinges except the last, take off on the safety pin. After that, on the working (right) needle, dial as many air loops as on the pin. Make last loop. The second way. Spray the first loop with a thread from the coil. Next, connect all the loops with the front loops of the other thread (better than the color). Put them on the third spoke again and tie the main thread again. As a result, you will get a solid canvas with a color stroke. Next, knit the mitten with the main pattern before starting the loops on the toe (top of the mitten).

We knit a mitten of mittens

In its upper part the mitten descends on a cone. In order for the mitten to sit smoothly and beautifully on the hand, it is necessary to untangle the toe. To do this, at the end of the knitting you need to subtract the loops. Depending on how the hinge is reduced, the top of the mitten can turn round or pointed. The rounded decrease is suitable only for mitten hosiery, since it breaks the pattern. But you can also knit a mitten with a pattern, and before decreasing the loops go to stocking knitting. To reduce the loops in a spiral on each spoke, the first two loops are tied together by the front of the lower lobules. Loosen the loops in each row until there are only two loops left on the spokes (a total of eight). After that, tear the thread off the tangle and thread it into the needle. Pick up all eight loops with a needle, pull and fasten the mittens from the underside. For a rounded down, do everything the same, not with the first loops, but with the middle loops. To obtain a beautiful pointy toe, subtract the loops as follows. First knit the two loops of each knitting needle together. On the first and third spokes, tilt the hinges to the left (hinges behind the back wall), on the second and fourth with the slope to the right (behind the front wall). After the toe is tied, the mitten is almost ready. It remains only to untie the thumb.

We knit a thumb

The thumb of the mitten is knitted on three spokes,so the number of loops for it should be divided by three. If you have removed the thumb loops for a pin, then you need to knit it in the following way. From the pin of the loop, remove the needle, and the loops of the upper row, type new ones. Add two hinges from the side broaches. Knit in a circle to the nail of the thumb. Then start loosening the loops in a rounded manner or in a spiral. After you have only six loops left on the spokes, assemble them on the thread (as in the case with the toe) and secure it from the wrong side. With the second method, carefully pull out the colored thread. To prevent the hinges from escaping, gently rip off the mitten through the fabric. Collect all open hinges on spokes. If the hole is too wide, lower one loop on each spoke. If narrow - add two loops from the side broaches. Next, knit just like in the first case. If knitting mittens on five knitting needles seems difficult, they can be knitted with two knitting needles. For example, mittens from two halves. 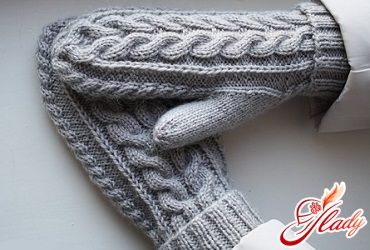 We knit mittens on two spokes

For such mittens, the upperand the bottom, which are then sewn or crocheted. Starting to knit the back side of the mittens, type on the spokes the number of loops along the width of the palm with a small margin. Knit with the selected pattern (or without pattern) to the end of the little finger. Then start to loosen the loops on both sides, tying two loops together. So you will get a mitten with a triangular toe. For a rounded toe, gradually loosen the loops, leaving only a third of their original number open. Remove the remaining hinges on the safety pin. The first half is ready. Proceed to knitting the bottom half of the mitten (palm). Her knitting is somewhat more difficult - here the thumb is tied. Begin to knit the palm as well as the upper half of the mittens. After tying up to the beginning of the thumb, divide the loops into four parts. The three parts of the loops are removed by a pin, the others are put on the spoke so that the thread from the coil is on the sharp side of the spoke. On the second one, draw as many new (air) loops as an auxiliary thread (better than another color). After this, new loops tie a string from the coil (it is on the first spoke). Continuing knitting you will get a rectangular ledge. This is the unfolded thumb of the mittens. Having connected it to the required length, assemble the open loops on the pin (or other thread), and the thread from the coil break off. After that carefully remove from the knitting auxiliary thread, which was left at the base of the thumb. Open hinges and hinges, removed before knitting a thumb, put on knitting needles. Continue to knit the palm with a thread from the tangle, as well as the upper half of the mittens. After completing the knitting, sew the canvas of the thumb with a knitted suture, and pull the upper open loops with a thread and secure it from the underside. Then sew both halves of the gloves. That's all. So, long without hesitation, choose a yarn, a pattern and a model of your future mittens. Take the knitting needles into your hands and comprehend gloves in wisdom in practice. We advise you to read:

How to make a soft toy with your own hands?

Beads with your own hands. How to make a stylish decoration yourself?