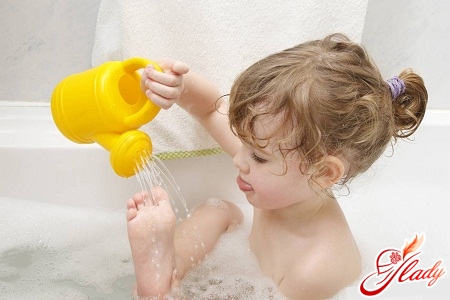 Recently, a healthy lifestyleis becoming more and more popular. In some cases, people choose a healthy lifestyle because it is now fashionable, in another case - because they really care about their health. But anyway, in any case, a healthy lifestyle is a really good choice and a worthy alternative to diseases and medicines. And very many people start to lead a healthy lifestyle with whole families. However, in the event that they are just beginning, most likely, there will inevitably arise a question for reflection - the tempering of the child. And this is supported not only by supporters of a healthy lifestyle, but also by pediatricians. However, tempering a child is a very delicate process. Incorrect actions will not only not strengthen the health of the child, but, on the contrary, can lead to the development of serious diseases. That is why, before embarking on the tempering of a child, parents should properly prepare for this by acquiring the necessary knowledge.

Very often parents ask a question about whichthe same age can begin to carry out the tempering of the child. And doctors answer unequivocally - there are no age restrictions for hardening procedures simply - it does not exist. You can begin to temper the baby at almost any age - even from the very first day of the baby's appearance. In principle, this is the most optimal option. However, of course, young children need a sparing method of hardening. The first thing you need to start doing is letting the baby take air baths. To do this, it is necessary to leave the baby undressed for a certain amount of time. Typically, this time should be about 10 minutes. However, it is necessary to observe several different precautions that will help protect the child from the danger of getting cold:

Also for children of the first year of life for a successfulhardening just need regular and fairly long walks in the fresh air. Doctors recommend walking with the child at least two times a day. The length of the walk depends on the time of the year and the temperature of the air. In the summer, the walk can last as long as desired, and in the winter, provided that the air temperature in the street is not lower than -10 - about half an hour. It is very useful to sleep in the fresh air - try to plan time walks in such a way that they fall at a time when the baby should sleep. Such a dream has a very beneficial effect on the whole organism as a whole, and plays an important role in hardening. Remember to constantly maintain a certain temperature in the room. The child's room needs to be ventilated at least four times a day, after an equal period of time. And doctors recommend doing just through ventilation, as it provides good air circulation. Regardless of the time of year, the child during the ventilation should be in another room. But the child can sleep and open the window at any time of the year - the main thing is that there are no drafts. Another great way to temper the smallest little people is rubbing. It is very simple - after each bath. Take a clean towel, soak it in water and wipe the entire body of the baby. The first days the water temperature should be equal to 36 degrees, but every day the water temperature must be lowered exactly one degree. The final water temperature should be at least 20 degrees. Wiping, like any other type of hardening, can be carried out only with the obligatory condition that the crumb is perfectly healthy. At the slightest hint of a child's malaise, all quenching procedures should be stopped immediately. 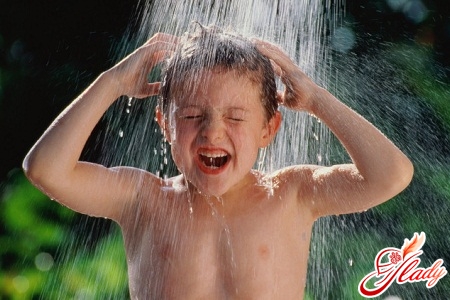 Children over one year old

Tempering of children of preschool age, olderone year, it is easier - the number of procedures is significantly increased. However, in this case it is necessary to be guided by the main principle - do no harm. The most basic of them are described below:

Just like children, older children canwipe. However, they need to be carried out a little differently. Towel or damp sponge soaked in cool water, carefully wipe hands, feet, back, chest, neck. After this, carefully rub the baby's skin with a dry soft towel, until light redness appears. And rubbing the skin is necessary in the direction of the heart - like tempering of preschool children gives a visible result. The water temperature at the beginning of hardening should be approximately the temperature of the body - 36 degrees. However, gradually it must be reduced - per degree per day, not more. As a result, the temperature should be lowered no lower than 18 for children up to the age of seven, and for 15 degrees for school-age children.

After the child fully adapts to thehardening, you can proceed to the next stage of hardening - douche. Pouring is a very effective measure, allowing to temper the child with even greater success. But douche also carries an increased risk to the health of the child, so certain medical recommendations must be followed. Tempering of preschool children requires special care. Pouring in any case should not be done if the child has frozen - for example, if the room is too low a temperature, or if the child has recently returned from a walk. In order to conduct douche, the skin of the baby should be hot. The most optimal time for pouring is immediately after the bath. Beat the baby with warm water first, then cool. Do not water the child from the shower - for this purpose it is necessary to use a jug or a cup. First, pour the back of the baby, then - the chest and stomach, and then - the legs. However, do not stretch this procedure for longer than one minute - otherwise the child can easily get cold. In the case of dousing, as in the case of wiping, the water temperature should decrease very smoothly - no more than one degree per week. In the beginning, the temperature of the water for dousing should be at least 35 degrees, and in the end - no more than 15 degrees. It is also not worth it to shave the child completely with icy water - otherwise he can get sick.

The contrast shower is less useful. It can be taken for children older than five years. However, this water procedure also requires a gradual and consistent approach. Remember this and take your time. In winter, the temperature of the water in the warm phase of the shower should be about 35 degrees, and in the cold phase about 20. The duration of each phase should be about two minutes.

A very good way of tempering a childis gargling with cool water. The principle of reducing the temperature standard - first the temperature should be about 35 degrees, then it must be reduced by one degree every day until it is equal to fifteen degrees. As shown by numerous observations of parents and doctors - pediatricians, such a hardening rinse at times increases the body's resistance to various infections. Children who, for a month and longer, caress the throat with cool water, are several times less likely to suffer from sore throats, laryngitis and tracheitis. And colds too.

In the event that the parents are afraid to conductfull pouring a child, or a child too painful for him, doctors offer a wonderful alternative - douche. For this you will need a little - a basin and water. Put the baby's feet in the pelvis, and just water for about a minute. At the beginning of tempering, the water temperature should be 35 degrees, and at the end - no more than 10. After dousing, thoroughly rub the child's legs, then put socks on it.

Quenching with air is not less useful thanhardening by water procedures. They are conducted on the same principle of air baths. It is best to begin this type of hardening in the spring season, when the air temperature is not less than 20 degrees. Choose a quiet place where there is no wind, no direct sunlight. Undress the baby to the underwear and let him play. At the beginning of tempering the duration of the procedure should be 15 minutes. Gradually, its duration should be increased, bringing to one and a half to two hours. During this procedure, carefully monitor the child's condition. If you notice that the child is frozen - he complained about it, or he got the shivers - immediately put the baby on. Otherwise, the result will be exactly the same - the child can get sick. Do not put experiments on your baby's body. Yes, and ordinary walks in no case can not be neglected. A healthy child over the age of three should spend at least four hours a day on the street. Doctors recommend the child at least two walks, two hours each. And this is true only for the cold season - the exception is only a severe frost, in which the air temperature drops below minus 15 degrees. In the summer, however, it is not worthwhile to limit the time of walks - let the child stay on the street for as long as possible. If parents comply with all the basic principles on which it is necessary to carry out tempering of children of preschool age, they will surely notice positive results fairly quickly. Health, well-being and mood of the child is a worthy result! We advise you to read:

Light feces in the child