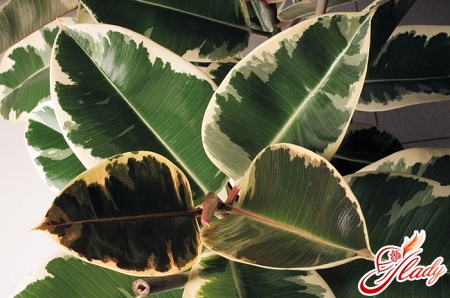 Among all domestic houseplants, ficusoccupies a special place. Today the genus of ficuses is about two thousand all kinds of subspecies, which differ in foliage and the root system. It can be large-leaved and small-leaved trees, with wide or narrow leaves, ampel, ground cover and many others. However, all the people who grow this plant notice that the leaves of the ficus periodically turn yellow, but do not know how to solve this problem. Today we will talk about this and also we will find out, because of what this domestic tree can suffer and how to deal with the diseases that already exist in it.

A little bit about the ficus

Of the whole variety of ficuses, like a roomthe plant is particularly popular with Benjamin Ficus and the rubber-ficus. Such plants today can be seen almost in every city apartment. However, no less attention deserves a lyrate, or, as it is also called, tree ficus, as well as its ampel forms. These plants are not very demanding and fastidious. But, despite this, the ficus is still susceptible to pests and suffers from various diseases that can provoke an excess of direct sunlight or permanent drafts. Does not like ficus and excess moisture. It should be noted that the variegated forms of the plant are more photophilous. By the way, the ficus of Benjamin just belongs to this category. But this does not mean that the tree does not need shading. In winter, you need to create a plant additional quality lighting, so place the pot closer to the window. Otherwise, because of the lack of light, twigs can be warped and problems with leaves may arise. This is the main rule, which is important to observe the owner of the ficuses. However, this is by no means all the problems that can be encountered when growing ficuses of various varieties. It is worth saying that each of these problems arises from the improper care and conditions in which the plant lives. Let's figure out how to create a ficusa as comfortable as possible in your home. 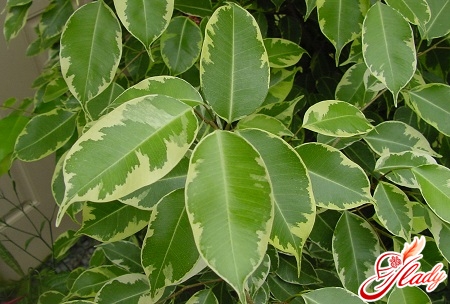 We came directly to considerationthe most serious problems and issues, the main one of which is why the leaves fall off and what causes their yellowing? The reasons here directly depend on the variety of the plant. For example, the rubbery ficus behaves this way in case of waterlogging the soil. Also, despite the fact that the rubber plants are perfectly adapted to the room environment, they can suffer from a lack of light, which, again, affects the tree - the leaves fall off and quickly turn yellow. Excess fertilizing, low temperature indices and drafts have no less negative impact. If we talk about the ficus of Benjamin, then he also can not be called a lover of change. Even an elementary change of scenery, temperature changes and the slightest lack of light can provoke an instant loss of leaves. Why is this happening? In general, in itself, the ficus of Benjamin is a bit more demanding to the conditions than the same rubber-legged ones, therefore, care must be appropriate. Choose for your ficus of Benjamin a stable place and do not rearrange the pot afterwards. Try to create maximum comfort for the plant, observe the basic requirements for care, so that later you do not have to think about why the plant has so many leaves. In addition, a good development of any ficus will be prevented by frequent transplants, because of which the root system first, and then leaves, will suffer. That is why an already grown adult plant needs a transplant no more than once every two years. In the case of more mature plants, a top soil layer is replaced, which can be prepared on its own, taking two pieces of deciduous soil and a part of the sand in combination with the proportion of soddy soil. It is worth mentioning about the natural causes of yellowing and falling leaves. Of course, the leaves of the ficus do not live forever, like all living things on earth. As a rule, the life of a separate sheet is not more than three years. After this period, they first turn yellow, and then fall completely. This is a natural process. Note that in the case of young ficuses, the leaves gradually die from below and the trunk begins to rustle. Why can the foliage of the plant still spoil? As in the case of the Benjamin ficus, and with the rubbery one, a poor-quality substrate or soil can influence this process. It is likely that the plant survived stress, which could have been triggered by a transplant, a sudden change in location or exposure to pests. The way out in this situation, respectively, is substitution of the substrate and rearrangement of the ficus to the former place. The leaves turn yellow and fall also due to improper irrigation. Do not overmoist the plant. Before you once again water the ficus of Benjamin or lyre-shaped ficus, check to see if the soil has completely dried out after the previous watering. To do this, lower the wooden stick to the very bottom - with its help you will check the condition of the soil. In case you have over-moistened the soil, stop watering for about two weeks. If during this period you do not notice improvements, then you have to transplant the plant, cutting off rotten roots, otherwise, the ficus can not be saved. Pay attention to this point, because the wrong watering - the error of all owners of a flower garden. Incorrect conditions created for the maintenance of the ficus can also lead to a number of problems. If the ficus constantly "freezes" and is in the dark, then soon you will notice how gradually the leaves fall from the tree. This applies to all subspecies - the ficus of Benjamin, the rubber-bearing, lyre-shaped and others. It is known that the birthplace of the ficus tree is the tropics, which is why the plants do not tolerate lack of light and drafts. It is important that in winter the temperature does not drop below eighteen degrees. Take care that the ficus is not exposed to cold and drafts. Leave all fans or appliances away from the plant. It is not necessary to place a pot of ficus and at the door. Why, you ask? Yes, simply because the door is a constant source of draft. Answering the question, why there are problems with the leaves of ficuses, it is important to remember about pests. Perhaps the insects were able to start on the tree? Carefully inspect the soil layer and foliage. Once you find the first signs of infection, treat the tree with special preparations as soon as possible. In general, the ficus is not a plant that is too often sick; then why do all these difficulties arise? Despite the strong immunity of the ficus, the infection can be entered during the process of replacing the soil or together with cuttings - that is, when performing mechanical work. So try to show maximum accuracy in working with the plant. By properly caring for the ficus, providing him with maximum comfort and creating the ideal conditions for his life, you can grow a magnificent tree with beautiful bright leaves that will live with you for more than one year.

Dieffenbachia dries: we search and eliminate the cause of the problem