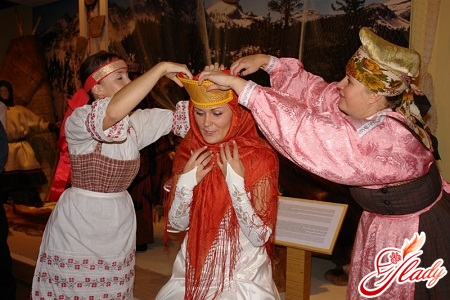 Since ancient times in the culture of different nations of the worldwedding traditions were and remain one of the brightest and most original. They exhibit ethnic and religious characteristics, traditions of a particular people. After all, the wedding day is the beginning of a new life for the young, the creation of a new family for the community of people. Unfortunately, today many wedding ceremonies and traditions in Russia are forgotten, although interest in them has recently been revived. Ancient chronicles indicate that the generally accepted wedding traditions did not exist from the beginning, different tribes had different customs. Glade, for example, was very respected for the sanctity of marriage bonds, spouses were made responsible for preserving peace in the family, mutual respect. But the Drevlyans and the northerners could simply kidnap a girl they liked in their own or another tribe and live with her without any rites, and in a polygamous marriage. The gradual unification of tribes into a single state brought together their traditions, including the wedding traditions. Until the baptism of Rus, all spheres of life of the ancient Slavs were impregnated with paganism, and wedding ceremonies were no exception: pagan gods begged for a new family, danced around the fires, and poured water. With the baptism of Rus, new customs began to emerge, which significantly affected the order of the wedding, but for many centuries, right up to our days, echoes of paganism are still audible in Russian rituals and traditions. There was a merger of two beliefs, which created a peculiar, characteristic only for Russia, culture. The main change in the rite of marriage was the need for consecration of marriage by the church. In other respects, the wedding wore a former character: mass festivities, entertainment, "feast of a mountain," which often lasted 3-4 days. By the XVI century in Russia, the order of wedding ceremony was established, which clearly regulated the role of each of its participants, wedding clothes, wedding stages and even meals served on the table. Wedding Russian rituals were religious and magical actions designed to give the new family health, prosperity, harmony in relationships, children. In addition, one of the main tasks of this ritual was to protect the young couple from evil eye and spoilage, as it was believed that on this day it is the most vulnerable. To protect the newlyweds were called as people, so are wedding attributes. So, the veil of the bride was to hide her from evil spirits. The groom's friend and bridesmaid must constantly be with them to "confuse" the spirits. Wedding ceremonies of widowed people have already taken place in a more simplified manner. Traditionally, the most suitable for the wedding time in Russia were autumn and winter. It was a time free from agricultural work. In the spring and summer were only marriages due to circumstances, for example, the bride's pregnancy, and in May marriages were almost never concluded. In addition, there were not so many suitable days for the wedding: the wedding was forbidden in fasting, on Pancake week, Easter Sedmica, Christmas tree, on the eve of Orthodox twelve feasts, and on the eve of Wednesday, Friday and Sunday, the day preceding the patronal feasts of that temple, in which was planned to perform the Sacrament of the wedding. 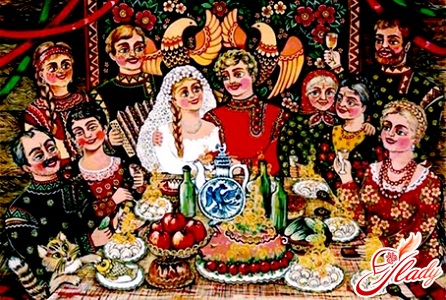 Prepared for marriage from the first years of life: girls were learning how to farm, preparing a dowry. The wedding ceremony in Russia obliged the bride to present each groom's relative on the wedding day with a towel, the groom an embroidered shirt and pants, and his mother three shirts, a cut on a sarafan, a headscarf. The brides were chosen on the bride-show, which was arranged during the spring-summer festivities or patronal feasts. The bride's parents chose the groom's parents, agreeing on the choice with all relatives, the guy's opinions were usually not asked. Without the blessing of parents, marriages were extremely rare, considered unhappy and condemned by the public. Since girls usually did not have the right to choose, they often resorted to fortune telling, trying to predict what their fate would be, when the wedding would be. They often wondered at the Christmas Eve or on the Feast of the Day, for dreams, mirrors, reflection in the water, candles. Returning to the Russian wedding ceremony, let's say that after the groom's relatives agreed on the candidacy of the bride, they chose a mediator, a matchmaker or matchmaker, nimble fellow who knew how to settle such matters.

Day, time and way matchmakers, kept a secret. The ceremony of matchmaking was furnished with many magical acts. Negotiations were conducted either with the father of the bride, or with her older brother or mother. At the second, "official" matchmaking, the bride's parents were already waiting for matchmakers and preparing a table, lighting candles and lamps. If the parents of the bride agreed to the marriage of their daughter, a marriage contract was drawn up - a "row entry", stipulating the whole range of issues related to the marriage. The bride gave the groom a bail, - a handkerchief that had great legal force. A few days later, the bride's father or her elder brother came to the groom's house to inspect his farm. If the parents of the bride were satisfied with the examination of the groom's farm, they invited his parents to a bride's bride's. For the girl, this was the first wedding test. She was dressed, a veil was thrown over her face. Svia started her conversation with her, often the girl was forced to demonstrate her skills, forced to walk, checking whether she was limping, the groom's father could look at her face. If he kissed the girl on both cheeks, it was a sign that the girl liked. In this case, the show ended with a feast drunk. Soon, arranged a conspiracy, during which the compilation of a row recording was completed, and the terms of the wedding were fixed. The conspiracy was valid, it ended with a rite of hand-to-hand: the fathers of the young beat hand in hand, then handed their hands, wrapped handkerchiefs, hands to each other, and then exchanged a business handshake. Then they exchanged pies, hugging each other with wishes: "If you are my matchmaker and my new kin."

The rite was followed by a ceremony of betrothal (ormantis), at this time the young three kissed, then exchanged rings. The betrothal was backed up by drinking or drinking, a joint feast. The bride at that time handed out gifts to her future relatives (towels, shirts, towels), treated guests to wine, bowing to them to the ground. After the collusion, the bride called herself a "crook". From that moment she did not leave the house, lamented her maiden life. The groom, on the contrary, did not sit at home, every day he visited the bride's house with gifts. The evening before the wedding was called "hen party", the bride said goodbye to her family, maiden's life, freedom. There were her lamentations and sad songs of girlfriends. At the same time, the ritual of the maiden spit was performed. Woven earlier in the braid tape girl gave girlfriends. With the wailing of her friends accompanied her to the bathhouse, where she was hugged by brooms sent by the bridegroom. 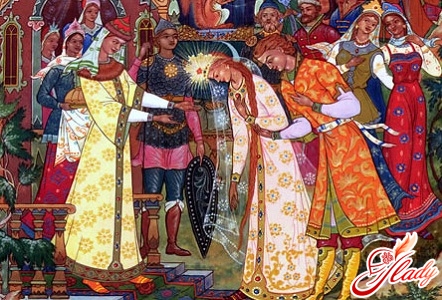 In the olden days a wedding ceremony, which usuallyspent the evening, called the Court of God. In the morning the bridesmaids equipped the culprit of the celebration: they washed, dressed, and hung ornaments. In the water for washing silver was put. After that, the bride was seated under the icons, sang her wedding songs. Then, when everything was ready for the bridegroom's arrival, the bride on her head was entrusted with the symbol of maidenhood - a crown and ceremoniously brought out two matchmakers. Women danced ahead, followed by caravans, then candles with a massive wedding candle. Then they carried the wedding rings. The guests seated themselves at the table, and the matchmaker asked the parents for the blessing of the bride to twist and scratch, then took off her veil and crown, combed her bride in honey, twisted her hair and put on a kiku, and then covered the bride with a veil. During this ritual, candles held a piece of cloth between the bride and groom. The feast continued. After the third dish, the matchmaker asked the parents for blessings, and the young were taken to church. The guests got up, the bride's parents kept an image in their hands. The newlyweds bowed to the priest, the bride's parents passed her to the groom. My father hit his bride with a whip. ordering me to obey my husband, and I gave this bride to the bride. After the wedding, the veil was removed from the bride. The whole wedding ceremony was accompanied by a mass of people who had taken shape in the people for centuries: whoever holds a candle above, who will first step to the analog, etc. When leaving the church, the newlyweds were showered with seeds of hemp and flax. The groom's parents met them at the outskirts or the gates of the house, the father-in-law with the icon, and the mother-in-law with bread and salt. Bread broke over the newlyweds for 2 halves. The young bowed to their parents at their feet, and they blessed them. The couple made three rounds around the wedding table, then the wedding feast began.

Young at the wedding table did not eat anything, notThey drank, but only accepted congratulations. When the third dish was taken to the table, the young people were taken to the hay box, to the mating box. With the departure of the newlyweds, the feast burned, - covered the "mountain" table, which was usually approached by guests from the bride's side. During the night the young couple were unceremoniously taken out of bed several times, taken to the guests who did not stop the fun. Early in the morning, the young woke again. They were dressed and escorted to the table, where the fun continued. True, it was already, as we now say, a "sweet table". A little later, since the drunken guests were no longer young, those who had not slept and tired could quietly leave the feast and leave to rest. On the same day the young were preparing a ritual bath. Wash them off with songs, scattering the road brooms. In the bathhouse, the matchmaker checked the bridal shirt to reveal traces of virginity. Often the fact of innocence was demonstrated to young villagers. On the third day of the wedding, the young were put to the test - she had to show her skills to the female worker and the hostess. The young wife drowned the stove, chalked the floors, cooked dinner, and the guests had to interfere with it in every possible way. Traditionally, the Russian wedding lasted three days. We advise you to read:

Gift to the husband on the anniversary of the wedding: certificate, tour

Corporate Holidays: all the nuances of preparation

What to give a guy on Valentine's Day: be original!

What to give for the anniversary of a man: the rules for choosing a decent gift

How to decorate a wedding car with your own hands?

A pirate party: a holiday scenario