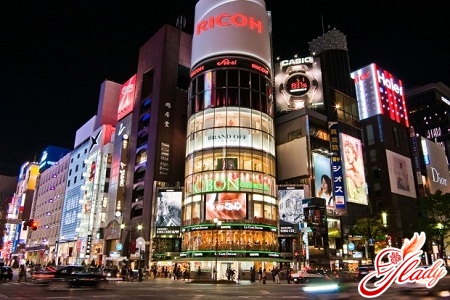 The capital of Japan is quite a young city,whose age is 400 years. During this time he was repeatedly subjected to wars, earthquakes, fires, changed his name and appearance. To date, Tokyo is a modern metropolis that has spread to the neighboring cities of Yokohama and Kawasaki. The capital of Japan is a city of contrasts that combines eastern and European culture, modern skyscrapers and ancient temples. Sights of Tokyo are known to tourists around the world. The most famous of them are: 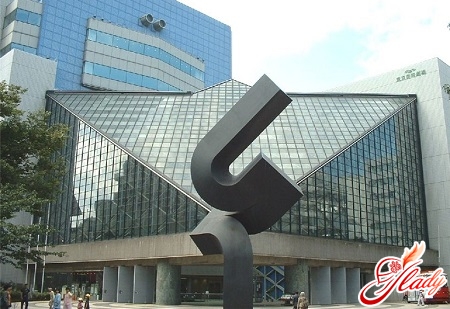 Tokyo is the heart of Japanese culture

To the sights of the capital of Japan, which are worth seeing in order to get an idea of ​​the culture of the country, include:

The most famous sights of Tokyois also the man-made island of Odaiba, which is located in the Tokyo Bay. A fascinating journey along the Sumidagawa River from the Buddhist temple of Asakus ends here. On the island there are exhibition halls of such famous Japanese manufacturers as Panasonic and Toyota. Views of the night Tokyo are striking in its picturesqueness, and the Tokyo Bay, decorated with floating boat-restaurants and lit by flashlights, looks from the island just fine. 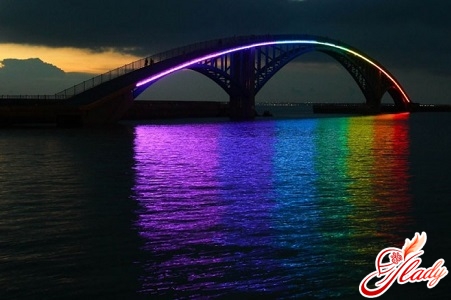 Ginza area - the focus of trade in Tokyo

The best restaurants of the Japanese capital andfashionable shops are located in the Ginza area. Visiting it, you can pay tribute to the restaurants of Japanese cuisine, which are also included in the list of attractions of the city. Tourists should visit the largest market in Tokyo - the Tsukiji market. The market is the largest in Tokyo trade in vegetables and fish. If you have a special endurance, then it is worth to visit the auctions for the sale of tuna, which start at 5 am, and at 6 o'clock you can visit the sushi bar, in which you will cook sushi from the fish just bought on the market. Before you visit the market on your own, you must certainly get acquainted with his card, as finding a place for bargaining is not so simple. You need to familiarize yourself with the rules of visiting the market by tourists.

"Sights of the second day"

Tokyo is famous for not only its main attractions, but also the so-called "second day attractions". They include:

To the entertainment attractions of TokyoDisneyland, which is a thematic park and covers an area of ​​more than 47 hectares. To the favorite entertainment of tourists from all over the world is visiting a tea ceremony, which introduces the spirit of Japan. If you want to immerse yourself in your inner sensations and experience harmony, then you should dine for geisha playing, attend a shiatsu massage session, learn lessons on samurai sword, or walk in Tokyo in a kimono that can be rented. If you are striving for gastronomic pleasures, then it is worth to attend an event such as Kayseki's dinner. All food here is served in small portions in a unique ceramic pottery, and the ceremony takes place in a separate room, from which a beautiful view of the inner garden opens. Dinner Kaiseki allows you to fully focus on the taste sensations. In addition to the classic land, loved by the inhabitants of different corners of the planet, in Tokyo you can try and delicacies such as sushi "o-toro" and sushi from the whale. Sushi "o-tiro" is sushi, made from tuna. One small piece will cost 6-8 dollars, and the whole tuna is sold at Tsukiji market for about 20 thousand dollars. If you want to touch the life of the average Japanese citizen, then you can visit such a Tokyo landmark as onsen. Onsen are public baths, which offer their visitors to immerse themselves in a hot bath with mineral water. In the bath you can also experience such types of spa treatments as sand baths, massage, peeling with fish Garra Rufa and various beauty treatments. Onsen visitors are offered a variety of traditional Japanese dishes and drinks. In order to see all the sights of Tokyo, you need at least four days. On the first day, it is best to visit a sightseeing tour around the capital of Japan. It is conducted in English. On the second day, inspect the places that are on the list of "second day attractions". The third day should be planned in such a way as to visit the sale of tuna in the Tsukiji market, and also to touch the culture of Japan. You can do it in several ways: visiting a traditional tea ceremony or getting acquainted with the traditions of fearless Japanese samurai. The fourth day should be dedicated to unique cosmetic and spa procedures, which bring unspeakable pleasure. These Tokyo attractions will surely please the beautiful half of humanity and surprise the men. On this day, you should go to a shiatsu massage session or visit onsen. Gastronomy should also be taken into account. Japanese cuisine is able to surprise even the tourist who has seen the species, and sushi from the whale or sushi "o-toro" can be tried only in Japan.

Crete: sights and myths of the island

Southern Europe: a paradise for tourists

Locks of the Loire: an independent journey to the residence of kings and beauties