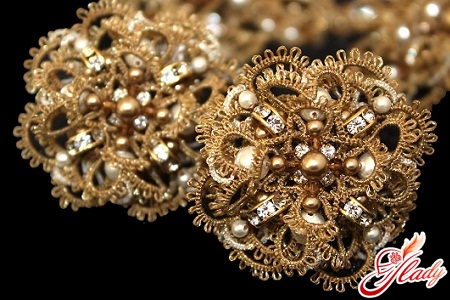 Frivolite - a special technique of lacework. It is also called a knot, shuttle or French lace. Why knotted? Because the products in the technique of frivolity are performed with the help of nodules tied in various ways. Why shuttle? Because the main tool of frivolity is a special shuttle. Why French? Because the name of this technique came to us from France. It is believed that frivolity - this is the easiest way to make lace handmade, since it requires a minimum number of tools and material costs. What is this technique of fine needlework? Where can it be used and is it difficult to learn? Let's learn more about all this.

This technique of lace is very old. So ancient that researchers still can not accurately name the homeland of this needlework. Only in one they do not have disagreements - frivolity appeared in the East, and only then it got to Europe. In the East, this lace was called "makuk" (shuttle), in Italy - "okko" (peephole), in England - "tethering" (wicker lace), literal translation from German "shiffhen shpitzen" also meant "weaving by the shuttle", and in France, this kind of lace was called "frivolity" (light-minded). In our language, the art of weaving shuttle laces was established precisely under this name. Casual and uninhibited technique did not become a kind of folk craft, like, for example, bobbin laces, but it was popular and widespread female needlework. The peak of its popularity came in the eighteenth century, when from simple coarse threads it was first produced a delicate finish for curtains and outerwear, and then handbags, hats, umbrellas, gloves and other items of fashionable wardrobe of society ladies. Very common was this kind of needlework and in pre-revolutionary Rossi. But after October 17, shuttle lacework (like much more) was declared a survival of the bourgeois past and began to be considered an occupation unworthy of a "liberated" woman. And only half a century later the revival of frivolity began first in the countries of the Soviet Baltic (after all, they are closer to Europe!), And then in other parts of the USSR.

At the heart of this technique of lace is a knot,tied with a special shuttle. Finished products made in the technique of frivolity - this is a whole system of tightly tied knots. The technique itself is quite simple to master and is available to experienced craftsmen and beginner needlewomen. To start learning, you only need two shuttle, and then you can use different shuttles for threads of different thickness and texture. The shuttle for the frivolite can have different sizes and various designs. They are made of wood, plastic, bone, metal and plexiglas. Shuttles can be purchased in handicraft shops or even made independently, for example, from scraps of a plastic bottle and a bobbin from a sewing machine. In addition to shuttles for the manufacture of French lace will need the following tools:

For French lace will suit a variety ofthreads: cotton, linen, silk, synthetic. The main qualities of a thread for such a lace are its good twisting, strength and high degree of slip. For the implementation of lace napkins and clothing elements use cotton and linen threads, and for jewelry - synthetic. So, for example, when weave tatters with beads or beads, then take a nylon thread. All the variety of patterns and elements of the shuttle lace is based only on one, the main node, which is called the "frivolite knot" and consists of two symmetrical parts. This node can be direct and reverse. It is from the direct and reverse node that the basic elements of the shuttle lace are executed: a ring, an arc, a pico. Moreover, the ring can also be a semicircle, a combined ring, a ring in the ring. In this technique, the simplest connections of individual elements are used: straight coupling and reverse coupling. 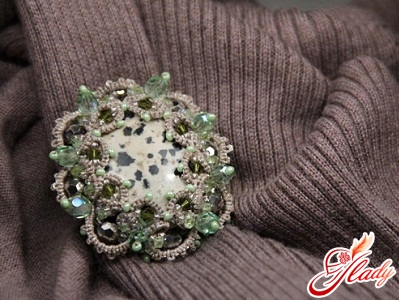 With their skillful pens with a minimum set oftools masters frivolite works wonders. The products made in this technique are so diverse and elegant that you simply marvel at it. In addition to openwork napkins, collars, hats and gloves in the technique of knot lace making jewelry, and individual motifs are used in decorative panels and paintings. This lace is decorated with tablecloths and bedspreads, exclusive bed linens, wedding dresses and designer clothes. French lace is combined with unexpected materials such as metal, leather and stone. On the technology of shuttle lacework, a new hand-made technique "Ankars" is based, in addition to knot lace, beadwork techniques and macrame are used. Another nice point in the possibilities of knotted lace is that the frivolite can be weaved not only with the help of a shuttle. A fine alternative to the shuttle lace can be a frivolous crochet or on the fingers. You can master all these techniques of making knot laces not only on special courses, but also on your own. Use the shuttle lace master classes, watch the video tutorials, or purchase special manuals. Find the schemes and descriptions of the work and forward - to conquer such a forgotten and such elegant handicraft. After all, it is known that everything new is a well-forgotten old. A frivolite (almost forgotten art of weaving French lace), revived in our time, once again confirmed this truism. We advise you to read:

Ribbon bracelets with their own hands: a way of weaving

Leather bracelets with their own hands: leather masterpieces

Home slippers with their own hands: how to sew them?

Pillows with their own hands is easy to make

Christmas fortune-telling: how to know your destiny