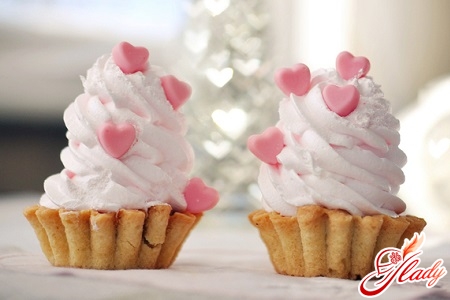 The recipe for sour cream is very popular inhome cooking, although it is ideal for almost any confectionery. With sour cream you can make a biscuit, sand or honey cake, brewed cakes and even soufflé. This cream is distinguished by a magnificent structure, a gentle consistency and sour taste. In most cases, the housewives use the recipe for a traditional cream of sour cream, although there are not so many options. For example, for a layer of cakes and pastries, you can prepare a liquid sour cream or a thick cream of sour cream and cottage cheese. To make a filling for eclairs, it is better to use a creamy version of sour cream, and the most suitable material for decorating the cake will be sour cream with the addition of oil. However, any recipe sour cream is completely accessible. So let's find out how to prepare a traditional cream, as well as various versions of this confectionery invention.

Classic recipe sour cream for cake onthe first look is incredibly simple. Of course, by the number of ingredients this recipe can really win any contest of minimalist culinary ideas. However, not everything is as easy as it seems. To make a really splendid sour cream is not possible for everyone. But we will try. Ingredients:

Preparation: The key to success in preparing lush sour cream is very fresh fatty sour cream. And it is sour cream, and not sour cream, as the producers of ersatz-sour cream call it. So, naturalness is the first condition. The second condition is the fat content of sour cream, which should not be lower than 30%. Of no small importance is the quality of sugar. It is believed that with small sugar sour cream is easier to whip. Some generally recommend using sugar instead of sugar. Now about the ratio of sugar and sour cream. Traditionally, this ratio is two to one. That is, two parts of sour cream are taken one part of sugar. But lovers of sweet desserts are not forbidden to increase the amount of sugar - the quality of the cream from this will not be greatly affected, only the taste will change. And the last necessary condition for a tasty lush cream is the temperature of sour cream. The fact is that for a cream it is necessary to take only strongly chilled sour cream. Well, now the process of preparation. We put in a bowl of sour cream (natural, thick, fatty, chilled), pour out sugar and vanilla sugar. Whisk everything at a high speed mixer to the splendor. There is also a more reliable way of preparing sour cream. First, before the splendor, whip the sour cream at low speed mixer, and then increase the speed and gradually, one tablespoon add all the sugar. Believe me, if you follow all of the above conditions, your sour cream will necessarily turn out to be thick and lush. 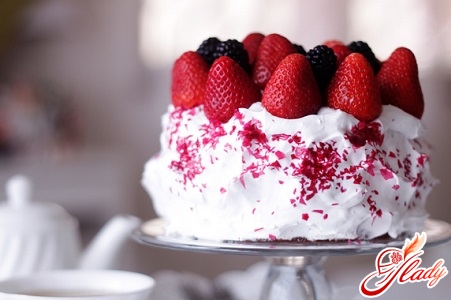 As you know, this recipe is differentthe presence in the cream is not only sour cream, but also cream. Such cream cream will have a lighter texture and a less pronounced sour taste. Ingredients:

Preparation: In advance we cool sour cream and cream - they should be the same temperature. Now proceed to the whipping procedure. Pour into a saucepan or a bowl of cream, add the same sour cream and put the pan in ice water or even in crushed ice. Begin to beat the creamy-sour mixture with a whisk or at a low speed of the mixer until a lush and thick foam is obtained. Then, whilst continuing to beat, gradually add the sifted sugar powder and vanilla sugar. Creamy version of sour cream will be an excellent filling for brewed cakes, and even it can be used to decorate a cake.

This is a recipe for sour cream with gelatin. It turns out to be dense and can be used for decorating cakes and pastries. And still such cream-souffle can be prepared as an independent dessert. Ingredients:

Preparation: Just this recipe allows the use of not very greasy and not very thick sour cream. Gelatin is the thickener here. It must be pre-soaked in a small amount of water (about half a glass) and left for swelling. Swell the gelatin in a water bath or in a microwave and let it cool down a little. While gelatin is cooling down, we will sour cream with powdered sugar and vanillin, and now, whilst continuing to beat, we will pour gelatin. If you are making such a cream for cake, then use a split form. Place the cake in it, and pour the cream on top and remove the form in the refrigerator. So you will get a cake with a layer of sour cream-souffle. If you need a thick cake to decoratecream, this recipe is quite suitable. Sour cream with the addition of oil keeps the shape well, but it does not lose the splendor and lightness inherent in the traditional sour cream. Ingredients:

Preparation: All ingredients for this cream are taken in equal quantities, for example, one glass. For its preparation we mix in a saucepan milk, sour cream and butter. Important! All these products should not be cold. Therefore, remove them from the refrigerator beforehand so that they warm up to room temperature. So, mix the milk with sour cream and butter and lightly beat. Then add the powdered sugar and whisk already at high speed to the splendor. At the end of whipping, you can add to the cream any flavor - vanillin, rum or fruit essence, cognac or liquor.

Other variants of sour cream

Taking as a basis the recipe of traditional sour creamcream, you can prepare it in different versions. If you add cocoa powder in the whipping process, you will get a chocolate cream. Adding coffee, you, respectively, make a coffee cream. If you combine sour cream with cottage cheese, then it will be sour cream cheese cream. And sour cream in combination with boiled condensed milk is a sour cream creme brulee. And still very tasty it turns out sour cream with fruits and berries. Raspberries, strawberries, peaches, blueberries, cherries, apple purees - all this can be used for light and delicious sour cream. Try and do not be afraid to experiment. Prepare with pleasure and pleasant appetite to you! We advise you to read:

The recipe for royal glaze