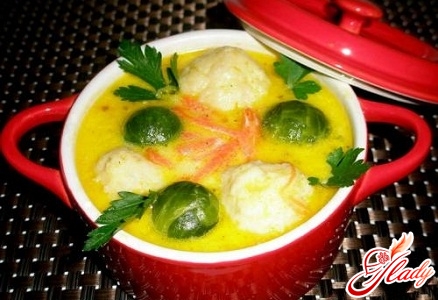 Charming little kochanchiki brusselscabbage causes conflicting feelings. On the one hand, it seems that what you prepare from such a miniature copy of cabbage, and on the other hand - they are so good externally that they make culinary fantasy work. From Brussels sprouts are obtained delicious first courses. It is perfectly combined with other vegetables and can be a part of minestrone - a thick vegetable soup.

Soup with lentils and Brussels sprouts

Lentils in Europe have long been consideredmedicinal plant and treated with great respect. It is a good complement to Brussels sprouts and as a result you get a wonderful rich soup. Ingredients:

Cooking method: Finely chopped onions and carrots fry in vegetable oil. In a saucepan pour 1.5 -2 liters of cold water and put fried onions, carrots and washed lentils. Allow it to boil for ten minutes and add Brussels sprouts. If it was frozen, do not defrost it. Peeled tomatoes are finely chopped and put together with cabbage. All cook for another 15-20 minutes on a small fire until ready. At the end of cooking, salt and pepper to taste. Greens are put in a bowl before serving.

This is a recipe for tender soup, pure, surprisingly fragrant and beautiful externally. It will be very good for a festive dinner, when it is supposed to serve the first dish. Ingredients:

The quantity of products is calculated on 4 portionsPreparation: Cabbage is washed under running water. Separate from all the heads of 24 external leaves to decorate the soup. These leaves blanch in hot salted water for about 5 minutes, then lower them into a cold one. This must be done so that they cook and at the same time retain their shape. On vegetable oil or fat from a ham, pre-chop the shallow onions until transparent. It is important not to overcook the onion and not bring it from the golden crust, otherwise it will spoil the color of the soup-mashed potatoes. Add the chopped Brussels sprouts to the onions and fry for 3 minutes, stirring. Vegetables salt, pepper, season with nutmeg and put in broth, which should be put on fire. Soup is cooked on low heat for about 20 minutes. Then everything is poured into a blender and brought to the state of the cream, you can use the sieve for the same purposes. In mashed potatoes add milk and everything is brought to a boil. While the soup is boiling, whip the cream. They are introduced after the soup was removed from the plate. After that, you can pour the soup-puree on serving plates. In the middle of each they put an egg, cut by rings, around which cabbage leaves are laid out. In this form, the soup is served to the table.

Soup with rice and Brussels sprouts

This is a light summer soup - low-calorie andvitamin. To cabbage is not boiled outside and is not left moist inside, by the time of cooking it is specially prepared. First it is necessary to wash it, remove excess leaves, slightly cut the head of tail, and make a cut crosswise from the side of the stump. Then the cabbage cooks evenly and in the soup will remain whole and attractive. Ingredients:

Cooking method: Tomatoes must be peeled. To do this, they are washed and lowered for only 30 seconds into boiling water. After that, they are transferred to cold water, then cleaned and cut into small cubes. Squash is washed and also cut into small cubes, so do with celery. Onions are cleaned and finely chopped, carrots are cleaned and cut into small strips. In a large saucepan pour the vegetable oil 3-4 tablespoons, warm it and put the onions first. It is fried about three minutes before the transparency, then add zucchini, carrots and celery and fry for about 7 minutes over medium heat. Then put the tomatoes in the soup and simmer for about 5 minutes, then pour in the broth and boil for 7 minutes. Rice cook separately and in semi-finished form put in soup with Brussels sprouts and green peas. At this point, the soup is salted, peppered and boiled for another 10 minutes. Ready soup is poured into plates and decorated with a leaf of basil. We advise you to read: