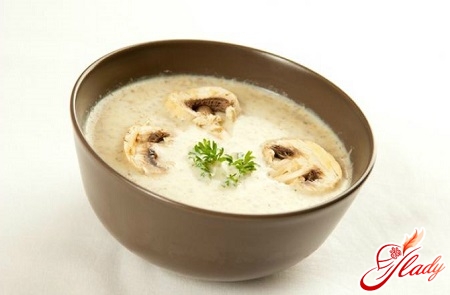 Mashed soups are very popular amongrepresentatives of almost all age groups. Children like them, because they do not look like other soups, forcing them is very difficult. Those who cook this dish, soup-puree allows you to mix a variety of products, as the recipe is not at all complicated. Well and one more feature of such soup is that it is very gentle and easily digested. But it should be remembered that this soup should not be eaten with soft bread, but with dried crackers or toast. A set of products for this dish can be absolutely anything. So, you can make mashed potato soup or from pumpkin, zucchini and other products containing starch. In any case, this requires meat or vegetable broth. As the ingredients that make up the bulk (puree), you use all kinds of cereals, starchy vegetables, meat. Grind them with a blender or an ordinary meat grinder. For soup-mashed potatoes, a tool such as a tolk for regular mashed potatoes is also suitable. 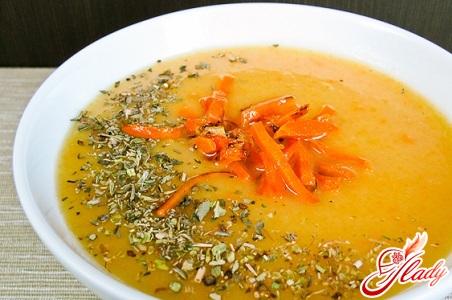 So, in order to choose one or another recipe,you, first, need to decide on what kind of soup purée you are going to cook. So, you can cook meat, fish, mushroom or even vegetarian soup. In any case, it is possible to cook soup-mashed potatoes from broth, which is formed as a result of a decoction of meat, fish or vegetables. When the crushed ingredients are sent to the pan, they can settle on the bottom and burn. To prevent this from happening, it is necessary to stir constantly the cream soup until the vegetable and meat mass dissolves completely in water until the consistency of the puree. Another option may be the use of a diffuser when cooking, which will prevent burning of products even if they settle on the bottom of the pan. Well, experienced chefs and cooks are advised to add to the mass when frying a few spoons of flour. With its help, mashed potatoes will never sink, but will be evenly distributed in the broth. In order to potato soup puree soup was more nutritious, it can be added to the supply of some untreated vegetables or toast. And during cooking, you can fill the soup with egg-milk mass. It is prepared very simply. To do this, you need 3 whipped egg yolks, a little more than half a glass of milk. All this is mixed and filtered through a sieve. Gradually, the dressing is poured into soup. This dish is not advised to warm up too often. Therefore, if you are not going to eat it immediately after preparation, place it in a pot of water and leave it on a water bath. This will prevent the soup from cooling down, and at the same time it will not maintain a constant temperature. This should be done in all other points when warming up is required. 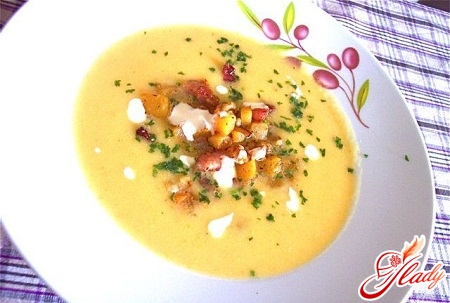 Potato soup and its preparation

This dish belongs to the European cuisine. In order to cook it, you will need only 40 minutes. So, the soup-puree has the following composition:

First as follows, rinse the potatoes, cleanhim. If you cook soup puree from fresh potatoes in summer, then you can remove the peel not very thick. If cooking refers to the autumn, winter or spring season, when the potatoes are no longer fresh, the purification should be thicker. After that, you can immediately cut the potatoes into cubes (like a regular soup) and pour water to ensure that the starchy potatoes do not darken. We clean the onions (it is better to take the usual, not the feather and not the salad) and cut it with thin rings, if the bulb is small, or half-rings if the bulbs are large. For such soup-puree you will need a pan with a volume of at least 2 liters. In it we pour a few spoons of vegetable oil and reheat the frying pan. After the oil starts to boil, we dip the chopped onion into it and fry it before it becomes transparent. After that, go back to the potatoes. It must be filled with cold boiled water. For 900 g of potatoes we need about 900 ml of water. Cook the potatoes until ready (about 20-25 minutes after boiling). At this time, you can clean the garlic. My teeth and, if they are large, they should be cut into 2-3 parts. If the garlic is small, then it is fried whole. Fry it not in the same oil as the onion, but in a separate bowl, with melted butter. Unlike onions, garlic is fried until golden. Once everything is done and the potatoes are already soft, we add the garlic directly to that pot in which the potatoes are still brewed. After that, we remove the pan from the gas stove and let the future soup cool down a little. This is necessary in order for the blender to function normally. Grind potatoes with garlic and onions in order to evenly distribute them in a single mass. At regular intervals during the grinding process, potato broth can be gradually added to the bowl. When everything is ready, go to the final stage. All that we got, shift back into the pan, add cream, salt, pepper to taste. Bring to a boil, but do not boil. Before you serve on the table, you need to cool it a bit, add to it croutons from white bread and sprinkle with greens. This recipe is basic, as it includes the most basic products that are sure to be found in every apartment. Adding to it any ingredients, you can create your own unique recipe for soup-puree from potatoes. 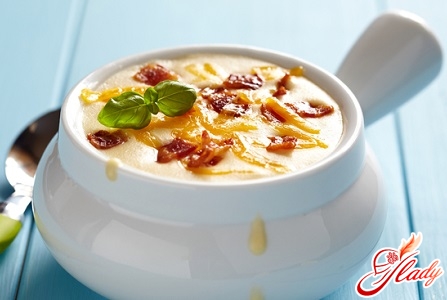 Soup puree from potato with leeks - recipe and cooking

Leek is the most commonelement for soup-puree. It not only perfectly combines with other products, but also allows you to prepare a full-fledged useful dinner. For such a soup, you need a minimum set of products:

Leek requires careful processing, beforethan to go into the pan. To begin with, we cut off the upper, green part of the onion, which is completely useless. Next, proceed to the part of it, which we will immediately prepare and then eat. This white root of leek. It is washed in several waters. To do this, it is better to follow the following recommendations. In a deep saucepan pour water and throw the onion. Rinse it properly, discarded in a colander. In a saucepan, change the water and rinse the onions again. So it is necessary to repeat until until on the bow there is not a single dirty place left. After all, this is the root that was in the soil, and nobody will want to feel the taste of sand during the meal. We cut the washed leeks - first along the bulb cut it in half, and then cut it across with thin half rings. In a deep saucepan, melt the butter, add vegetable (or olive) to it and mix it. We send a leek to the heated mixture. This recipe means cooking only in oil, but you can first boil it in water. Onion is brewed in oil about 8-10 minutes before it becomes soft. In the future, we turn to potato processing. First it, like the leek, mine, then clean and cut into cubes. Once the onion is ready, pour the potatoes into it and add a little salt and pepper to the resulting mass. It is better not to zealous in this matter, because each of them then himself can add the necessary spices. Tightly close the saucepan, add gas to full capacity and bring to a boil. Then we reduce the gas, otherwise all the contents will "run away," and at this capacity we finish the soup. This will take no more than 15-20 minutes. Ready soup must be crushed. To do this, you may need a blender. If it does not exist, you can use a meat grinder, but in this case you will need to twist the vegetables several times. If there is a blender, then it should not be overloaded. To do this, you can grind the boiled vegetables in several receptions. Again, the finished mashed potatoes are poured into a saucepan, add the necessary amount of milk (but do not abuse it, and then the soup will turn out to be liquid), sprinkle with herbs and serve it on the table with croutons or pies.

It is completely inexplicable thatthe recipe of this dish was called "in Japanese". Nothing exotic and original preparation of such soup does not imply. It can be cooked in a hurry, when there is not enough time or when there is almost nothing left in the refrigerator. This soup recipe is radically different from everyone else: the thing is that you do not need any broth at all for its preparation. As the main mass is the mashed potatoes. The recipe for its preparation is very simple. Washed and peeled potatoes are cut into large cubes and boiled, slightly salted. In order to calculate how much potatoes you need, you need to start from the amount of potatoes per serving. This is approximately 150-200 grams. So, as already mentioned, broth in this soup in its traditional form will not be. Here its place will be taken by white sauce (in which we just need to add broth) and boiled cream. For a family dinner, you need about 1 kg of white sauce. It includes:

First, fry the flour in a heated frying pan. After it acquires a golden hue, we pour in the broth and mix it thoroughly until a homogeneous mass forms. Onions and other greens finely chopped, add to the broth and cook for about half an hour. Finally, pour in the lemon juice, add a piece of butter and filter. Welded potatoes mnm tolokushkoy, pour in puree sauce with boiled cream, butter. Do not serve soup puree very hot. Give him some brewing, then pour the soup-puree on plates and sprinkle with greens from above (but you can also chopped garlic). Serve, as usual, with toast or croutons.