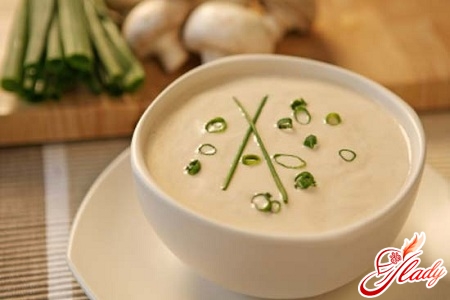 If such a concept as a "culinary fashion" for younot an empty sound, but the recipe for cooking any soup-mashed potatoes is sure to interest you. And if you are talking about mashed potatoes with mushrooms, then you simply have to add it to your culinary treasury. Mushroom cream soup or cream soup is surely included in the menu of the most fashionable, most famous and most popular European restaurants. And Europeans know a lot about food. So try and make such a fashionable soup. And if suddenly, having prepared this soup from champignons, you will be disappointed in the vaunted European cuisine ... Well, then, consider that you have an excellent recipe for cooking mushroom sauce. So you do not lose anything.

The most popular recipe

Popular, so easy to prepare, available in composition and wonderful to taste. And if so, then it's worth getting started with mushroom soup puree from this recipe Ingredients:

Preparation: Wash the mushrooms (half a kilo) and sort them out. A few shallow mushrooms will be put aside for garnish, and the remaining mushrooms shall be finely chopped or crushed in a blender. Add the cut mushrooms to the saucepan, add to them a tablespoon of butter, one whole onion and one, cut along the carrot (washed and brushed). We will cover the stewpan with a lid and we will extinguish mushrooms with vegetables for about forty minutes. Then add a glass and water to the saucepan and again boil it all. Small mushrooms cut into halves and boil them in a separate saucepan. Take two tablespoons of flour and butter and fry the flour. Then dilute it with milk (four glasses) and boil. In the saucepan, we put the stewed mushrooms (we no longer need the onions and carrots-we remove them) and add the dairy-flour mix. Cook soup for about twenty minutes. Then rub it in puree, add a mixture of two whipped yolks and a glass of cream and boiled mushrooms. We serve soup puree hot.

The Most Vegetable Recipe

Diluting the taste of mushroom soup with the taste of vegetables(or vice versa), we can prepare a very vegetable soup puree: light (it has a low enough caloric content) for the stomach and harmless to the figure. Well, and that it will turn out also tasty, to speak unduly - it and so it is clear. Ingredients:

Preparation: Let's take three hundred grammes (approximately standard packing) of champignons, carefully wash them and boil them in salted water. And then cut into slices. All the vegetables (one carrot, two or three potatoes, a gram of two hundred cauliflower and one root of parsley) shall be finely chopped and boiled. Then, salt the broth and drizzle the vegetables in a mash. Boil the milk, put vegetable mashed potatoes and half of the mushrooms in it, salt and boil again. We serve soup puree slightly cooled, seasoned with whipped yolks and cream (one egg yolk on a glass of cream) and butter and garnished slices of mushrooms. 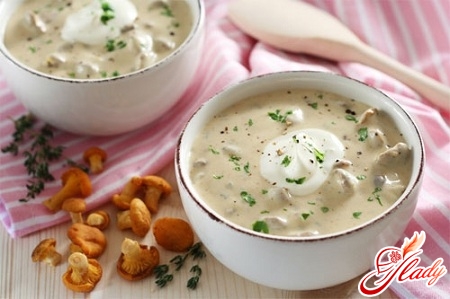 The Most Creamy Recipe

Virtually all mushroom soups are pureed in milkor add cream to them. The same recipe includes milk, cream, and butter. So it can be safely called the creamiest. True, the calorie content of such a soup will plunge into the shock of the watchful women of a slender figure. But his unusually tender taste more than compensates for the bad mood from the calculation of these same calories. Ingredients:

Preparation: Let's wash, cut and fry a pound of champignons in butter, which we need two tin spoons. A little fried we will postpone, and the others we will continue to roast, having added to them the chopped onion and the crushed clove of garlic. At the end of the frying, add a half tablespoons of flour. Pour two glasses of milk into a saucepan, boil it and add mushrooms with onion to the milk. Welded mushrooms together with milk will be thawed in a puree and diluted with a glass of fatty cream. Put the remaining mushrooms in the soup and bring it to a boil. The creamiest mushroom soup is ready.

The most fashionable recipe

Fashion, as is known, is a general phenomenon. And as soon as a new trend is announced, he immediately takes a leading position in all fashionable tops. Cooking (restaurant cuisine in particular) is no exception. Today, any trendy restaurant will offer you some cream soup. It's fashionable, you see. But for the sake of justice we note that it is delicious. So, the most fashionable recipe for soup-mashed potatoes from champignons. Ingredients:

Preparation: Let's wash the mushrooms (half a kilo) and cut them into thin plates. Let's cut one onion. In a thick-bottomed pot, pour two tablespoons of vegetable oil and fry onions on it (three to four minutes). Then add the mushrooms to the onion and fry all together for another two minutes. In another saucepan, let us dissolve a tablespoon of butter (you can take it already baked), add to it two tablespoons of flour and fry it with flour (two minutes). Then we will pour into the saucepan about half a liter of chicken broth and, gently stirring, bring it to a boil. In the last turn, we add to the soup fried with onion mushrooms. Boil the soup once more, grate it in puree (let's go through a sieve or whisk with a mixer or blender), salt and pepper to taste and cook for another five to seven minutes. At the end of the preparation for soup, you need to add a glass of cream and once again bring it to a boil. Serve the soup slightly cooled, sprinkled with walnuts and greens.

For such soups you can use not onlyFresh champignons, but also freshly frozen and even canned (but not pickled). However, it is with fresh mushrooms that soups are especially delicious and aromatic. So try your hand at learning new kitchen wisdoms, go with the culinary fashion. And cook with pleasure! We advise you to read:

Borsch in the multivarquet: recipe

How to cook borsch with beets: stages