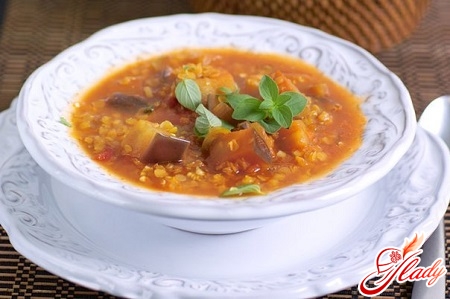 Everyone knows that in order to preserve for a long timehealth, a person needs to eat properly and fully. Dietitians constantly repeat about the benefits of vegetable dishes. However, besides the fact that dishes from vegetables are useful, they are also very tasty and varied. In the harvest season of eggplant each housewife tries to cook from them something unusual to please the home-made delicious and at the same time to improve their well-being. And not for nothing, because it is now an eggplant is considered an ordinary vegetable, which is used only in cooking, and at first, when it only appeared (more than 5 centuries ago), it was used as a medicinal plant. Useful properties of eggplant can be listed endlessly. For example, due to the fact that it normalizes the level of cholesterol in the blood, it is used to prevent hypertension, heart attacks, strokes, atherosclerosis. In addition, it is very useful for the nervous and hematopoietic systems. Recipes for cooking eggplant (blue) can be very diverse: they are fried, stewed, baked, marinated, dried. A rather interesting taste is vegetable soup with eggplant. Despite the fact that the dish does not add meat, the soup is rich and rich. And it is prepared quickly and simply.

Preparation: All vegetables are cleaned and washed. Onions cut into half rings, carrots - slices, pepper - straws. Tomatoes are scalded with boiling water, peeled from them and cut into cubes. In the pan, put the carrots, peppers and tomatoes, pour water and cook over medium heat until cooked. In a frying pan, warm vegetable oil, lightly fry the onion, add finely chopped garlic and diced eggplant. Fry until the eggplant is ready. Then, from the pot with vegetables, the broth is poured into a separate bowl. Vegetables are combined with fried eggplants, garlic and onions and ground in a blender. Pepper and salt are added to the resulting mass. After a lot of diluted with a fused vegetable broth to the required consistency. Greens are finely chopped and added to the prepared soup. 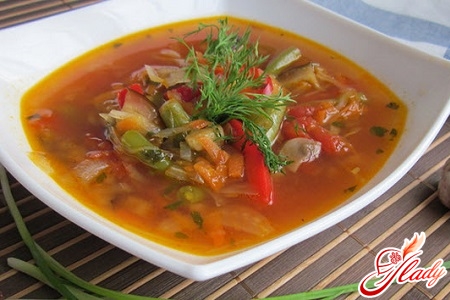 Cooking method: Grilled frying pan is heated and sprinkled with vegetable oil. Three blue cut into halves and fry for 15 minutes on both sides. If in places they start to burn a little, it's okay. The secret of this recipe is just a smoky, slightly bitter taste. Next, the skins are removed from the fried eggplant. Flesh is put in a pan with boiling chicken broth. Cook for about 10 minutes. The remaining eggplant is cut into small cubes and fried. Then add it to the pan with broth. There also put salt, black pepper and cook for another 5 minutes. Then the pan is removed from the fire, cream is added, lemon juice and chopped parsley. Ready soup is ground in a blender and served to the table.

Recipe for miso soup with eggplant and mushrooms

This recipe refers to Japanese cuisine. However, at present, many of our compatriots prefer Japanese cuisine. The main thing in this recipe is to prepare the broth correctly. So, in order to prepare the necessary amount of universal dashi broth, a glass of cold water is poured into a saucepan, the plate is put in a kombu and brought to a boil. After boiling, the algae from the water is immediately removed, otherwise the taste will be too full. The combo can be dried and used again later. Then the broth is salted to taste and the powder "Bonito" is added. Cook for 2 minutes. Then the broth is removed from the fire, covered with a lid and insisted for 15 minutes. After that, it is filtered through gauze or a fine sieve to get rid of the remains of fish flakes from the powder "Bonito". Next, the oven is heated grill. Eggplants cut into slices, mushrooms - into 4 parts. Spread the eggplant and mushrooms on a baking sheet and sent to the oven for 10 minutes. After 5 minutes they will need to be turned over. Baked eggplant slices are cut into 4 parts. In a saucepan mix eggplant, broth and mushrooms. Bring to a boil and remove from heat. In a small bowl mix miso paste and a few spoonfuls of broth. A well-mixed mass is added to the soup. Boil after this is not necessary, because the paste after boiling is not very pleasant to the taste. When serving in the soup, add finely chopped green onions. 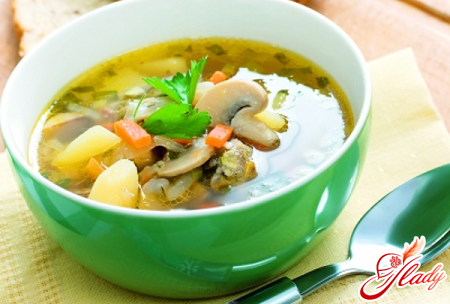 Cooking method: Wheat flour is mixed with salt. Eggplants are peeled, cut into slices and rolled in a mixture of flour and salt, fried in vegetable oil. Eggs are lightly beaten with a fork or a mixer and they are filled with fried eggplants. Mass bake in the oven for about 10 minutes. After cooling and cut into strips. The water is boiled, cooled and mixed with kefir. To the resulting mixture add garlic, finely chopped parsley and sticks of fried eggplant.

A recipe for eggplant soup with potatoes

Cooking method: First, heat the frying pan and fry the onion on half the olive oil. Sinenkie and potatoes cut into cubes, tomatoes - large slices, carrot tinder on an average grater. When the onion is slightly fried, add the grated carrot. Fry for 3-4 minutes, and then add eggplant and garlic. In the other frying pan pour the remaining olive oil and fry tomatoes in it. Broth is brought to a boil, put the potatoes, fried eggplants, carrots, onions. Add salt, spices. Brew until the potatoes are ready. 2 minutes before cooking, roasted tomatoes are carefully added to the soup.

Cheese soup: how to cook?