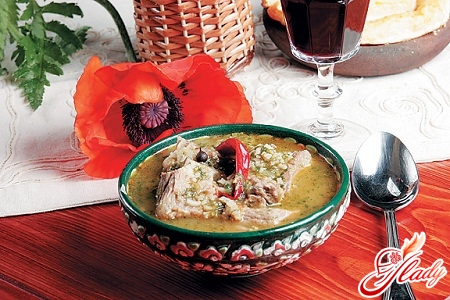 Harcho is a Georgian thick soup, the basiswhich are beef and rice, it is brewed with tomatoes and spicy seasonings. There are several options for cooking soup harcho. We will tell you about the most basic recipes.

Cooking method: Beef washed and cut into small pieces. Cut the meat into a saucepan, pour cold water and cook until half cooked. Finely chop the onion and then fry in a pan with vegetable oil. After the onion becomes golden, add the tomato paste, stir and simmer for 5 minutes. The resulting roast, put in a separate pan. Half-finished beef meat, pull out of the broth, and put into a pan with onions. Cover and simmer for 15 minutes. The remaining broth - strain and add to the meat with onions. Boil. Put the rice washed under cold water into the boiling broth. Cook until done. Salting, peppering, seasoning hops-suneli to taste. Garlic and greenery chop, add to the ready-made soup bacon beef. The soup hurcho's recipe is very popular and can be prepared not only from beef meat. Bon Appetit!

Cooking method: Onion finely chopped, put in a pan and fry in vegetable oil. Pork washed, cut into small pieces, and then put into a pan with onions. Stew for 15-20 minutes. Then pour 3 liters of boiling water into the pot, allow the soup to boil, and then sprinkle the millet. 5 minutes before readiness, add to the harcho tkemali, seeds of cloves, coriander, pepper, salt, hops-suneli, finely chopped greens. Give the ready-made soup a pork loin to brew. This recipe of soup kharcho will appeal not only to adults, but also to children. Bon Appetit! 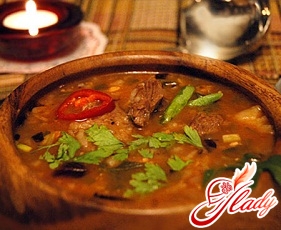 Cooking method: In a saucepan, with the addition of vegetable oil, fry the finely chopped onions and carrots. Rinse lamb, dry and cut into small pieces. Put the meat in a saucepan with onions and fry. Then add 3 liters of water to the pan, bring to a boil, salt, pepper. Cook over medium heat until meat is half ready, then add rice. Pepper and tomatoes chop with a blender or meat grinder, and then put in soup. Garlic chopped with garlic and add to the ready soup kharcho with lamb. Bon Appetit!

Cooking method: Wash the chicken, dry it, and then cut into small pieces. Put the chicken in a saucepan, pour 3 liters of cold water and put on fire. Brew until half cooked. In another saucepan, with the addition of vegetable oil, fry the finely chopped onion, and then add a piece of semi-prepared chicken to it. Stew the meat with onions for 20 minutes, then add the flour. Chicken broth strain, and then add to the pan with chicken and bring to a boil. Wipe tomatoes through a sieve. To the soup, add grated tomatoes, chopped walnuts, pepper, cloves, hops-suneli, saffron, cilantro seeds, crushed greenery, salt. To give soup huncho from a chicken is infused. Bon Appetit! We advise you to read:

Milk soup: the recipe for cooking