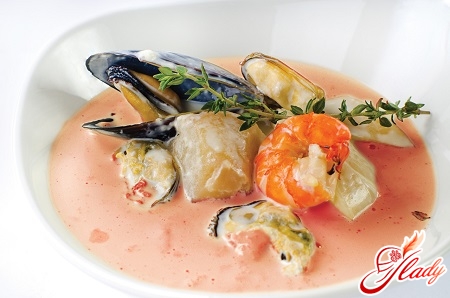 In order for life to be more colorful, it is worthmake yourself small culinary gifts. An exquisite dish can surprise and cheer not only you, but also your close people. Cream soup with seafood can become one of such recipes. Seafood not only have a unique taste, but also are very useful.

Seafood - a fount of health

Many girls follow their figure andrefuse most of the products for the sake of beauty and smartness. Any recipe from seafood, has a small amount of calories, and is enriched with a lot of nutrients. So girls can safely experiment with seafood, without fear of extra pounds. Eat deliciously and correctly - it is possible! Seafood includes: prawns, scallops, oysters, mussels, crabs, squid and, of course, fish. All these products are a storehouse of vitamin D, vitamins of group E, useful acids, phosphorus, sodium, sulfur, magnesium, zinc, iodine. In addition, that the seafood contains so many useful substances, they are an easily digestible protein. If you use any of the above products at least twice a week, you can significantly improve immunity. One of the most low-calorie marine products is lobster. A huge amount of zinc, potassium and copper is contained in lobsters. Shrimps, due to the large content of protein, for a long time they satisfy the feeling of hunger. And in order to have a beautiful and healthy complexion, you need to eat a large number of mussels. In many world cuisines there is a cream soup from the products of the sea. Especially it is observed in the Mediterranean cuisine, the Far Eastern and southern. Soups in the form of cream or puree have an unusual refined taste, a gentle consistency. As a rule, in order to emphasize the refined taste, they are filled with milk or cream. To make soup, you can take a ready-made recipe, and you can come up with your own. Products for such soups can be used as fresh, frozen or canned. 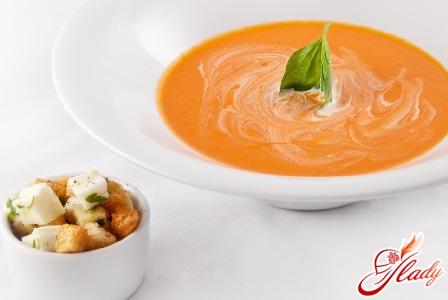 Variety is the source of inspiration

Cooking is always very interesting, especially ifthe recipe for the desired dish is not one. Variety is a source of good humor and unlimited inspiration for culinary experiments. Cream-soup from sea scallops with leeks Ingredients:

Recipe: Boil the leek in water (ratio 1: 1) until completely ready. Separate scallops from the brine and cut into small cubes. Chopped sea scallops and boiled onion steamed grind with a blender until a homogeneous mass is obtained. In the pot, put the resulting mass, add the cream and bring to a boil over low heat. Season the soup with salt. Before serving, a piece of butter should be added to the hot soup. The oil will soften the taste of the soup and give it a piquancy. Cream of shrimp and corn soup Ingredients:

Recipe: onion cut (not very finely), grate the carrots. Fry onions and carrots in butter until golden. Then add the corn (together with the liquid) and stew for 10-15 minutes. Chicken broth bring to a boil and add vegetables and corn from the pan, turmeric, cream, salt and cook for 15 minutes (after boiling). After cooking, whip the soup with a blender until a homogeneous cream mass is obtained. Add the prawns and boil the cream soup for about 15 minutes. 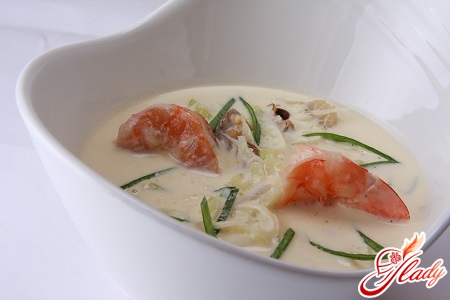 Cream-soup of mussels and corn Ingredients:

Recipe: Mussels are separated from the juice (folded on a strainer). In the saucepan bring to a boil dry white wine. Add the mussels and cook over low heat until the wine is completely evaporated (stirring regularly). Cut the carrots into thin slices, rinse the celery and cut into small pieces. Peel onion and cut into cubes. In the saucepan, warm the vegetable oil well, add the vegetables there and fry, stirring constantly for 4 minutes. Then reduce the heat and cover the saucepan, leave the vegetables stew. In a separate saucepan, boil 0.5 liters of water and add the corn, not separating from the juice, and cook for about 4 minutes. The resulting broth is filtered into another pan, using a sieve. Put aside 150 g of corn, and add the remaining corn to roasted vegetables in a sauté pan. Then put out another 3 minutes, remove from the plate and allow to cool. Cool the frozen vegetables in a blender and grind until a homogeneous mass, similar to the cream. Then add this mixture to a pan with chicken broth, pour in the milk, add salt, bay leaf, pepper, stir and bring to a boil. When the soup boils, reduce the heat and cover the pan with a lid. Cook for 3 minutes, then add to the mussels soup, the remaining corn, mix and turn off the fire. Cream-soup with shrimp and asparagus Ingredients:

Recipe: Clean shallots and cut into small cubes. Peel the asparagus, separating the coarse parts, cut into pieces. In the saucepan fry onion in butter (until the transparency). Then reduce the heat and add the asparagus, fry for 10 minutes. Then pour the broth, cover and cook for 20 minutes. After the soup has cooled slightly, beat it with a blender. Add the cream and bring back to a boil and cook for 20 minutes. Add salt, pepper, wine, nutmeg and turn off the fire. Fry the shrimps in butter. Add the prawns to the finished portions of the soup. Regardless of which particular recipe has been chosen, cream soup can be sprinkled with cheese or greens. Also to the soup can be served toasted toast or croutons. Bon Appetit!

Cream-soup made from cauliflower: recipe

Cream of pumpkin soup suitable for use at any age