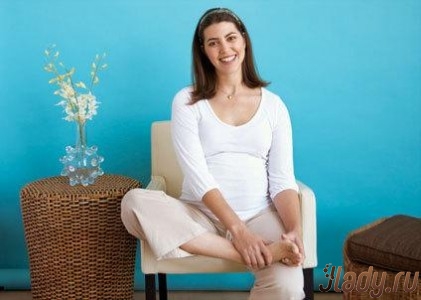 Today almost every second woman inThe time of pregnancy is faced with the problem of edema. Moreover, many of them are visible to the naked eye. While others discover this only when they can not remove the rings from the swollen fingers or begins to reap the beloved pair of shoes, which only recently was at the time.

Swelling during pregnancy is the norm or is it all the same pathology?

First of all, let's try to figure out what kind ofedema? Edema is divided into two types: physiological and pathological. The first of these occurs in almost every woman who is in an "interesting position." Most often, this kind of edema occurs under certain conditions, for example, if the weather is too hot, physical overload or a bias in the diet. As a rule, they do not pose a health hazard and do not require treatment, since when they eliminate the factors causing them or at rest they disappear on their own. As already mentioned above, swelling can be either explicit or hidden. If the first can easily be recognized in the footprints on the body, which appeared from the elastic bands of socks, when pressing a finger on the shin, as well as on the swelling of the face, hands and anterior abdominal wall. The symptoms of concealed swelling are both excessive weight gain and polyhydramnios. It is considered the norm if during pregnancy a woman types on an average of 10 kg. However, depending on weight and height before pregnancy, fluctuations can be plus or minus 2 kg. Starting from the 20th week of pregnancy the rate of increase is 50 grams per day or 700 grams for 2 weeks. However, to follow these rules, unfortunately, does not work for everyone. Even a slight deviation in weight is the reason for going to the doctor, since it is possible not only to make the pregnant woman heavier, but also dangerous by the development of serious complications.

The appearance of edema in the first half of pregnancyis a clear sign of a disease (kidney, heart or manifestation of diabetes). Edema that occurs in the second half of pregnancy, are considered a manifestation of varying degrees of severity of gestosis, which is quite common in modern obstetrics. The main symptoms of gestosis complicating about 20-25% of pregnancies: the appearance of protein in the urine, edema, increased blood pressure. At the pregnant woman simultaneously can be present as one, and two, and even three these signs. Dropsy (edema) is considered an early sign of gestosis in pregnant women. When there is nausea, vomiting, protein in the urine, headaches and a persistent increase in blood pressure, you can talk about pre-eclampsia. When along with the above complaints there are convulsions of skeletal muscles, this is the most severe stage of gestosis - eclampsia. Diagnosis of edema How to determine whether or not there is swelling? First of all, you need:

How to cope with edema?

A balanced diet will help to avoid edema. The diet of a pregnant woman should be rich in useful substances. It should include meat, fish, eggs, bread, fats of various origins, potatoes, pasta and, of course, rich in magnesium, potassium and calcium raisins and dried apricots. Ideal variant of a food - fractional food (at least 5-6 meals a day in small portions). It is necessary to limit the consumption of pickled, sharp, smoked products, as well as various sauces and fast food. Prefer a steamed or boiled product.

We hope that our advice will help you cope with swelling. If the measures taken were ineffective, you should consult your doctor. We advise you to read:

Tonus of the uterus during pregnancy: the causes of the onset, diagnosis, prevention

Thrush during pregnancy. Than to treat?

Sex during pregnancy. Is it possible to have sex?