Recently, in modern kitchens, allmore popular uses built-in appliances. Manufacturers produce all kinds of such equipment, and among them are cooking surfaces. By equipping their kitchen after the repair, many people are wondering - what kind of hob to choose? Let's try to understand this issue together. Modern cooking surfaces are electric, gas and combined. With electric and gas stoves, most of the housewives are familiar. But the combined surface for most people is still a novelty. Such surfaces are a combination on one panel of electric and gas burners. Most often there is a combination of three to one - three gas burners and one electric, or vice versa. And electric burners from different manufacturers are represented both by traditional cast iron pancakes and glass ceramics. Some manufacturers produce five hotplates, in which four gas burners remain at their traditional places, and a fifth electric one is added to them. When people are wondering which cooking surface to choose - gas or electric, it is difficult to recommend something, since there are minuses and pluses in both of them. Here everything depends, mainly on whether there is centralized gas supply in the house or not. If the house is gasified, then the gas cooktop is, of course, preferable, since it is cheaper to use. Although even if the house is not gasified, you can always use balloon gas. And if the gas is over for a while, you can switch to an electric burner. But if you like electric cookers, then, of course, the choice is yours.

But what is really important when choosing a cookingsurface, so this is the material from which it is made. In the market of home appliances today, enameled cooking surfaces, stainless steel or glass-ceramic hobs are mainly represented. The most common are enameled surfaces. They are inexpensive, durable, and the choice of colors is quite extensive. But there are enamels and drawbacks: it is difficult to clean from burnt food, over time, it may appear scratches and chips. More beautiful stainless steel cooking surfaces, which are matte or polished. They not only look stylish, but also wear-resistant enough, are strong. However, it is more difficult to care for them. They can see any traces of fingers, water, fat. To such a surface always shone, you need to constantly monitor it. Glass ceramics is used mainly in electric cooking surfaces. But in gas today it is no longer a wonder. In the models of the largest producers, these cooking surfaces were called "gas on glass". The hob with gas burners is covered with a layer of heat resistant glass or glass ceramics. "Gas on the glass" looks great, for a long time retains its appearance, because for the material of the surface a high-strength material resistant to temperature and mechanical loads is used. Such cooking surfaces are quite practical if certain rules are followed, and it is not difficult to maintain cleanliness on them. The only downside - such surfaces are afraid of sugar, so after cooking it should immediately be carefully cleaned, so that products containing sugar, do not damage it. Most often glass ceramic hobs are available in brown or black. But, in addition, some manufacturers produce surfaces of white, ivory, black anthracite, black with gray dots, as well as "cold ice", "mirror color" or the color of aluminum and stainless steel. Glass ceramic hobs with a pattern are in great demand. That, however, is not surprising - they look very stylish. Now a new material is being developed - porous glass ceramics. It is ideal for gas cooking surfaces, since the pores in the glass-ceramic are gas-fired. This will get rid of the burners. Such surfaces were called "gas under glass." The only thing that restrains the introduction of new items is the high requirements for gas purity. 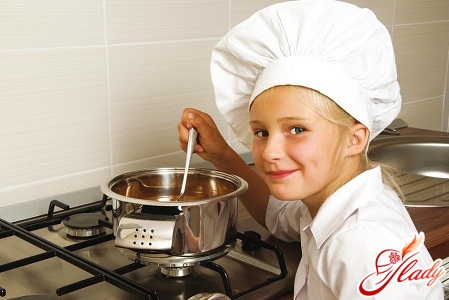 The basic range of electric cooker modelspanels are available from many manufacturers in standard sizes, in which the width is 60 cm. But there are also more extensive devices - both 80, and 90см. When installing the hob, some points must be taken into account. Sometimes they say that under the hob you can not arrange drawers. This is not quite true. Not only it is possible, but also it is very convenient. The best place to store kitchen appliances can not be invented. But since the surface of the surface heats up, in the box that is directly below it, you should make a perforation or set the grate. Modern hobs are very diverse in the presence of various functions and burners. Without additional information, it is very difficult to make a choice in favor of this or that model. First you need to decide how many burners you need and what sizes they should be. Classic models of cooking surfaces are available with four burners. But, as already mentioned above, there are those in which there are three and even five and six. You should know that there are fundamental differences between the burners of electrical and gas panels. If you think which gas cooking surface to choose, then you should remember that the dimensions of the burners should match the size of your dishes. The tongues of the flame should only heat the bottom of the dishes. Then the food is prepared faster, the energy is used more rationally. In this case, and the dishes last longer. The standard surface has two medium-power burners and one high and low power. In the latest models there are very powerful burners with several rows of tongues of flame. These burners are designed for ultra-fast cooking. They create two or more concentric rings of flame thanks to a multi-level design. In their desire to make surfaces more ergonomic, modern manufacturers did not ignore the shape of the burners. In addition to the usual round, hobs are produced with oval and triangular burners. Torches of triangular shape are very convenient, because they do not require gratings: the container can be put directly on the flat cover of the burner. In this case, the fire warms the bottom of the pan evenly. Oval rings are more suitable for cooking in oval dishes. As for electric burners, there can be from two to six on the hobs. In principle, they differ only in the type of heating element. In the traditional, familiar to us enameled cooking surfaces, use flat round thermoelectric heating elements - heating elements, which are placed in the cast-iron case. Such burners are called "pancakes", and plates with them are still popular. In these cooking surfaces, there are three types of burners: conventional, hotplates and automatic. Ordinary have average power. Express - burners have increased power and are used for rapid heating. They are marked with a red circle. The automatic cooking zones are marked with a white circle. They are equipped with a sensor, which itself determines when the water boils, and then resets power, not allowing the liquid to boil. More diverse in all parameters of the burner glass ceramic surfaces. They can be conventional, induction, halogen or high-light burners. In ordinary burners, heating is carried out using a metal spiral. In the high-light burners, a corrugated ribbon is used as the heating element. They warm up much faster. In about three seconds. But the fastest recognized halogen burners, which turn on and off instantly. And the last - induction hotplates. They are fundamentally different from all of the above, that they warm up the bottom of the dish directly. The cooking surface itself does not heat up. In it, under the glass-ceramic panel, an induction unit is installed, which generates electromagnetic radiation. It is something that heats the bottom of the dishes. The only requirement: for cooking on such a surface you need special utensils, in which the bottom has ferromagnetic properties. By the size and shape of the heating zone, glass-ceramic surfaces also can be very diverse: oval and round, with or without expansion zone. But here the specifics of the bottom of the dishes are very important, which must clearly correspond to the shape and size of the burner. 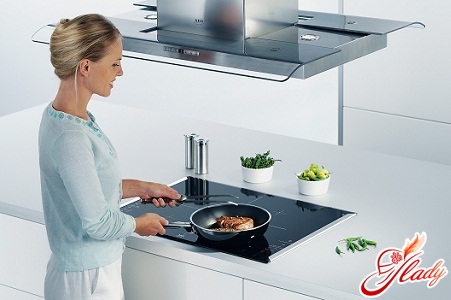 Modern hobs are equipped with many convenient and useful functions. The choice is yours, exactly what you need, depending on your habits and needs for cooking.

This is the so-called protection against overheating. The hob is switched off when a certain temperature limit is reached, or after a certain time, provided that no one touched the control panel during this time.

Most modern hobs are turned off if the boiling liquid enters the control panel.

When you press a certain key on the control panel, it "freezes" in this state.

When the cooker is in an inoperative condition, they can be removed, for example, in order to be kept away from children.

It is important for induction burners. In this case, the burner will begin to warm, if there is a pan or pan in the heating zone. Automation itself determines the size of the dishes.

With its help, you can program the cooking time and control it. For each burner, not one program can be recorded.

As you can see, the choice is extremely high - it all depends on your material capabilities and taste. We advise you to read:

How to remove the smell of cat urine?

How to iron the shirt correctly?

Crafts for the garden: ideas for the house and giving

How to choose a multivark according to your needs