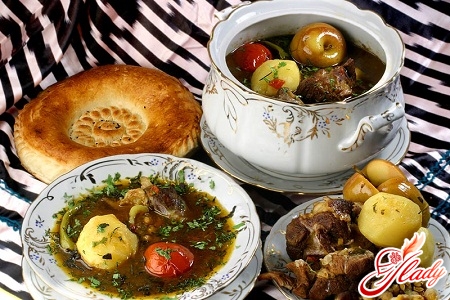 Shurpa is a very thick and rich soupmeat broth, using vegetables and spices. Shurpa (chorpa, shorpa) is a dish of Asian cuisine, which has very, very many variations, depending on the region. Most often, lamb shurpa is brewed, but beef, poultry or even fish can also be used. To cook the right shurpa from mutton, you need to choose the right meat - this is obvious. Must be fresh, moderately fat. Different recipes of lamb shurpa provide for different uses of meat. In some versions, the meat is cooked until ready or semi-prepared, and then the broth is brewed with shurpa. That is, to prepare such a dish, like a shurpa, the exact recipe is not needed. The main thing is to understand the principle. And it's simple. Meat plus vegetables, plus spices. The set of products and the density of shurpa can be varied as desired.

Preparation: Cut the meat into small portions. Put a pan with thick walls (ideally - cauldron) on the fire, put the lard (can be replaced with vegetable oil, it will be more dietetic). Melt, fry the meat in it. Pour cumin and coriander. Add the onions cut into half rings. Next - finely chopped carrots. Pepper should be cleaned of seeds, cut into strips and also added to a pan with vegetables. Put out a little and put tomato paste. Mix. Boil two liters of water. Pour boiling water on vegetables and meat, so that the water completely covers them. Bring to a boil, make a small fire and simmer for about half an hour. Prepare the potatoes: peel, cut into large pieces. Check the readiness of the meat. When it is soft, add the potatoes and pour more boiling water to the desired volume. Salt and pepper. Cook until the potatoes are ready. Finely chop the greens, pour into the prepared dish.

Preparation: Ribs are rinsed, cut, if necessary, placed in a saucepan. Pour 2.5 liters of cold water, put on a large fire. When water boils, it is necessary to remove the formed foam. Put a bulb in the broth, a few peppercorns (to your taste), salt. Boil broth over a small fire. At this time, do vegetables: peel potatoes, cut large (if the tubers are small, you can not cut them). Cut the carrots into circles. Pepper should be cleaned of seeds and cut large. When the meat is almost ready, the broth must be filtered. Remove from it onions and peppers. In a clean broth with ribs add potatoes and carrots, a few minutes later - pepper. Tomatoes peel and grate. Add the broth along with the laurel leaf and cumin. Cook for about 10 minutes until the potatoes and carrots are soft. At the end of the cooking, add the greens. Bon Appetit!

Find a good beef, whatever you say, is easier,than lamb. If you, of course, do not live in the Caucasus. Therefore, instead of shurpa from mutton, you can quite prepare a shurpa with beef. The technology is the same, because beef also requires, as a rule, long-term cooking. In the traditional version, when the mutton shurpa is prepared, the recipe provides that vegetables (carrots, potatoes) are laid in the cauldron whole or very large chopped. When it comes to preparing a shurpa for a large family, in a large cauldron, this is real and justified. But if you cook for two or three, it will be more convenient to cut the vegetables, instead of putting one carrot and two potatoes in the pan. Agree, a little ridiculous looks. In addition to potatoes, carrots, peppers, zucchini sometimes put zucchini, eggplant, peas chick peas, green peas or home-made noodles. As already mentioned, traditionally in Asia brewed lamb shurpa. But there are options for making shurpa and on chicken broth. For example, in Georgian cuisine.

Preparation: Peas to rinse and soak in cold water, leave overnight. In the morning, drain the water, cook the peas until ready. Cook the broth from the chicken. While the broth is brewed, cleaned and chopped onions, rinse rice and cherry plum. Remove the stone from the plum. Get the cooked chicken from the broth, separate the meat from the bones, cut it. Put onion in broth, rice. After 8-10 minutes, add cooked peas and cherry plum. Salt and pepper. Cook for about 15 minutes. In the finished shurpa put chicken, crushed herbs and serve. We advise you to read: