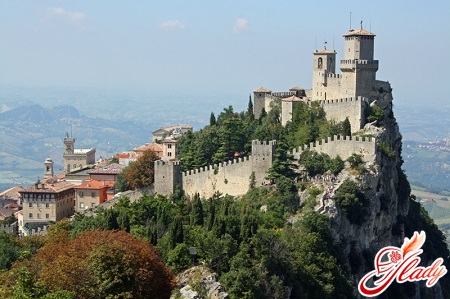 On the slopes of the tri-headed Monte Titano,located in the north-east of the Apennine peninsula, the tiny Republic of San Marino hides. Despite its more than modest size (61 square kilometers), this dwarfish state is one of the oldest in Europe. According to legend, it was founded in the very beginning of the IV century by a member of the Christian community from the island of Rab, the Marino mason, who, along with like-minded people, hid on the mountaintops of Monte Titano, fleeing religious persecution. The only neighbor of the independent Republic of San Marino is Italy, which surrounds it from all sides. The Sanmarins are very proud people, they have not been conquered by any state throughout history. Annually about 2 million tourists come to the republic to see the sights of San Marino, the main part of which are centuries-old castles, perfectly preserved to our days. 32 thousand Sanmarinians, who make up the indigenous population of the country, live in the tiny and fairy-tale beautiful towns of the communes of San Marino, Domagnano, Faetano, Chiesanuova, Monte Giardino, Fiorentino, Aquaviva, Serravalle and Borgo Maggiore. In each of the settlements there are small squares with castles, remains of fortress walls and narrow long streets that wind between ancient buildings and terraces. Modern San Marino is like a real museum of the Middle Ages in the open air. 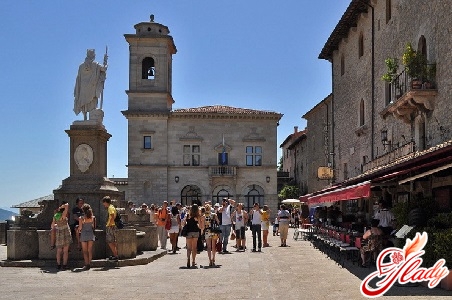 The most ancient buildings of San Marino

The main attractions of the country are inits capital city of San Marino. On top of Monte Titano is a complex of three ancient towers, the image of which can be seen on the state emblem, as well as on local coins of the euro. The oldest tower, called the Guaita, was erected in the XI century and was used for a long time as a prison. Throughout its history, the tower has been rebuilt many times. In its walls there is an old artillery weapon, which Italy repeatedly gave to the Sanmarinians in the XIX century. Guaita is a fortified structure of two rings of walls and several towers. On the south side of the tower is the beautifully preserved chapel of St. Barbara. Today, Guaita is open to tourists and is the most visited landmark of the country. The Tower of Chest, part of the famous tower complex, dates back to the 13th century. It is built on the highest point of Monte Titano. Its walls served as a fortification for a long time. The gate of the defensive structure was erected in the XVI century. Like the tower of Guaita, Chest was rebuilt many times, but this did not prevent her from preserving her original appearance. For more than half a century on the territory of the tower is the Museum of ancient weapons, the number of exhibits which includes a collection of medieval armor and samples of weapons from different eras. The third tower of the complex, Montale, was built in the early 14th century. Constructed in the form of a small pentagon, it for a century and a half warned the townspeople about the danger emanating from the neighboring castle of Fiorentino. Today, this tower is closed to visitors. 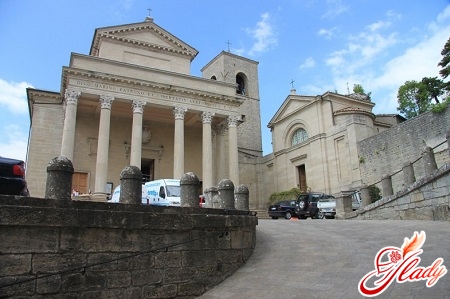 The main gate of the city and the Palazzo Publico

The Gate of St. Francis, through whichentrance to the capital of the state, were erected in 1361. They served the townspeople as a guard post. Later the gates were completely rebuilt, and in 1581 they were joined by external doors. On the inside of the gate are carved the arms of San Marino and the noble old Feltresk family. At the gate preserved an old plaque with a warning for wanderers not to bring weapons into the city. For non-compliance with this requirement of travelers awaited severe punishment. Next to the city gates are the church and the monastery of St. Francis, the completion of which dates back to the beginning of the XV century. Describing the sights of the republic, it is impossible not to mention the Palazzo Publico - the government palace, the construction of which lasted for 10 years and was completed in 1894. The palace was erected on the project of an architect from Rome Francesco Azzurri. The building belongs to the neo-Gothic architectural style. The right corner of the Palazzo Publico is decorated with a bronze statue of St. Marino. The majestic palace is guarded by smartly dressed guards, who are among the military formations of the state. In front of the palace is a small Liberty Square, in the center of which stands the statue of Liberty - a gift to the republic, made in 1876 by the German countess Wagener. Under the square preserved cisterns, which previously collected rainwater for the needs of the city. 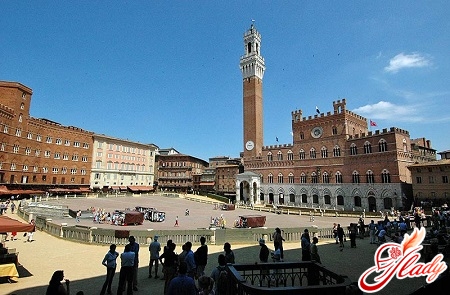 Basilica del Santo and the Church of San Pietro

Like Italy, San Marino is an ancient Catholicstate, and on its territory there are many religious buildings worthy of attention of tourists. The Basilica del Santo, founded in 1838, is one of them. Extraordinary beauty of the cathedral was built on the foundation of the Romanesque parish church of Pieve, standing here in ancient times. The majestic basilica, made in the neoclassic style, is like an ancient temple. It is decorated with 6 Corinthian columns, through which a tall white portico is supported. In the temple you can see a rich collection of ancient paintings and sculptures. The main altar of the Basilica del Santo is decorated with a statue of St. Marino, its author is the sculptor Adamo Tavolini. Under the altar is stored the skull of the founder of the republic. You can visit the basilica daily, it is open to tourists on holidays, and on weekdays. On the right side of the Basilica del Santo is a small picturesque church of San Pietro. It was here before the beginning of the XVIII century that the relics of Saint Marino were kept. The central place in the church is the altar, decorated with magnificent marble inlay, which was presented to the temple in 1689 by Italian musician Antonio Tedeschi. Above the sanctuary stands the majestic statue of St. Peter, made by sculptor Enrico Salordi. In the rock beyond the altar are niches in which once rested the remains of Saint Marino and his associates and faithful friend of Saint Leo. There is an opinion that these niches have healing properties. In the XIX century, the church of San Pietro was carefully restored, which allowed it to be perfectly preserved to the present day. 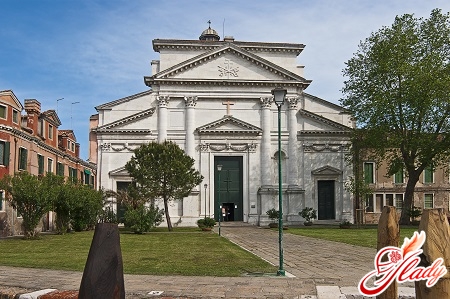 As in any country with developed tourism, inSan Marino runs many different museums. It is worth to visit the State Museum of the Republic, where you can get to know the history of this country, see the most ancient archaeological finds and works of art of artists from Sanmarinsky who lived in past centuries. The main part of the museum is located in the castle of Bergamo-Beluzzi. Near the museum there are two more attractions of the country: the Gallery of Modern Art and the Pinakotheque of San Francesco. In the halls of the gallery are more than 750 works of art of the XX-XXI centuries. In the Pinakothek, paintings and sculptural compositions of the 14th century and objects of the religious cult of the Order of the Franciscans dating from the 14th-19th centuries are exhibited. At the foot of Monte Titano on the San Marino-Rimini road is the Museum of Old Cars, which is visited daily by crowds of tourists. The museum has 120 exhibits, among which you can see not only retro cars, but also modern racing cars. Lovers of technology are attracted not only by this museum, but also by the car collection of Maranello Rosso, which includes more than 250 Ferrari cars. Despite the fact that the birthplace of these high-speed cars is Italy, the world's largest collection of Ferrari is located in San Marino. The collection shows the main stages of the production of racing cars of this legendary brand. San Marino attracts many unusual museums. Traveling through this mountainous country, you should pay attention to the only museum in the world of curious things, as well as the Museum of Emigration and the Museum of Wax Figures. The most stress-resistant tourists can be advised to spend time in the Museum of Torture, where more than 100 guns are collected, with the help of which people were tortured in ancient times. Among the landmarks of the republic is the Museum of Modern Weapons, in which, on a large territory, there are more than 1000 exhibits of weapons brought from different parts of the world. Fans of fauna will be interested in the Museum of Reptiles, located in the central part of San Marino. It contains exotic reptiles. Attractions in San Marino are festivals, annual crossbow shooting competitions, theater performances, meetings and other events that constantly attract attention to the state. The Republic is popular with tourists no less than its neighbor Italy. Once in San Marino, most travelers forget about the era in which they live, because in this country everything breathes the Middle Ages. It's not for nothing that the famous filmmakers love to shoot historical films like that. The main attraction of the country is the funicular, on which you can see from the bird's eye view not only the entire territory of San Marino, but also the nearby Italian lands. Those who skated, argue that such an air trip is a breathtaking sight.

Malta - attractions of the resort

Paris - attractions and history of the French capital