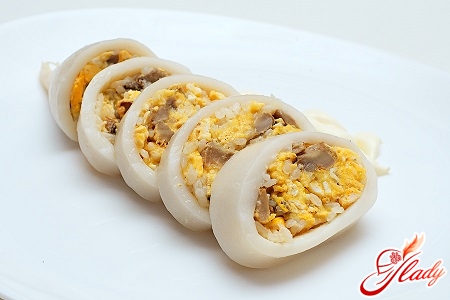 Cephalopod mollusks, or simply squid,have long been revered culinary specialists of different countries. In the world there are a lot of varieties of squid. They eat even octopuses and cuttlefish. In our latitudes the so-called ordinary squid is most common, its dimensions reach up to 30 centimeters (along with the tail and tentacles). In supermarkets, a frozen fillet of squid is often found, which is most conveniently used for preparing dishes. Squid meat is a huge supply of useful substances for humans, salads based on this shellfish will please your delicate taste not only you, but all members of your family. We offer you some simple recipes with squids and eggs.

Cooking method: Salad of squid with egg is quite fast and easy to prepare - you will quickly master it. So, take the frozen squid fillets, thaw it at room temperature or hold in cool water. Then put a pan of water on the fire; when it boils, throw there carcasses of squid, cook until three minutes. Pre-salt water, put 2 laurel leaves. Boiled squid meat for salads cut not thinly, but with medium strips. Rinse onion, peel and thinly cut with feathers. Go to the cutting of greenery: the squid loves various herbs, especially it is impressed by the scent of fresh dill. Grind the greens and send to a salad. Cut boiled eggs with a knife or egg. All ingredients carefully mix in a large bowl, season with mayonnaise, decorate with greens before serving. The recipe for this salad is inspired by nature itself. With the onset of spring, you want a fresh, fragrant and airy dish with cucumber and greens. This salad will be light and low-fat, if you prepare for him a special sour cream sauce, which is his little "zest". This recipe is good for breakfast, will cheer up and charge you with energy for the whole day. Ingredients:

Cooking method: Cut the squid carcasses, peel them from the entrails, rinse them underwater, scald with boiling water and remove the film from them with a knife (this is done so that the meat does not shrink when cooked and becomes hard). Divide the raw squid into parts, and then chop the straw. Then dip it into boiling water and cook for no more than three minutes, take it out of the water and cool it. While the squid is cooling off, boil 3 eggs, separate the proteins from the yolks, chop them into the same pieces and combine them with squids. Leave the yolks for refilling. The onion should be cut finely and sent to a salad. Cucumbers must be cleaned (it is most convenient to use a vegetable cutter), then cut them into strips. Mix everything. It's time for refueling: take a free container, mix sour cream, finely chopped dill and green onion, salt, add spices for fish. With a fork, crush the yolks until smooth. Add to sour cream sauce. Whisk it with a blender or whisk until a creamy texture. Salad will be ready after you generously fill it with sour cream sauce, place in a beautiful dish, decorated with lettuce leaves, and refrigerate a few minutes in the fridge.

Kalmar is a unique product capable ofharmoniously combined with many components. It can be successfully combined with vegetables, mushrooms, algae. But the recipe becomes especially piquant when fruits are added to squid. They can be fresh, baked, dried and smoked. Let's consider just such variant: a squid with dried fruits, in our case with prunes. Ingredients:

Cooking method: Before you start preparing the salad, you need to prepare the prunes. Dried fruits should be thoroughly rinsed under water, remove bones, if any, and pour boiling water. Prunes should be steamed properly, swelled, saturated with water and become succulent. Then cut it in the usual way. With squids, "straighten" as follows: scald them with boiling water and remove the film, quickly boil it in salt water, take it out using a noise and let it cool. Cut long strips. Undressed Adyghe cheese cut into strips. Sweet pepper peel off the grains, remove the tail and cut like the rest of the ingredients. Connect all the ingredients together, including prunes. Salt your salad, add seasonings, do not forget to put a couple of spoons of sugar, season with low-fat sour cream, put in a salad bowl, spread the slices of boiled eggs around the edges and serve on the table. The recipe for this salad, although it contains a lot ofcomponents, but it is quite simple to prepare and takes very little time. He will surprise you with his rich smoked taste, because such a combination of products you probably have not tried! Ingredients:

Cooking method: Start making a salad with a dressing. Bulgarian pepper will be the central element of the sauce, so we suggest starting with it. Nabolite all sides of salad pepper with a fork and send roast. Fry the vegetable from different sides, adding a little vegetable oil. When the pepper becomes rosy from all sides, it can be obtained. Cool the vegetable, prune the peel and remove it. Clean all the bones, cut off the tail. Then chop the pulp, add to it three tablespoons of mayonnaise and a pinch of black pepper. Rub on the finest grated garlic and add it to the sauce. Stir all foods and leave them in a cool place for a while. In the meantime, take care of the salad. Squid must be boiled in salt water, after cleaning from a thin skin, cut into strips and put the meat in a salad bowl. Cheese smoked plaits cut along, and then into cubes about one centimeter in size. Pasta should be cooked properly: it is important that it is slightly undercooked. To achieve this, dip the spaghetti into the boiling water, adding one spoonful of olive oil and half a spoonful of salt. Cook macaroni for a total of up to 7 minutes. After that, strain and add to the salad. You do not need to rinse the macaroni. Pour the salad into ready-made and real sauce. Spread on plates, decorating slices of boiled eggs, and sprinkle with greens. The recipe for this salad is universal, it is easy to prepare and suitable for a hearty lunch, and for a quick dinner. This salad is better served warm and eat as an independent dish.

Salad with squid, vegetables and sauerkraut

Recipe for potato salad is taken from everydaykitchen, its main components are simple and accessible to every hostess. As they say, "everything that is in everyone in the refrigerator." But adding to them boiled squid meat, you will appreciate its delicate refined taste, and be surprised how one minor touch can change the perception of the whole dish. Recipe like all lovers of vegetable dishes. Ingredients:

As mentioned before, squid perfectly combinedwith all kinds of vegetables. This recipe is a direct confirmation of this. Especially it will be liked by fans of vinaigrette, it is sometimes called "salad with squid". Potatoes and carrots should be boiled in advance, then let them cool. Cut the vegetables in the same way as on the salad, add chopped cucumbers and sauerkraut. Cook the squid for a short time, cool and cut into strips of medium size. Mix the ingredients. Salad we recommend filling with a mixture of sour cream and mayonnaise (in equal proportions). Salt, mix, spread on the edges of the salad bowl of boiled eggs, decorate with the feathers of green onions. Squid and chicken eggs are a win-win combination for a salad. On their basis, adding and experimenting, you can cook a huge variety of light, nutritious, healthy and, of course, delicious dishes. Implement the suggested recipes, and you will see for yourself. We advise you to read:

Italian salad with pasta - the best dish on your table

Salad from stalks of celery: open your mouth on a delicious stalk!