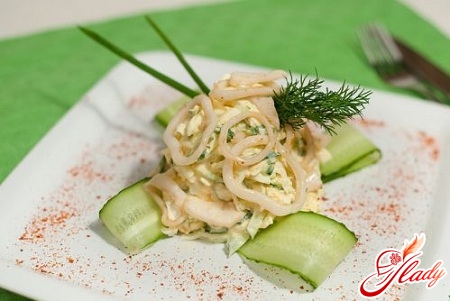 Unlike some still exoticfor us seafood - cuttlefish, for example - squid is no longer exotic. But it's one thing to take a bag of dried squid to a beer or order a squid salad in a restaurant, and another thing is to personally prepare a dish from this marine creature. And, strangely enough, many of us frozen pale violet carcasses lead to a sacred awe: not meat, not a bird, not a fish, but something incomprehensible. However, from this "something" you can prepare very tasty dishes. But you need to start with something quite simple. Prepare, for example, to start a salad of squid with cucumber. And at the same time you can learn how to cook squid. This is, by the way, a special process.

To begin carcasses squid need to unfreeze(it is unlikely that you will buy them already defrosted). Then thawed carcasses need to be processed: this process, although not very pleasant, but necessary. So, we remove the squid from squid: gently pull it with a nail and pull it. The film is removed easily, and where it sits very tightly, you can scrape a knife. The film must be removed from both the outer and the inside of the carcass, by the way, it is most convenient to do this under running water. Together with the film, you need to remove the insides (there are also such carcasses), as well as the "skeleton" - a transparent soft plate, similar to mica. Now proceed directly to the boiling. We put a pot of water on the stove and let the water boil. Add a little salt to the boiling water and put the squid carcass into it. Count to ten and quickly remove the squid from the pan (fork or noisy). We are waiting for the water to boil again and throw the next carcass into boiling water. More than ten seconds to keep squid in boiling water can not be! As a result, they are digested, become rigid and "rubber". That's all. Let the squid cool and prepare a salad from them. Note: If you still digested squid, then there is one trick, how to make them soft again: you need to cook the carcass for another hour (or half an hour). True, after such a boiling, the squid will be less than twice.

Salad of squid with cucumber and greens

One of the simplest salad recipes with squid. It turns out to be very tender and fresh, and the greens of dill makes the taste of this salad simply indescribable. Ingredients:

Preparation: Boiled calamari we chop noodles, cucumber, peel and cut straw. Washed and dried dill finely chopped. Spread all the ingredients in a salad bowl, add salt and mayonnaise to taste and mix the salad. You do not need to do anything else, except to give a salad of squid and cucumber to cool and serve it on the table. 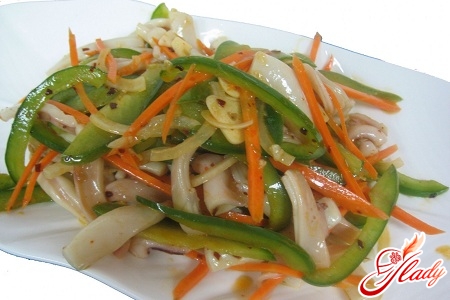 Salad of squid with cheese and cucumber

A more satisfying version of a salad with squid and cucumber, which can be prepared for a festive table. Ingredients:

Preparation: In this salad, in addition to the boiled squid, we will put eggs, which we boil hard, cool and clean. Cucumber can also be peeled, but you can not do it, but just wash it well and dry it. So, boiled carcasses of squid, eggs and cucumber are cut into strips, and for cheese we use a large grater. We put the prepared products in a salad bowl and dress with mayonnaise. Salt in this salad is not needed - it is enough in cheese and mayonnaise. However, if you want, you can also salad the salad.

Salad of squid with cucumber and corn

Just an ensemble of flavors, not a salad! And there are fresh vegetables in it, and seafood, and cereals, and even canned corn - than not the "nail of the program" of the festive feast? Ingredients:

Preparation: Defrost, wash, clean and boil squid. Cook hard boiled eggs, cook rice. We shred crayons and send it to a frying pan with warm butter. When the onion is browned to a golden color, add the squid noodles cut to it and quickly fry them for literally one minute. Then we throw the frying pan on the colander, so that it cools down and gives off excess oil. In the meantime, let's take care of the rest of the ingredients: cut the boiled eggs, green onions and cucumber into cubes. Put the cut products in a salad bowl, add to them boiled, washed and cooled rice, canned corn and fried squid and onions. Let's salad it, sprinkle it with lemon juice and dress it with mayonnaise, and then carefully mix it. We serve a salad, laying it with a slide and decorating with chopped green onions.

Salad of squid with sea kale and salted cucumber

A very "correct" and very useful salad, which is also distinguished by a dietary sauce for refueling. Ingredients:

Preparation: Cooked squid sliced ​​straw, we also cut the salted pickle cucumber, and finely chop the onions. We put the prepared foods in a salad bowl and add the sea cabbage to them. We fill the salad with a sauce of vegetable oil and vinegar (three to one), seasoned with salt and black pepper. We leave the salad in the refrigerator for six hours (for example, for the night), we serve it chilled. 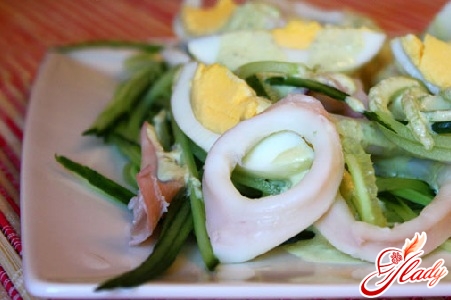 Salad from squid with canned cucumbers

If there are recipes for salad from squid with cucumbers fresh and salty, then for completeness, let's try to make a salad with pickled cucumbers. Ingredients:

Preparation: Boil and cool squid, which then cut into strips. Carrots and potatoes are mine, cook, cool, clean and cut, too, with straws. Also cut and peeled pickled cucumbers. Adding green peas, salt and pepper (if desired) to the cut ingredients, dressing the salad with mayonnaise, stirring and decorating with herbs. That's all. Of course, salad recipes with squid and cucumber are much more than we offered you for testing. However, start with something in your opinion simple: maybe you will also be visited by some ideas for improving the taste of such a salad. Then, please share these ideas with us. In the meantime, cook with pleasure and a pleasant appetite for you! We advise you to read:

Salad with shrimps and Peking cabbage: a recipe for every day

Salad with mango and shrimp - exquisite luxury of taste

Beetroot salad with prunes and walnuts