Would you like to make some simple,but at the same time a hearty and nutritious salad? Great! After all, at any time of the year, a variety of vegetables and fruits, using which you can get a wonderful dish. Today's example is a salad with ham and cucumbers, and below we will consider several of its variations.

Salad with ham, cucumber and cheese

Cooking method: Salted cucumbers cut into long strips. Egg boil, allow to cool, after grinding or rubbing on a large grater. Remove the ham from the film and cut into strips. Hard cheese rub on a medium grater or cut into cubes. All the components to put in a salad bowl, season with mayonnaise, a little salt and mix thoroughly. To decorate, you can use cheese, pre-grated on a small grater, and shredded greens. Salad with ham and cucumbers ready!

Salad with cucumbers, ham and chicken

Cooking method: Boil the chicken in advance, let it cool down. Carrots rinse and peel, grate it on a large grater or cut into thin slices. Onion cut into thin semicircles. All this put on a hot frying pan with sunflower oil and fry until golden brown, let cool. Wash fresh cucumbers and cut into thin strips. The ham is chopped strips, chicken meat - small slices or cubes. All the ingredients are put in a salad bowl, seasoned with ketchup and mayonnaise, mixed well. Salad ready! 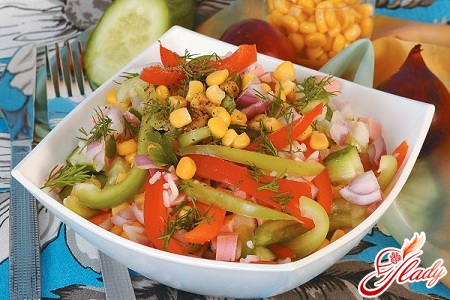 Vegetable salad with ham and cucumber

Cooking method: Cabbage finely chopped and rubbed with a little salt. Add the lemon juice and let it sit for a while. At that time, cut the salted cucumbers into pieces. Remove the ham from the film and cut into strips. Apples peel and grate on a large grater. In advance, boil the carrots for half an hour, let it cool and cut into circles. Half an orange cut into small cubes. Boil the egg, allow it to cool and grate on a large grater. Salted hard cheese cut into thin strips. All ingredients pour into a deep bowl, season with vegetable oil and mix well. You can serve in separate plates, each serving garnishing with celery greens. Salad ready!

Salad with cucumbers, ham and tomatoes

Cooking method: First, wash the red onions, cut into rings. Now make a marinade. To do this in a deep bowl, mix the water, two hundred milliliters of vinegar and sugar, mix well. Put onions in a bowl with marinade for half an hour. At this time, clean the ham from the film, cut into strips. Wash cucumbers and cut into thin strips. Cut the tomatoes into small cubes. Lettuce leaves can be arbitrarily broken. Cut the cheese into small slices. Now we'll prepare the gas station. Mix fifty milliliters of vinegar, vegetable oil and mustard, mix well. Put all the ingredients in a salad bowl, including the pickled onions, season with the resulting sauce and mix thoroughly. Salad ready!

Salad with ham, cucumber and radish

Cooking method: First, wash the radish, grate it on a large grater or cut into thin straws. Remove the ham from the film, cut into thin strips, peel the cucumber and cut it into small cubes. Put all the ingredients in a salad bowl, add salt, freshly ground pepper, season with sour cream. Mix, and before serving sprinkle with pine nuts. Salad ready! 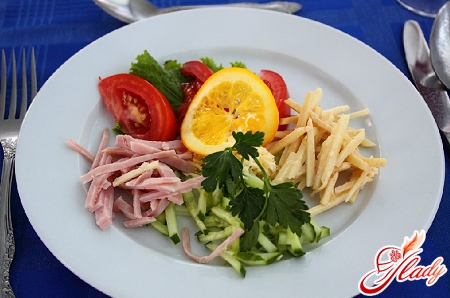 Cooking method: Wash the carrots, rub it on a large grater. Cut the onion into small cubes. Now they are sent together to a hot pan with sunflower oil and fry until golden brown. At this time, cut the mushrooms into thin slices. Fry them in oil, which is left from vegetables. Ham cut into thin strips, cucumbers - small cubes. Chop garlic cloves with a knife and finely chop or pass through the scabbard. All the prepared ingredients should be transferred to a salad bowl, seasoned with mayonnaise and mixed thoroughly. Cheese grate on a fine grater and now decorate the dish on top. Salad ready! Did the guests unexpectedly come to you? No problem! Now you know some wonderful recipes that you can cook quickly enough. Enjoy your meal! We advise you to read:

Salad with shrimps and Chinese cabbage

Salad with chicken and celery: for gourmets and lovers of healthy food