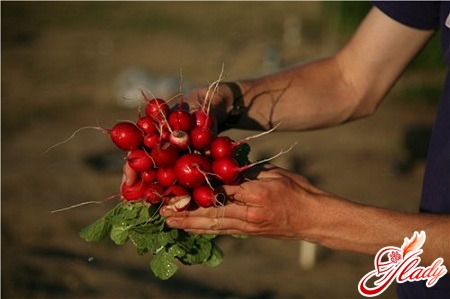 Radish - the very first, and therefore the most popularspring vegetable. The value of radish is determined not only by the fact that it has a high content of a number of elements necessary for man and vitamins, but also because radish is one of the first these vitamins bring to people, enabling them to restore body stores after a long winter. Radish, or as this vegetable is commonly called, radishes, the cultivation of which is not difficult, was exported, according to legend, from China by the traveler Marco Polo. From Venice, where he brought it, the radish spread throughout Europe, from where it got to Russia, on personal orders from Peter I. Radish is famous not only for its nutritional, but also medicinal properties. It excellently removes slag from the body and, importantly for people who are overweight, splits fats. Radish opens season of early spring vegetables. He is also the fastest-growing of the family of root crops. But radish varieties are so diverse in the ways of growing and maturing that it allows you to have a fresh radish all year round on the table. European radish is the fastest-growing - it ripens within twenty-twenty-five days. Among the varieties are "Early Red", "Deca", "Goddess", "Icy icicle", "Heat", "Dawn", "French breakfast", "Basis" and others. Roots of these varieties weigh 7-20 grams, and the shape varies from round to elongated. Coloring is also very diverse - from white and yellow to pink, red and purple. Radish contains a large number of mineral salts of potassium, calcium, magnesium, phosphorus and iron, which are easily absorbed by the body. Rich in radish and vitamins: it contains vitamins B, enzymes, ascorbic acid and organic acids. Radish is a cold-resistant, but very light-loving plant. Radish seeds begin to germinate at 2-3 ° C, and shoots can withstand even small frosts - up to -2-3 ° C. Adult plants are not afraid of short-term frosts and up to 4-5 ° frost. But the optimum temperature for growing a radish is + 16-18 ° С. Cultivation of early radish begins in late February - mid-March, when it is sown in greenhouses. The sowing of the radish, grown under film cover, begins in late March. Under normal conditions, radish can be sown in the middle of April, as soon as the first opportunity to work in the garden is available. Using the technology of growing radishes under the film, the harvest can be obtained two weeks earlier.

Grow radish can be on that piece of land,which in future is intended for growing tomatoes. You can sow it until the twentieth of May, almost every week. This will enable not only to harvest a good harvest, but also to prepare for planting the next crop of soil. Sow seeds better in rows to a depth of up to two centimeters. If you plant the radishes deeper, then the root can not tie. The distance between the rows should be 8-10 cm. In such a scenario, about 15 g of seeds can be planted on one square meter, which amounts to 1.5-2 thousand pieces of seeds. It should be borne in mind that the cultivation of radishes in the period when the light day is more than twelve hours is undesirable. Despite the fact that the radish is developing faster, it often shoots an arrow, and the root crops become small, bitter, woody. Therefore, the optimal dates for sowing radish are early spring or the second half of summer. To radish seeds well up, they should be sown in the soil, previously spilled water. When the first real leaf appears at the shoots, they need to be weeded out, leaving a distance of two to three centimeters between the plants. Many beginner farmers are not able to produce good harvests of radish precisely because of untimely thinning. But experts say that it is better to initially sow one seed, as thinning can damage the root of the remaining plant, and it can then grow worse or even form arrows. It must be sown at the rate that the distance between the plants is 5 x 5 cm. 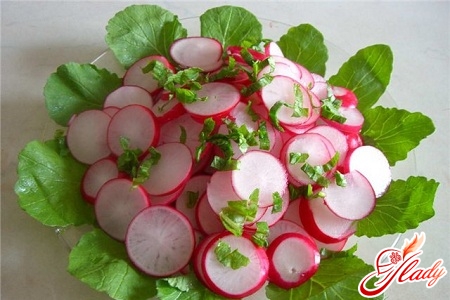 Technology of growing and care of radishesvery simple - loosening, weeding, watering. Since this plant is very hygrophilous, it should be watered, especially in dry weather, twice a day - in the morning and in the evening. In this case the radish grows dense and juicy. When the plant lacks moisture, its root crop, if formed, grows hollow and coarse, and the plant immediately releases the arrows. On cool and cold days it is necessary to water radish moderately and rarely. With the onset of heat watering is replaced by an abundant and frequent. In dry and hot weather, the weekly rate of radish irrigation should be 10 liters / square. m. Radishes especially need moisture, when the first real leaf appears, and root crops begin to form. If there is dry weather, then you can not keep the radish without moisture for more than three hours, otherwise it will later develop incorrectly. Without watering your radish will grow stiff and bitter. But excessive watering also leads to some problems. In this case, the radish will begin to crack. As we already mentioned above, radish when grown during a long daylight day becomes small and not tasty. To avoid this, in the summer, to reduce the length of the light day, you can make screens of black film. To obtain an early radish it is advisable to grow it in greenhouses, greenhouses or under film shelters. Sowing is carried out at such times as are determined by the design of the hotbeds and the weather conditions. Many gardeners have greenhouses on the plots, the heating of which depends on solar insolation, and the time of sowing in them usually falls on the first and second decade of April. To accelerate the onset of emergence, the seeds can be germinated before sowing.

Radish, in principle, is not picky about the compositionsoil, but it grows particularly well on a rich in organic matter, loose soil with a weakly acid or neutral reaction. For the cultivation of this root crop, cold and heavy clay soils, as well as sandy light earths, are not suitable. In order to grow radish on such soils, they must add humus in the amount of 10 square meters. m 20-30 kg. In the garden where you are planning to sow radish, the soil should be prepared from autumn. To do this, it must be treated with an aqueous solution of Baikal EM-1, dissolving it in a ratio of 1: 100. The rate of application of the solution is 2-3 l / sq. Radish has a high energy of growth, therefore it requires strong nutrition and is responsive to organic fertilizers. Therefore, it is good to introduce a compost to the garden intended for radish from autumn. Incidentally, in this bed, due to the activity of microorganisms, snow in the spring will come down first. Spring processing should be carried out when the soil warms up no lower than 10 ° C. Radish planting should be started no earlier than seven days after tillage. Radish can be planted in places where grown crops such as tomatoes, cucumbers, peas, potatoes, beans, beans. You can not add fresh manure to the land - in this case the radish will be hollow inside. It needs to be fed only by perepremshey organics. Pay attention - if there is not enough nitrogen in the soil, then the leaves turn yellow in the plant, the radish poorly forms the root crop and the tops. This problem can be solved by using complex fertilizers with an increased nitrogen content. If the roots are not tied, and the leaves look normal, then the soil lacks potassium. In this case, potassium fertilizers should be added. The radish is cleaned selectively, as it ripens. The first collection of early varieties begins twenty-twenty-three days after the first shoots, and the early-borns begin in about four to four and a half weeks. 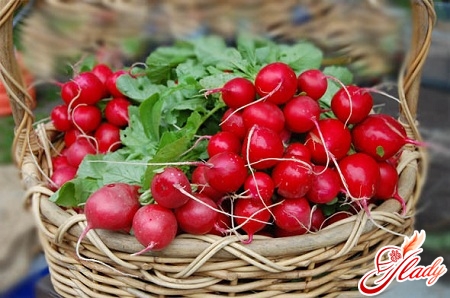 You can not grow radish and on acidic soils,because there radish affects the virus disease - keel, in which the root part of the fetus appears outgrowth. Such root crops should not be used, but destroyed. In late May - early June, when all livestock wakes up, radish can damage cabbage fly and cruciferous fleas. Because of this, small "sores" appear on root crops. Pollinating leaves of radish with ashes, infusion of garlic or tobacco dust helps to avoid this scourge. Cruciferous fleas can destroy radish crops before emergence. To prevent lesions from them, we must ensure that weeds do not appear on the beds. In addition, frequent loosening and sprinkling of soil should be carried out. The cabbage fly lays eggs on the stalk in May-June, or on the ground near the radish stalk, eggs, of which about a week later there appear larvae that gnaw through root crops. Against these pests, the following repellent mixture is used: 100 g of tobacco dust, 100 g of wood ash and 1 teaspoon of ground pepper. Bring it into the aisles, after which loosen the soil every three to four days to a depth of two to three centimeters.

What can you do with an old mattress?

What utensils to use for a microwave oven

Smell in the fridge. What is this "beast"?

How to choose a vacuum cleaner?

How to choose the mattress for the bed correctly: tips and tricks