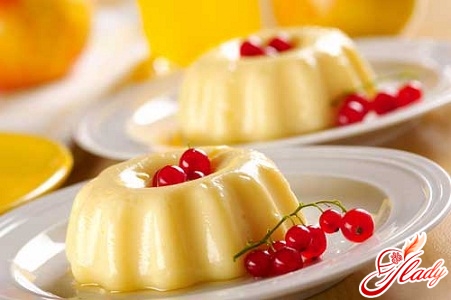 First, let's talk about what all the same ispudding? It is a dessert of milk, flour, eggs and sugar with fruit. At present, the housewives practically do not bake puddings at home, but today we will fix this and prepare a delicious dessert. Pudding is a recipe by itself, easy enough to prepare and therefore even a beginner mistress will be able to please her home with a delicious dish. How to cook pudding?

Cooking method: In order to prepare the pudding from the cottage cheese, it is necessary to separate the egg yolks from the proteins. From milk and semolina cook porridge. Egg yolks add to the cottage cheese and beat with a mixer in a homogeneous mass. Then add to the cottage cheese raisins, lemon peel and vanilla sugar to taste. Cottage cheese with ingredients mixed with semolina porridge. Sugar and egg whites to beat in a magnificent foam, and then shift to the previously prepared mixture. To stir thoroughly. Form the baking grease with butter and put the curd mixture, and then put in the oven. Bake until browned, at a temperature of 180 degrees. Pudding is a curd recipe that the whole family will love. Cottage cheese pudding is ready, pleasant tea party!

Cooking method: Preparation of rice pudding begins with the fact that in the pan it is necessary to pour out the milk, add to it sugar, cream and lemon zest, and then bring to a boil. Rice thoroughly rinse and put in a baking dish greased with vegetable oil. Then put rice in the mold and pour it with a hot milk mixture. Add grated nutmeg and butter. The form should be placed in the oven for 40 minutes and baked at a temperature of 180 degrees. After this, the pudding from the rice is mixed and again put in the oven until all the liquid evaporates. Pudding rice is ready. Have a nice tea! 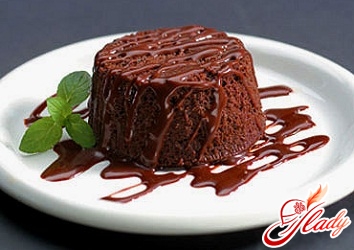 Cooking method: How to cook a chocolate pudding? For this, butter melted, combine with flour, and then add cream. The finished mass is transferred to a pan, and then brought to a boil. Then add chopped chocolate, vanilla sugar and sugar usual, bring to a boil again and mix thoroughly, and then cool. Egg yolks separated from proteins and whipped separately, and then add them to the pan. Form for baking grease with vegetable oil, and then put in her future chocolate pudding. Put the form in the oven and bake for half an hour, at a temperature of 180 degrees. Chocolate pudding recipe, can contain not only dark, but also white chocolate. Have a nice tea!

Cooking method: How to cook pudding English? To do this, the flour must be combined with a baking powder, add softened butter, salt, sugar and eggs. Stir thoroughly, then pour in the milk. In the baking dish, put the jam, and on top of the resulting dough and cover with foil. The form is put in the oven for half an hour and baked at a temperature of 200 degrees. English pudding is a recipe that everyone will enjoy. Have a nice tea!

Cooking method: Separate the proteins from the yolks, and then combine the yolks with vanilla sugar, sugar and butter. Beat to a thick and lush mass. Bananas clean and grind with a blender, and then combine with the previously prepared mass. Then add the pineapple juice and biscuits to the bowl. To stir thoroughly. Egg whites to whip in magnificent foam and to connect with the basic weight. Form for baking grease with vegetable oil and put in it the whole mass. The form is put in the oven for half an hour. Bake at a temperature of 180 degrees. Pudding is banana ready. Sprinkle sugar before serving. Have a nice tea! 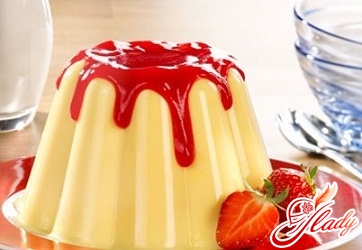 How to make milk pudding? To do this, in a saucepan combine milk, sugar and vanilla sugar and put on fire. Bring to a boil and add the starch, followed by the beaten egg yolk. To stir thoroughly. Continuously stirring to leave on fire for another 5 minutes. The resulting mixture is put in a mold, covered with food film and put in the refrigerator for several hours. Milk pudding is a recipe that will become an ideal base for any tea party. Have a nice tea!

Cooking method: Separate the egg whites from the proteins and beat them into a lather. In a frying pan, with the addition of vegetable oil, fry the crushed onion. Egg yolks mixed with ground meat, add fried onions, and then enter the egg whites. The resulting mass thoroughly mix. Form the baking grease with vegetable oil and put in it the resulting mass and sprinkle with breadcrumbs. The form should be placed in the oven for half an hour and baked at a temperature of 180 degrees. Meat pudding ready. Have a nice tea! We advise you to read:

Cake Prague: a recipe for cooking

The recipe for royal glaze