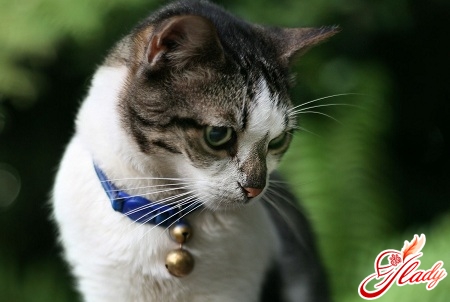 It is said that if a cat lives in the house, then in thisThe house doors are open for happiness. In fact, these affectionate purring creatures are able to brighten up life, cheer up, relieve stress and even cure some of our sores. However, the hassle from such a neighborhood is no less than pleasure. Especially if your home fluffy (and, perhaps, naked) doctor and psychotherapist is a female specimen. Sooner or later, your pet will set out to reward you with an innumerable number of your own offspring. But for you, foreseeing such a perspective, it would not hurt to find out at what age she is capable of becoming a mommy and how long this ability preserves, how the cat's pregnancy proceeds, what its period is, what surprises it is to expect the masters, how to take care of a pregnant cat and whether this prospect can be prevented.

Reproductive age of a cat

Cats are animals "early". Most domestic pussies are able to conceive and give birth to before the year. Most often puberty kittens reach at the age of six to eight months. But there are also such persons who already at four months can become pregnant. However, such a young age veterinarians consider unfavorable for the first pregnancy: it is better if it comes after a year. From the very first estrus, a healthy cat retains the ability to become pregnant and give birth almost until death. Such a concept as menopause to these animals is not applied. True, it all depends on the health and general condition of the individual. The most active and safe (and even useful) period for the pregnancy of cats is from two to five years. And the frequency of delivery is not more often than once a year, or, though, through one estrus. The estrus itself (in the scientific estrus) proceeds without any visible symptoms. That is, "traces" of this condition - bloody discharge - you will not see. But the behavior of the cat changes markedly. She becomes unnecessarily restless and compulsively affectionate, reads the house with crying cries and tries to escape from this house. The period of estrus lasts an average of a week. However, its duration is quite individual. The periodicity of this period also does not have a fixed frequency. Some cats flow every month, and some only twice a year. Classic periodicity - every three months, that is, every season. However, for nulliparous cats or those that have not yet been mated, this periodicity is not relevant. In general, your cat is able to become a mommy for half a year already (if the estrus starts at the age of four months) and does not lose this ability to the most advanced years. That is, the length of the reproductive age of a cat is almost the whole of her sexually mature life. But this is only on condition of good health and favorable living conditions. 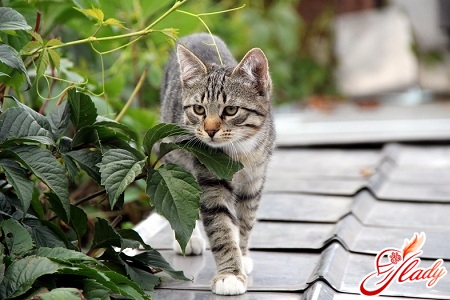 The course of pregnancy

The gestation period of cats is on average twomonth. Most animals experience this period relatively calmly. In the first month of pregnancy, no visible changes in the appearance and behavior of cats are often observed. The animal behaves as usual, eats its usual food and does not betray its condition. Therefore, at this time to determine the pregnancy of a cat can be very difficult. And in the first three weeks even ultrasound examination will not yield any results. Possible but not mandatory changes are increased appetite and longer sleep time, as well as nausea in the morning. If the first half of pregnancy in cats is practically asymptomatic, then in the second half there are clear signs of an interesting position of the cat. From this moment the kittens begin to grow actively, accordingly will grow and the abdomen of the mother. But at first this growth is completely invisible. But noticeable change in the color and size of the nipples of a pregnant cat: they swell and turn pink. Among veterinarians and owners of cats, this sign is generally considered to be clear evidence of feline pregnancy. Noticeably increase the stomach begins only in the last trimester of pregnancy. At this time, you can already feel the fruits and feel their stirring. The ultrasound study conducted in the second half of pregnancy will show the number of fruits and determine possible pathologies. In a healthy cat, this period is usually without complications, and the average duration of pregnancy in a cat varies from fifty-eight days to sixty-eight, but sometimes even less or more for two to three days.

Even a completely healthy cat can have a pregnancybe complicated by various pathologies. In addition, during this period, there may be an exacerbation of chronic diseases, various infections and hormonal disorders. And even if your pussy is distinguished by excellent health, then it is not immune from such pathologies as:

Possible complications during pregnancy in cats:

Therefore, be especially attentive to your pet during this period and be sure to show it to the veterinarian.

Care of a pregnant cat

What kind of care does your cat need during this period? As a rule, during pregnancy, the cat does not need special care: after all, pregnancy is not a disease, but a natural condition. Therefore, do not seek to limit the mobility of a pregnant cat and do not overfeed it. And this is precisely what the inexperienced owners of cats are guilty of. The fact is that a sedentary lifestyle can provoke obesity of an animal, even if not during pregnancy, then after childbirth. This also contributes to an excessively abundant diet. If in the normal state a normal healthy cat can control its appetite, then the pregnant pussy often loses this control, and can eat excess. It is necessary to control the excessive jumping only during the last periods of pregnancy. As for the diet of a pregnant cat, in the first month it should be the same both in volume and composition. However, veterinarians advise to increase the amount of vitamin-rich food. If at this time the cat shows interest in fresh vegetables and fruits, then try to give her carrots, zucchini, apples, pumpkin. Although such changes in gustatory predilections in pregnant cats are rare. If your cat is accustomed to ready-made food, then translate it into a kitten feed, which is suitable for pregnant pussies. It is not forbidden to give the cat and vitamin supplements, but only after consulting with a veterinarian. During the second half of pregnancy, increase the amount of food eaten by the cat one and a half times. And even in this period, she needs protein-rich foods: cottage cheese unsweetened sour milk, chicken eggs, beef. Only food should not be greasy, and even more so, fried or spicy. And never feed the cat by eating yourself: smoked and spicy food to cats (especially pregnant!) Is contraindicated. Proper care for a pregnant cat implies systematic observation by a veterinarian. In most cases, such visits are of a preventive and consultative nature. However, at the very beginning of pregnancy, the cat needs to be examined by a veterinarian. This will save her from possible complications, and you from unnecessary troubles and expenses for treatment. Shortly before the birth of a cat, it is also necessary to pay a visit to the doctor: she will undergo another examination with a specialist, and you will receive a consultation about the upcoming birth. 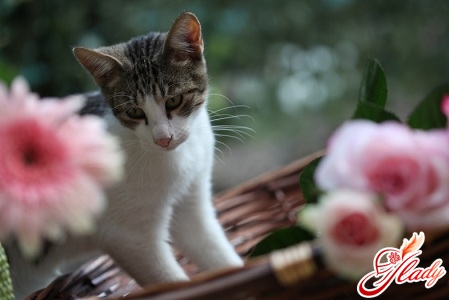 How to prevent pregnancy

Whichever cat you loved, if you do notwant to get from her offspring, you need to take preventive measures. By his own will, the cat will not refuse to become a mummy. The most radical way to save a cat from the prospect of pregnancy is sterilization. Today, this procedure is no longer very expensive, and it is carried out in almost all veterinary clinics. Sterilization of cats can be surgical, radiation and medicamentous. The safest in terms of the consequences is surgical. Surgical sterilization is carried out by several methods:

The most favorable for the animal methodsterilization - removal of the ovaries, but its use is possible only for young (up to a year) cats that have never given birth. If your cat has more than a year, if she at least once brought kittens, then you will have to castrate the animal. But the first two methods by modern specialists are almost not practiced, as they have not very good consequences for the physical and mental health of the cat. And which method to prefer, the veterinarian should decide. Side effects in a properly conducted operation usually does not happen. But sterilized and neutered cats are prone to obesity. In all other respects, the cat remains the same, keeping playfulness, general activity and all instincts (except sexual). But the time for such an operation you must determine yourself: the experts on this issue have no common opinion. Today, sterilization is considered the most humane and most effective way to prevent pregnancy in cats. But if you are sorry to put your petomus under a surgical knife, you can stop on special injections - injections of hormonal drugs. However, such shots can not be made sick animals and cats older than seven years. And one more (the most common) way to prevent feline pregnancy is oral contraceptives. But this method does not always work, and also badly affects the physical health of the cat. Love your pets: they trust you unlimitedly. Take care of them and be lenient: in fact you are responsible for those who have tamed! We advise you to read:

How to determine the pregnancy of a cat?

How to take delivery in a dog?