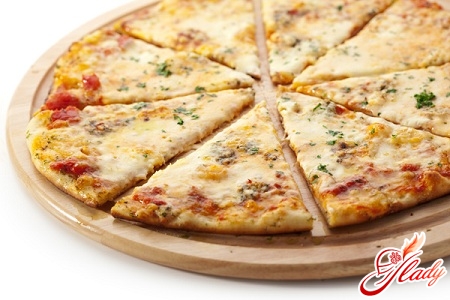 The notions of "Italy" and "pizza" for us (and for allin the world) are simply inseparable. And interestingly, there are no more analogues of this dish in any kitchen. But the Italians have tried to glory: the recipes of Italian pizza are so many that enough for everyone! However, the culinary specialists of other countries also did not remain in debt, they come up with more and more new recipes, but nobody could surpass the taste of traditional pizza. There are in the Italian cuisine recipes for pizza with a rich history, there are some that are surrounded by myths and legends. And there is a recipe for pizza, which is unlike any other - Quatra Formaggi (Pizza 4 Formaggi), or Pizza four cheeses. It is said that this pizza is just a gourmet find that it can stun the most sophisticated tasters, that it simply does not have any shortcomings. By the way, it's not difficult to make this pizza at home. It is much more difficult to understand the sorts of cheeses used for its preparation and in their correct combination. However, nothing is impossible, which means that we will be able to do it. 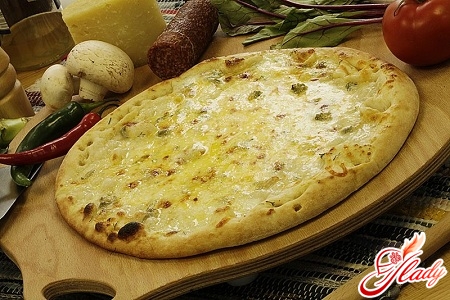 Its amazing taste, this pizza is obliged,of course, its composition, which, by the way, does not include anything other than dough and cheese, as Pizza 4 of cheese is cooked without any sauces and even without the usual tomatoes (that's why it refers to the so-called white pizza). The traditional composition of the pizza "Four Cheeses" is mozzarella (soft cheese), gorgonzola (cheese with mold), parmesan (hard cheese) and emmental (flavored cheese). What kind of cheeses are these, and are there any other possible combinations? Let's figure it out.

The most "successful combination of cheeses for this pizza:

However, you can choose cheeses at your own discretion. The main thing is that pizza "Quatro Formagio" was attended by soft, hard, fragrant and blue cheeses. 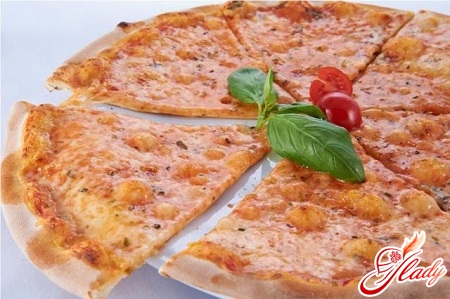 The recipe for pizza "Four Cheeses"

The recipe for this Italian pizzais quite simple. In addition to four cheeses for its filling use spicy herbs and spicy seasonings, and the base is baked from yeast dough, for which we need the following ingredients:

Preparation: The flour must be sieved through a sieve and mixed with sugar, salt and dry yeast of rapid action. Egg whisk to light foam, add to it olive oil and pour warm water or milk (milk can be diluted with water). Pour all this into a bowl of flour and quickly knead the dough, which should turn out to be soft, but should not stick to your hands. Next, leave the dough to go for an hour. Ready dough spread on a table, sprinkled with flour, and form a round base for pizza - a cake five to seven millimeters thick. Then we shift the cake to the baking sheet covered with baking paper, grease it with olive oil (one teaspoonful) and in several places pierce with a fork. Then cut into cubes or grind with the help of a grater all cheeses and spread them in layers:

Lightly hold all the layers with palms and sprinklespices. We bake pizza in the oven for about twenty minutes. Readiness is determined by the color of the cake: from below it will start to brown, and the dough itself will turn dark golden. Ready pizza is decorated with basil leaves and served necessarily hot. Note: The traditional pizza dough recipe includes an equal amount of soft flour and coarse flour. You can also use ordinary wheat flour and a special pizza flour. Evenly distribute all cheeses on the surface of the cake is not necessary, this is another feature of the pizza "Four Cheeses." In order for the cheeses to melt and the bake to bake, bake pizza at a temperature of two hundred degrees. Pizza "Four Cheeses", although quite traditional, but its recipe is not democratic. You can choose cheeses to your liking, and to prepare a yeast test, use any suitable recipe. By the way, some include in the recipe for this pizza and tomatoes or tomato paste, which lubricate the dough before laying on it cheese layers. Try and you will cook such an unusual (for us), but such a delicious pizza. Believe me, the result will be enchanting. The main thing is to cook with pleasure. We advise you to read:

Pizza with shrimps: the best pizza recipes with seafood