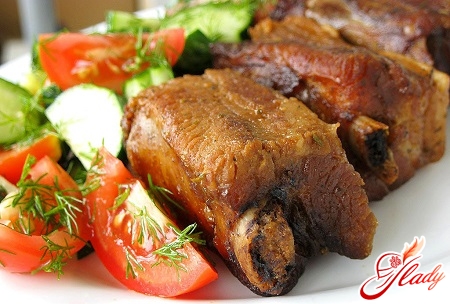 From pork ribs you can cook a lotunusual and juicy dishes. Suitable pork ribs for cooking all kinds of soups (borsch, soup, pea soup), and for roast. The ribs can be baked in the sleeve, cook under different sauces. And what kind of delicacy is obtained from the ribs, baked on the coals! Delicious. Pork ribs, baked on charcoal, millet find for any picnic. Juicy, with a crispy crust and the aroma of a light haze ... But what about this? This dish needs to be tasted! 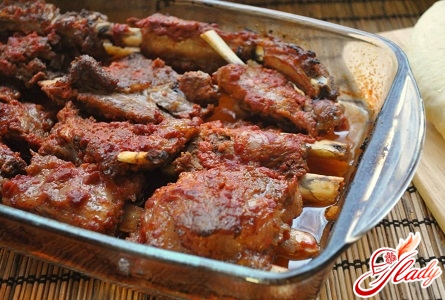 What recipes of dishes from the ribs are the most popular?

Let's start with the ribs-barbecue, the ones with a crustand with a haze. For their preparation, approximately 2-2.5 kg of pork ribs will be required. They need to be chopped into pieces, after which it is good to wash them in cold water and allow them to dry a little (it is better to place them on a paper napkin or towel). After the ribs dry, they must be marinated. The process of marinating should last at least 3 hours. Marinade is prepared in advance. Follow this recipe to make a marinade: 250 gr. ketchup, half a glass of pomegranate juice, 40 grams. sunflower oil, 20 gr. melted honey, 20 gr. wine vinegar, a few cloves of garlic, pepper and salt. After the ribs are marinated, they are placed in a barbecue, where they are fried for 20-25 minutes. In the process of roasting do not forget to turn the ribs and water them with marinade. As for the next recipe, very juicy ribs are obtained, baked in the oven. To make this masterpiece, the brisket of pork should be chopped in such a way that each piece has two ribs. Then they should be rinsed, lowered into boiling salted water (2 liters), and boil them for half an hour (from the moment of boiling). Now the fire must be turned off and the ribs allowed to cool. They should cool down, without getting out of the broth. While the pork meat is cooling down, you can start making sauce. For the sauce you need 40 gr. hot ketchup, sunflower oil, wine vinegar. All is mixed, then in the obtained mixture is added 20 gr. paprika and liquid honey. Then the sauce is again thoroughly mixed. The ribs are lubricated with sauce and placed in the oven on the grate (under which it is necessary to put a tray with a small amount of water). The ribs are baked for 15 minutes at a temperature of 220 degrees. Fresh vegetables and hot sauce are the best addition to baked ribs. 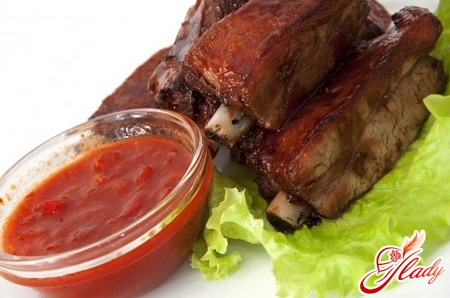 Are there any recipes for ribs for those who like beer? Of course there is!

Beer lovers will appreciate the subtle tasteSnack cooked from pork ribs and vegetables. To prepare an unusually tasty and fragrant snack, you will need a pork loin (1 kg), pre-washed and chopped into pieces. Prepared ribs must be marinated. In the container for marinating, you need to grind the onions (3 bulbs) and a small amount of salt. After the appearance of onion juice, crushed tomatoes (0.5 kg of tomatoes will be enough), chopped Bulgarian pepper (1 piece), chopped parsley (1 tbsp.), Cognac (10-15 gr.) And half a cup beer. Marinade mix well, add prepared ribs in advance and mix again. The process of marinating the pork ribs in time should take about 30 minutes. Ribs marinated at room temperature. After marinating, the ribs are placed on a greased baking sheet, watered with the remains of the marinade and baked in the oven (200 degrees) for 40 minutes. Sprinkle with herbs, snack can be served to the table. Very quickly and easily prepared a variety of soups with ribs. To make soup you need to take a pound of ribs and cut them in such a way that each piece had one rib. The next step in preparing the soup is roasting the ribs. Ribs are roasted in olive oil until a roasted crust is obtained. After that, the fried ribs must be welded. Cooking lasts about 20 minutes after boiling. While the ribs are brewed, you need to prepare the rest of the soup ingredients. Peeled potatoes (3 pieces) are cut into cubes, leeks (white part) - semi-rings, celery with thin slices. Then the crushed vegetables are fried in olive oil (2 tablespoons), the same place is put chopped garlic (2 teeth) and chili (1 piece). The mixture of vegetables is fried for 15 minutes, after which it is added to the ribs. There are two shredded fresh tomatoes, 2 leaves of laurel and green lentils (150 grams), previously washed. After boiling, the soup should be left for half an hour. The soup of pork ribs is almost ready, it remains only to remove it from the plate, add chopped parsley and (after a 10-minute infusion under the lid) the tender soup is ready!

I would not want to ignore the dish,gotten us from a friendly Chinese people. The ribs, cooked according to this recipe, have a gentle, with nothing comparable taste. Having tasted this dish only once, they will want to enjoy more than once. The recipe for this delicious dish: The washed and dried pork brisket (800 grams) is chopped into pieces. The marinade needed for this dish consists of soy sauce (40-60 gr.), Rice vinegar (10-15 gr.), Honey (20-30 gr.), Starch (10 gr.), Red pepper and salt. In the resulting sauce, the ribs marinate for 60 minutes. Then, in a large frying pan in vegetable oil (20 gr.), Grind garlic (3 teeth) and green onions (5 feathers) for a minute. Next, marinaded ribs are added to the pot and stewed for 15 minutes. After the appearance of a crispy crust on the ribs, chicken broth (300 ml) is added to them. Before adding the crushed sweet and hot pepper there, the liquid must completely evaporate. After a 5-minute stewing in a frying pan, the ribs are removed from the fire. Served this delicious dish with boiled rice. Do not forget about fresh vegetables, which are the best addition to rice. If the previous recipes did not suit you, then the following recipe will help you: The easiest way (but not losing the rest of the dishes to the taste) is roasting in a frying pan pre-ground with black pepper and salt ribs. For a more saturated taste, the master of his business advises roasted ribs and put out. And the ribs, which will be baked later, must first be boiled. Indeed, recipes for cooking pork ribs are quite diverse, because each person has his own taste. But from the above recipes, you can choose the most suitable dish for you and serve it on the table.

Recipe lyulya-kebab: how to cook an oriental dish?

Lamb: recipes for your table