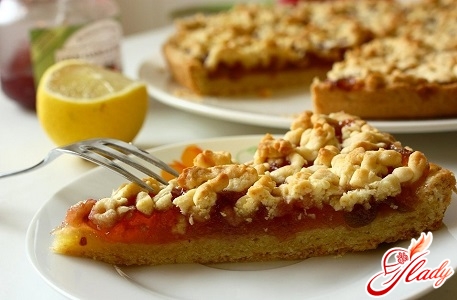 Apple jam has always been and remains one of thethe most affordable and inexpensive types of jam. And interestingly, it is the apple jam that many associate with the unforgettable taste of childhood - the taste of fried sweet pies and homemade pies. But you can also bake a cake with apple jam! Given that the recipe is quite simple, but there are a lot of options, you can have only one difficulty - choose the right recipe! Therefore, we offer you several variations on this theme: a sand pie with apple jam, a delicate biscuit, almost classic yeast and more for a change. Shall we try?

Pie with stuffing from apple jam,prepared from yeast dough, can rightly be called traditional. True, we are a bit breaking the tradition, we will not prepare a normal yeast pie, but a puff. And we use for this recipe, combining sand and yeast version of the dough for pies. Ingredients:

Preparation: The dough is prepared quickly, and the filling is already ready for us. Therefore, beforehand turn on the oven and warm it to 200-220 degrees. Form for baking is also prepared in advance, lubricating it with oil and powdered with flour. Now in warm milk dissolve sugar and yeast and put it in a warm place. Yeast should rise a characteristic frothy hat. While the yeast roam, put the margarine in a bowl and add a little sifted flour mixed with salt. Flours need so much that when mixed with margarine, we get butter and flour. It is convenient to do it, chopping margarine with flour with a knife and just rubbing your hands. Keep in mind that the crumb should not be too dry. When the milk with yeast rises with a frothy cap, pour it into a bowl and continue pouring the sifted flour, kneading the elastic and soft dough. Ready dough should be easy to get away from your hands. Now divide the dough into four parts and alternately roll them into layers according to the size of the baking dish. We lay the first layer and lubricate it with apple jam. Further we put two more layers which also generously promazyvaju jam. The last layer of the test is rolled out a little more than the previous one. Now cover them with a pie, and the extra edges carefully podvorachivaem under the bottom of the dough (the bottom of the pie). Make a few punctures on top and remove the form in the oven. After about an hour our pie will be ready! 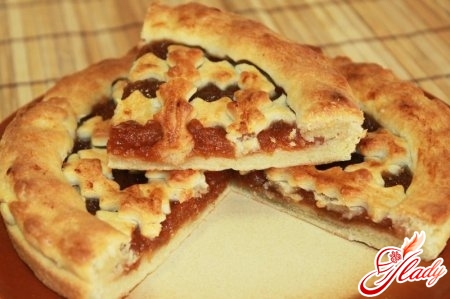 By and large, a sponge cake with apple jamtoo, can be considered a classic of the genre. Biscuits on soda, smeared with jam from apples, were considered one of the most exquisite delicacies in the difficult post-war time. Today, the biscuit recipe consists of a more "luxurious" set of ingredients. But the usual apple jam is still used as the filling. Ingredients:

Preparation: In advance, turn on the oven and leave it to warm up to 200-220 degrees. In the meantime, we begin to make a dough. Sifted flour mixed with baking powder. Beat soft butter with sugar until fluffy. Then add all eggs in the oil-sugar mixture and mix well or whisk at a low speed of the mixer. Now, continuing to stir, gradually pour in the flour. Note that the dough is thick and viscous enough, but it must be well kneaded to a homogeneous and smooth state. Deep rectangular baking dish is covered with parchment paper and put half the dough into it, which is distributed evenly. It is convenient to do with water-dampened hands - then the dough will not stick to them. Now put the form in the oven and bake the first crust for about 20 minutes. Ready to test the sample on a dry wooden stick. We shift the cake to the cutting board, and quickly cool the mold. Then we again cover the form with baking paper and again form the cake from the remaining dough. It is also cooked for about twenty minutes, and then removed from the oven and removed from the mold. Still hot cakes cut off, leveling their edges, and from the cooled off scraps we make a crumb for sprinkling of a pie. When the cakes cool, add them to each other, abundantly missed the top of each cake with apple jam. The upper cake is also sprinkled with biscuit crumbs. Now put the pie under the press for four hours. After that, the press is removed, pie is wrapped in food film and we leave for impregnation for another eight hours (preferably overnight). Finally, the finished biscuit with apple jam again sprinkled with crumbs and served to the table. Note: The cake can be cut into rectangular cakes and sprinkled with not only biscuit crumbs, but also powdered sugar. 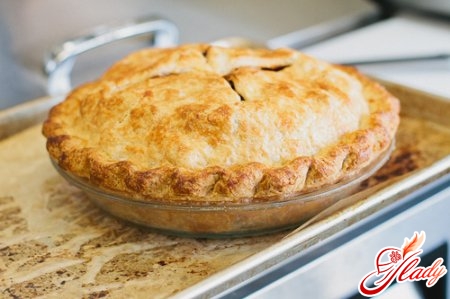 Very interesting recipe. This pie is prepared according to the principle of classic yeast, but the dough is used in this case. Ingredients:

Preparation: We put the sour cream in a bowl and add the vegetable oil. Now mix everything in a homogeneous mass and put the sugar. Next, take the mixer and whisk everything until the sugar dissolves. After that, put the soda, pour the sifted flour and knead the soft, homogeneous dough. Two third doughs are separated for the bottom and walls of the cake, one part is put aside to form the upper grate. Now take the split shape and a little grease it with vegetable oil. Most of the dough is rolled into a round layer, the size of which should be greater than the diameter of the mold. Sprinkle the dough with flour and gently transfer it into the mold. We form the bottom and sides of the future pie. Apple jam mixed with two tablespoons of starch and put it on the bottom of the mold. We turn on the oven, which should warm up to 180-200 degrees. While the oven is warming up, we make the bundles of the remaining dough and lay out of them a slanting grill on the cake. You can still make flowers or any other jewelry at your discretion. We wrap the sides of the cake, forming an even high edge, which will prevent the hot jam from escaping from the pie. Top with poppy seeds and almonds. Put the cake in the oven and bake for about forty minutes. Willingness, as usual, we check the breakdown for a dry toothpick. From the form we take out the pie when it cools down. 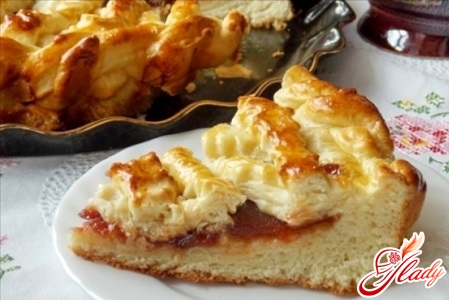 Sand cake with apple jamexists in a variety of options. We offer you a recipe for a simple and quick test, which will allow you to prepare a very delicate friable sand pie. Ingredients:

Preparation: Chilled margarine is put in a bowl and chopped into small pieces. Then add the sugar and sifted flour mixed with baking powder. Hands rub the dough into dry powder. Half the crumbs are poured into a dry baking dish and leveled. Now evenly lay on the crumb apple jam and cover with another layer of butter and flour crumbs. We put the form in the oven, preheated to 180-200 degrees. We bake a cake for about an hour. Ready cooked pie is first cooled in a baking dish. After that, carefully shift it to the dish. Here are some interesting and different recipes for making a pie filled with apple jam. As you can see, you can bake it from almost any test. What did you like best? A biscuit, a sand pie, an open sour cream patty or a variant with a yeast puff cake? Choose a recipe and cook. By the way, you can easily improve any of the suggested recipes or even come up with your own version of such a pie. Do not want to mess with the dough? Use ready-made, yeast or puff. In any case, the pie will be successful. Because apple jam is considered a universal filling, which is perfectly combined with any test. The main thing is to cook with pleasure. Enjoy your appetite and success in the culinary field!

Fritters from courgettes with minced meat is easy

Pie with pears and apples on your table