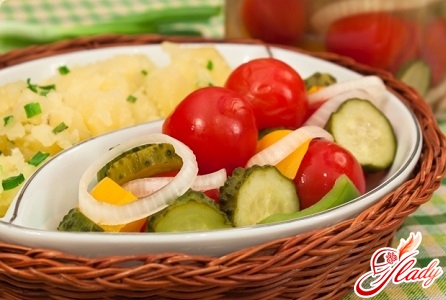 Perhaps, very few people can imagine theira lunch ration on a cold winter's day without such a well-known dish, like pickled cucumbers with tomatoes. Usually every housewife has her own personal cooking recipe, secrets and tricks that are passed down from generation to generation. It should be noted that the dish requires careful preparation, strength and time, but the result is worth it. If you have confidence in your abilities, then you do not need to lose a minute and it's time to start ...

What will it take to make pickled cucumbers and tomatoes?

To begin with, you should prepare what is needed during the preparation, namely: 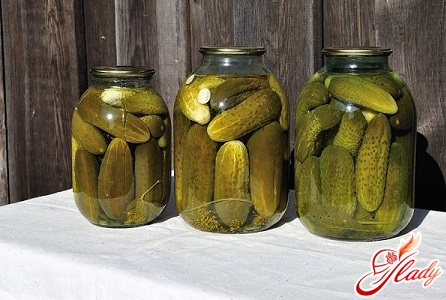 Next, your attention will be offered a recipepickled cucumbers. If you follow all the necessary rules and recommendations, the cucumbers will turn crisp, almost like a bed. So, you should take the cucumbers and soak them for a couple of hours. This is necessary in order for all bitterness to come out. During this time, you can prepare the bank. To do this, it is necessary to wash it thoroughly with baking soda, rinse with running water, turn upside down for a while, so that excess water can drain. After that, lay out the spices. At the bottom of the 3-liter jar we lay a sheet of horseradish, two dill umbrellas, 5 sheets of black currant and cherry, one head of garlic (you can crush), six peas of black pepper. After soaking the cucumbers should be washed, cleaned, cut off the "asses" and put into a jar. Some spices can be placed on top or in the middle. It is recommended to put Bulgarian pepper cut into slices, it will add a more spicy taste to your dish. From above it is required to add vinegar, 1 tbsp. salt, 3 tbsp. sugar with top and pour cold water. The jar needs to be put in a saucepan, slowly bring it to a boil, boil for a few minutes and roll it up. Next, the bank needs to be turned over, wrapped in a blanket and left to cool for a few days in a place inaccessible to children. 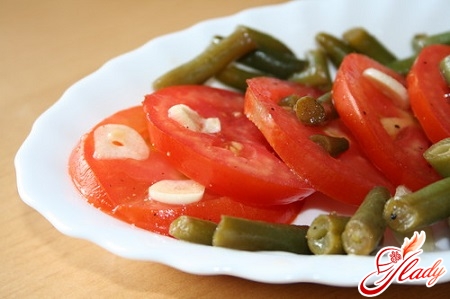 Recipe for pickled tomatoesis different depending on the method of preservation, the amount of salt and sugar. Modern housewives are increasingly using double pouring, not sterilization. Therefore, the marinade will be prepared separately. This will help the vegetables stay solid, keep their size and shape. At the bottom of the sterilized jar, you first need to put a clove of garlic, chopped onions and greens. It is better to take small tomatoes (for example, "Cherry") or pre-cut them into slices. Tomatoes should be thoroughly washed, cleaned, torn off the tails, put in a jar. The recipe for the preparation of the marinade is as follows: add 7 tablespoons to the boiling water (3 liters). sugar, 3 tbsp. salt, 6 peas of black pepper. After the pouring boiled for a few minutes, it will need to be removed from the fire and poured into it 1 cup of vinegar. In the jar, you first need to pour in the oil, brought to a boil, and a hot marinade. Sterilization lasts approximately 15-20 minutes, after which it is possible to roll the jar with a metal lid. In this case, it is not necessary to wrap the blanket with a blanket, but simply wait for it to cool completely.

For cooking assorted cucumbers and tomatoesneed a small strong cucumber and small not too mature tomatoes. Wash thoroughly under running water, puncture the tomatoes through the peduncle with a needle or toothpick, and cut the ends of the cucumbers. In the jar put the greens of dill, vegetables, pour over with boiled water and leave for 30 minutes. Water from the jar can be drained and boiled, adding 1 tbsp. sugar and salt. We put in the can of seasonings, which were indicated earlier, Bulgarian or bitter pepper (if desired) and pour boiling water. In the finished marinade, add 1 cup of vinegar, pour into the jar and roll it. It should be taken into account that the lids should also be sterilized beforehand. Despite the fact that this recipe requires a lot of time and effort, the result will surpass all expectations. After all, it's so nice in a cold winter evening to eat crispy cucumbers, sweet tomatoes, to breathe in the scent of greenery and remember the summer ...

Lecho without vinegar: a recipe for cooking

Pepper stuffed with cabbage for the winter: the most interesting cooking recipes

Salted tomatoes: a recipe for cooking tomatoes in a jar

Horseradish: recipes and tips for use