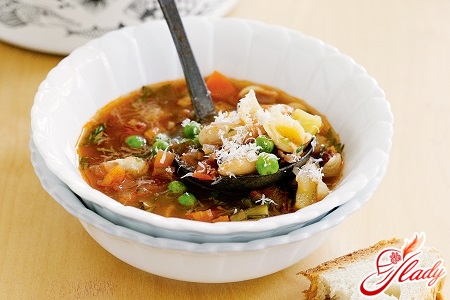 Surely you already know that there is a hugenumber of options for preparing rassolnikov. Each recipe is individual, interesting and tasty, and indeed any of them has a right to exist. Often, to cook this dish, use by-products: giblets, kidneys, stomachs. But for people who do not really favor such meat "delicacies" in their diet, there is an opportunity to prepare this dish on meat broth, and there are no restrictions on the choice of the main ingredient for it. To make such a broth, meat is better to choose the one that is on the bone, so that the soup is more saturated. Anyone can agree - pork, beef, lamb or poultry - of your choice. In addition, the technology of preparing the rassolnik obliges to put in the soup different types of groats. Classical is, of course, the pearl barley, but apart from it you can prefer rice, wheat, oatmeal and even buckwheat. The only thing that remains unchanged in the dish called rassolnik - the presence of pickles and, in fact, the brine itself. To cook this soup, in general, is not very difficult - you should remember only a few simple secrets. Be sure to monitor the amount of salt: given that the dish will include pickled cucumbers, it is very important not to overdo it. The brine volume can be adjusted independently, depending on your taste preferences. Therefore, it will be better if during the preparation you do not salivate the soup, and do it already at the very end, when all the ingredients will give the broth its taste. Undoubtedly, every mistress in her own way prepares her "brand" rassolnik. Some extinguish all the components in turn, others - all together, some of the vegetables are put into the broth raw. But the technology of pickling is always said that the cucumber should be cleaned from a dense peel and must be allowed in a frying pan. 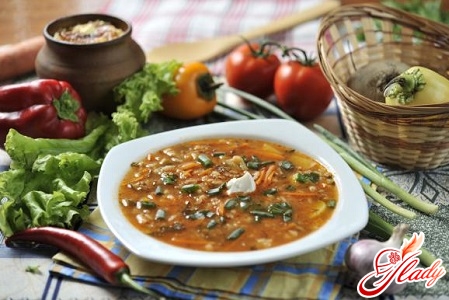 In order to prepare soup "pickle withrice ", using this recipe, you must first decide on what kind of meat you will cook it. We recommend using beef, in extreme cases, pork on bones. Meat after cooking it is better to gently pick and return back to the pan with soup.

Cooking method: To start, you need to cook the meat broth: put the meat in boiling water for 2-3 minutes meat and boil. Then rinse it and collect fresh water for broth. Next, the meat should be cooked under the lid, slightly covering it, about 40 minutes or more. Then you need to add to the broth 1 onion, brushed and cut crosswise, and one carrot. This must be done so that the broth is saturated with onion aroma and afterwards it is tastier. Add the pea pepper, salt and bay leaves. To cook such a broth you need the same amount (40 minutes). Then take out the beef or pork, separate the flesh from the bone, strain the broth, and return the meat back to the pan. The next step will be to prepare the dressing: chop onion, only finely, grate carrots and fry in vegetable oil. With pickled cucumbers, peel, cut into strips and let it sit separately in a frying pan. Note that the recipe includes half a glass of brine, this is an average quantity, so add liquid depending on your taste, you can pour in 20 milliliters if you do not like spicy dishes. In extreme cases, it can be completely forgotten about him, the acuteness of cucumbers is quite enough. Broil the broth on the fire. Peel potatoes, cut into slices and send to a pan. There also put rice washed several times under water. You need to bring everything to a boil, and then cook over low heat, covering the lid. After a while, add the rest of the prepared ingredients: roast and cucumber. It is necessary to cook this soup for at least 15 minutes. At the end, put the chopped garlic, a little butter and turn off the fire. Do not forget about the greenery, it should be a lot. Serve the pickle, putting a spoonful of sour cream in each plate. 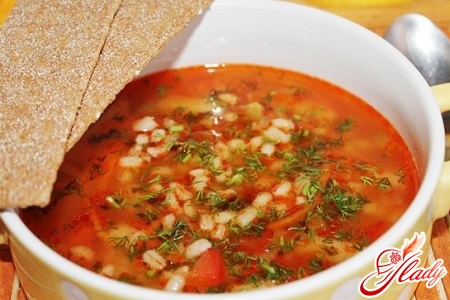 Among the Russian dishes, the popular soup "rassolnik withrice "and chicken meat occupies an honorable second place after the cabbage soup. By the way, remember that the dish can be cooked only on the basis of pickled cucumbers, do not confuse them with pickled cucumbers - it's a completely different way of conservation. Cucumbers add to the soup almost at the very end of the cooking, otherwise they can boil themselves, while the potatoes will remain solid because of the acid. The recipe of rassolnik with chicken is a very good choice, because it is a rather fast dish. Its preparation does not take you much time. Especially if you decided to cook it with chicken. It should not be boiled for long, or rather, it will be cooked simultaneously with potatoes and other ingredients. Ingredients:

Cooking method: The peculiarity of this recipe is that the chicken does not need to be cooked, it is enough to only fry it a bit to ruddy edges along with vegetables. So, cut the bird fillets in small strips. Pour a little vegetable oil on the bottom of the pot with a thick bottom, heat it and put the chicken pieces to fry. Next, you need to prepare a passer-by, and the recipe is the most common: cut the onions finely, grate the carrots, fry together in vegetable oil and after 10 minutes add the tomato paste, then turn off the heat and then set aside. Boil the water, dip the cut potatoes into it, rinse rice cake several times and cook over a small fire. Put fried pieces of chicken into the pan. Cook the ingredients need about 15 minutes, this time is quite enough for the potatoes to fully boil. With pickled cucumbers, peel off if it is dense, then grate them or cut into strips. Send them to the pan with the soup. Add prepared spices, salt, bay leaves. Put the carrots and onions. After 5 minutes turn off the fire and leave the pickle on the stove so that it sticks a little. Serve ready soup with a spoonful of sour cream, sprinkle with chopped fresh herbs. In cooking, there are a lot of different rassolnikov. In our article, each landlady will find for herself the same recipe that you can take as a basis and prepare a unique soup with a slightly acid and slightly salty spicy taste. You can prepare your favorite rassolnik in a vegetarian style, using vegetable broth and the same ingredients. Bon Appetit!